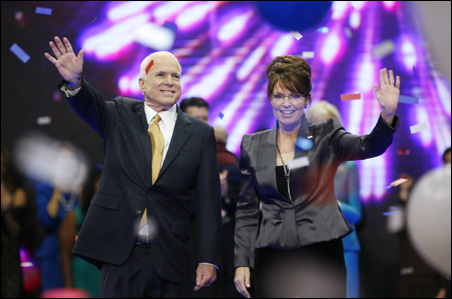 He’s survived years in a POW camp and battles within his own political party.

Now, finally, at age 72, here he was, on the podium Thursday night in the Xcel Energy Center in St. Paul, accepting the Republican Party’s nomination for president.

The cheers were robust. He was smiling.

Then, it happened. In the midst of his great triumph, there was disruption in the stands. Somehow, two or three people in the first level of stands  — presumably members of a women’s anti-war organization called Code Pink — had managed to get through security.

They started yelling something inaudible. They were quickly grabbed and hauled out of the arena.

“I couldn’t tell what they were saying, but they were a distraction,” said Texas delegate Borah Van Dormolen. “Sure glad they got them out quickly. They never made it to the floor.”

Other signs popped up, too. A guest of Van Dormolen, Mary Sergesketter, was in the second deck of the arena.

“There was a guy up there, too,” she said. “He was holding up a sign that said, ‘You Can’t Win!’ He was holding it up for the longest time before somebody finally got him out of there.”

As they were leaving the arena, the protest had been all but forgotten by the women.

Laughing, she turned to her friend.

“And I saw you down there (on the floor) shaking your booty,” she said to Van Domolen. “You were sure having a good time.”

Brief as those protests were, they created an immediate hush in the crowd and grabbed the attention of McCain.

As the crowd chanted “U-S-A, U-S-A, U-S-A!” at the protesters, McCain called for order.

“Don’t get diverted by the noise and the static,” he said.

But it took him a few moments to get back on message.

Mostly the high road
The unstated message was this: McCain will mostly take the high road in this campaign while all around him will blast away at Barack Obama. Starting Tuesday night, almost all of the major speakers at this event blasted Obama  for everything from being a Harvard grad (“elitist”) to being an eloquent speaker (“actions more important than words”).

For his part, McCain presented himself as the magnanimous patriot when referring to Obama.

“A word to Sen. Obama and his supporters,” McCain said early in his speech. “We’ll go at it over the next two months. That’s the nature of these contests, and there are big differences between us. But you have my respect and admiration. Despite our differences, much more unites us than divides us. We are Americans, an association that means more to me than any other.”

Then came a clumsy passage that seemed to be a reference to Obama’s race.

“We are dedicated to the proposition that all people are created equal and endowed to our Creator with inalienable rights. No country ever had a greater cause than that. And I wouldn’t be an American worthy of the name if I didn’t honor Sen. Obama and his supporters for their achievement.”

McCain took a deep breath after wading through that section of his speech and said, “But let there be no doubt, friends, we are going to win this election.”

It’s also clear from this convention that American voters WILL know all about McCain’s years in a POW camp by Election Day.

Day after day, video after video, speaker after speaker poured out the stories of his POW years. Even McCain referred to them, and took a shot at Obama in the process.

“I will reach out my hand to anyone to help me get this country moving again,” he said. “I have the record and the scars to prove it.”

The crowd loved that.

And the delegates were moved again when McCain told them the stories of his years as a prisoner.

“What really sealed the deal for me was when he was talking about when he was a POW,” said Minnesota delegate Nancy Haapoja of Redwood Falls.

Haapoja, it should be noted, had started this long campaign process as a Fred Thompson supporter. She had come to the convention prepared to give her support to McCain.

But now she has her heart and soul in that support.

“When he said, ‘I fell in love with my country when I was a prisoner in someone else’s,’ that did it,” she said. “I said to myself then, ‘This guy’s the real deal.”’

His secret weapon: VP Palin
For now at least, this convention shows that McCain has another campaign weapon: his vice presidential choice, Sarah Palin.

When things were going slow, a speaker needed only to mention the Alaska governor.

Tonight, for example, Cindy McCain was going through her speech about how much she loves being a mother and of how she’s “moved deeply” about people losing their homes and jobs.

(Vanity Fair reported this week that on Tuesday night, Cindy McCain’s wardrobe cost more than $300,000, most of that for the $280,000 diamond earrings she was wearing.)

Anyway, the audience was applauding her politely and then she hit the Palin portion of her speech.

“I’ve always thought it’s a good idea to have a woman’s hand on the wheel as well,” she said.

“So how about Governor Sarah Palin?” Cindy McCain asked.

And the cheers grew louder still.

Her husband got big cheers for Palin references, too.

“I’m very proud to have introduced our next vice president to the country,” he said to cheers. “But I can’t wait until I introduce her to Washington. And let me offer an advance warning to old, big-spending, do-nothing, me-first, country-second Washington crowd: Change is coming.”

A roar of approval.

That ticket — a war hero and a mom who claims membership in both the NRA and the PTA — does seem like a formidable foe.  Certainly, it excited the Republicans in the arena.

But state Rep. Tony Sertich, a DFLer from Chisholm and the Iron Range, said he’s not concerned about the power of this team, not in Minnesota anyway.

“It doesn’t matter that she can hunt and fish,” said Sertich of Palin. “Hunting and fishing isn’t the issue of this campaign. Neither of those helps our economy or gets us out of Iraq.”

Sertich said he was surprised that the economy seldom was mentioned by the Republicans – except that taxes should be cut.

“When I talk to people anywhere in the state,” he said, “the economy and health care are the big issues. These are the bread-and-butter things – and they didn’t talk about them. I was underwhelmed.”

There was something else missing from this convention, Sertich said.

The big applause lines from many of the speakers, including Palin, were based on attacks of Obama.

In fairness, McCain, despite the early disruption, was at his best Thursday night. The crowd was cheering him, cheering him as never before.