I spent some time at the State Fair Sunday looking for Republican National Convention delegates from out of town who might have arrived early and headed to the Great Minnesota Get-Together. I thought they’d be easy to spot – maybe dressed funny. But almost everyone is dressed funny, in some way, so that didn’t work.

I checked at the Republican Party booth; they said they’d seen some delegates from Maryland and Iowa on Saturday, but none were around when I visited.

Mark Giga, a McCain for President staffer working at the candidate’s booth, had run across a few. He said delegates from Alaska, California, Iowa, Maryland and Washington, D.C., had stopped by in the past two days. But again, I missed them.

Then came the phone call that Republicans were holding a press conference in St. Paul to discuss the convention changes brought on by Hurricane Gustav. So, I had to leave the Fair and head downtown, with no delegate pictures or interviews with them about corn dogs or giant pigs or cheese curds.

At least we tried.

What’s wrong with this picture? 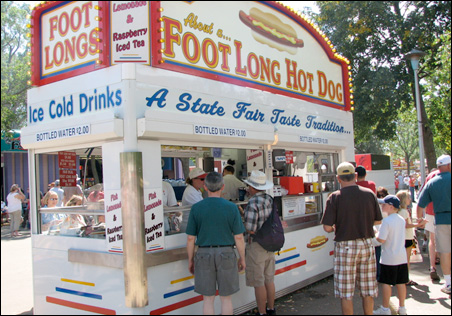 Pictured is the foot-long hot dog stand next to the DNR Building, and ever since I’ve been covering the Fair, it’s been manned by Walt “Speedy” Spidahl.

Sunday was his birthday; he turned 89. And for most of the past 60-some years, he’s spent his birthday at the Fair, first selling skis in the grandstand and then, for the past 50 years, peddling foot-longs at this booth.

He was known for his patter, luring customers in with his description of the length and quality of the wieners, and then asking: “Do you want Norwegian fries with that?”

But he’s missing this year. Walt’s been battling some health problems, and last week he moved back to the family farm near Fergus Falls, so he didn’t make it the Fair.

It was our loss. Next year’s his 90th, and I hope to buy him some mini-donuts on that occasion.