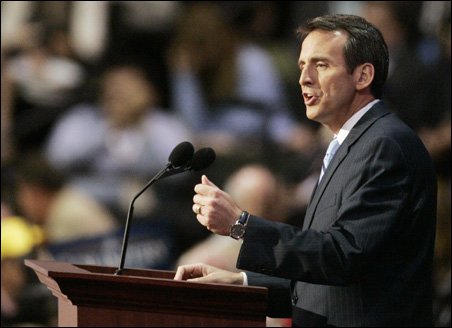 Whatever your political persuasion, it’s hard not to feel a little bad for Tim Pawlenty. Just a week ago, he still thought he might be the next vice president of the United States. Instead, tonight he was back to being just the governor of the great state of Minnesota.

And in that capacity he took the stage at the Republican National Convention and delivered a speech that was, even by the lights of the Minnesota delegates — who still hold him dear — textbook at best.

“It’s a hard act to follow,” said Joe Repya, a delegate from Eagan, referring to the frenzy that greeted Sarah Palin. “Tonight’s not going to be as high-intensity as we all were last night.”

In fact, there was little buzz in the hall leading up to Pawlenty’s appearance — perhaps a hangover from Palin’s rousing turn last night, or more likely just a return to convention business as usual. At any rate, when Pawlenty, in a dark suit and baby-blue tie, strode to the podium, there was a reception that fit a little too well with the idea of Minnesota nice.

The Minnesota delegation stood and chanted “T-Paw, T-Paw!” — a nickname that likely baffled GOPers from other states.

The governor was solid, but failed to light a fire among the delegates. In fact, for a guy who for the last month has been in all the newspapers and on all the cable news networks, both as a speculative veep pick and as an ardent McCain stumper, you’d think the crowd would have been a little more inclined to lend him an ear.

(A handful of Minnesota delegates even admitted to not catching the guv’s moment.)

“It was very consistent,” said delegate Brian Sullivan of Orono, who ran for the party’s gubernatorial nod against Pawlenty in 2002. “It’s what he’s been saying about McCain all along.”

Putting country first
If anyone thought the governor would indicate anything about the veepstakes, he laid those long-shot fears to rest by firmly delving right into backing the Senator from Arizona.

“John McCain’s whole life is a testimony to service, duty, courage and common sense,” Pawlenty said after his opening pleasantries. “John McCain has walked the walk, and he has always put our country first.”

And thus a refrain was born, wherein Pawlenty delivered a line that was capped with “John McCain put country first!” four times, which actually did draw audience participation, with the floor and about half of the arena seats filled.

“And when John McCain is sworn in as the 44th president of the United States,” Pawlenty said, capping that part of his oration, “we know he will always put our country first!”

Pawlenty might have had a case of the nerves, as his voice seemed tight, and there wasn’t much of that wry humor he’s known for. Instead, he served a rather earnest litany of McCain’s attributes and policy positions. He ticked off McCain’s service and POW experience. He noted McCain’s call for the surge in Iraq, which is getting huge play at the convention.

“I recently traveled with John to Iraq, a nation whose destiny he helped change,” the governor said. “I saw first-hand how he loves and admires our troops.”

Overall, there was some touching, if a little dull, rhetoric from Pawlenty, who was a loyal backer of McCain even when the campaign nearly imploded in the summer of 2007.

“John McCain is tough, but he’s also compassionate,” Pawlenty said, in perhaps a vague allusion to the VP vetting process. “I’ve gotten to know John, and I can tell you he is a Purple Heart recipient with a heart of gold.”

“He understands the concerns of everyday Americans like you and me,” Pawlenty said in a windup for a big pitch. “What I like to call ‘Sam’s Club Republicans.’ These voters are on a tight budget. They’re looking for value and accountability at the store. And they’re looking for value and accountability from their government. John McCain connects with Sam’s Club voters.”

And then, oddly … crickets. No reaction from the crowd at all, in what seemed like a line that would connect with those in the hall.

Could it be he offended the country club Republicans in attendance?

“Half of the people in here are Sam’s Club Republicans,” Sullivan said, who isn’t in that tax bracket himself. “Maybe even 80 percent.”

Why didn’t it work with the delegates? “This is not a criticism,” Sullivan said, “it’s an idea, but it’s not a message.”

Tough crowd. Besides, even the Minnesota delegates were still high on Wednesday’s Palin appearance, and discussion almost always turned to that.

“Conventions don’t have much at stake, they’re staged events,” Sullivan offered, referring to how the Palin pick has shaken up the convention. “When she stepped out, there was a wave of emotion.”

Repya agreed. “Don’t write this,” Repya said of the addition to Palin on the ticket, “but my wife hasn’t been this excited since our honeymoon.”

Did Pawlenty’s speech exude an air of disappointment? “Maybe just a little, but the governor realizes that the position he was in was special,” said Chris Jacobson, a delegate from Maplewood. “And he is very special. Right now, it’s just not his day.”

The governor takes a turn in the spotlight