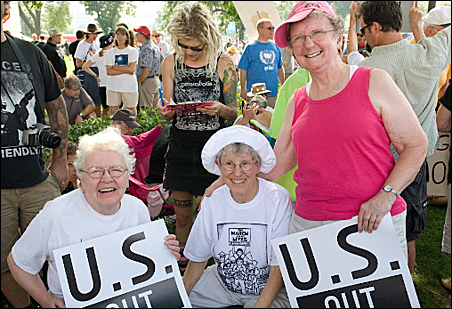 Today’s protest march from the Capitol to downtown St. Paul involved some 12,000-15,000 marchers – and probably half of those have been around for a long time, protesting a variety of injustices, and often since the Vietnam War.

Among the longest-term activists were Mary Ellen Foster, Rosemary Hayes and Rita Foster, all Sisters of St. Joseph, who have taken part in a variety of peace demonstrations for nearly 30 years.

Rita Foster began working with the Honeywell Project in 1980, “and I spent nearly every one of my Wednesdays protesting against weapons manufacturing,” she said. She was “arrested many times, went to jail twice.”

Rosemary said that she “started working against war during Iraq One with Bush One.”

“There are a lot of older people around, but we’re starting to see some younger ones. For a while, there, there weren’t very many.”

The three women were sitting in the shade of the biggest tree on the Capitol lawn, hiding out from the heat of the day, and reminiscing about the early protests, listening to the occasional Bob Dylan tune, interspersed with rap music. “Marv Davidoff got us started in it,” Rita Foster said. “He’s probably around here someplace. He’s been going on forever.”

Old stand-bys
Although many of the rally groups were relatively new – Somalis protesting Ethiopian occupation, Ethiopians protesting “the Tyrant” who runs Ethiopia, Latinos protesting American immigration laws, Palestinians protecting Israeli occupation, Colombians protesting death squads, Dakota Indians protesting the violation of Indian treaties, Ron Paul and Ralph Nader activists handing out leaflets, Code Pink anti-war activists, Obama supporters, and one brave woman who carried a sign that urged, “Victory – Let Our Soldiers Win” – there were also some old stand-bys: the socialist workers, the anarchists with their red-and-black flags, a scattering of Vietnam Veterans Against the War. And all over Capitol Hill, there were older people shaking hands and slapping backs, telling and retelling old anti-war stories.

Among them was Minnesota’s best-known, longest-term anti-war activist, Marv Davidoff, the very man mentioned by the Sisters of St. Joseph. Davidoff was involved in an animated discussion with another old anti-war pal, Bruce Gagnon, now the coordinator of the Global Network Against Weapons and Nuclear Power in Space, based in Brunswick, Maine.

“This is my 56th year of full-time organizing, and honest to God, I don’t know exactly how I did it,” Davidoff said.

Gagnon, an activist for 30 years, thought it might have something to do with Davidoff’s sales ability: “I can remember once, we had a meeting in New York City, and we’d just go out on this pier and listen to Marv talk. He can talk.”

They agreed that there was a large amount of gray or graying hair at Monday’s rally, but Gagnon said, “Listen, a lot of young people are starting to come out, and there’s more all the time. The way this economy is running, we can’t afford to pay for anything but the war, and these kids are going off to college and coming out $45,000 in debt. Some of them are choosing to go along to get along, you see that, but a lot of them are deciding for resistance. They see what’s happening and they are not going to go along.”

Though Davidoff has had some health problems over the last few years, he says he plans to keep working until he dies. “I’ve told them, going to these activities, if I die on the bus, just drop me off, plant a flower or something, and then…keep going.”