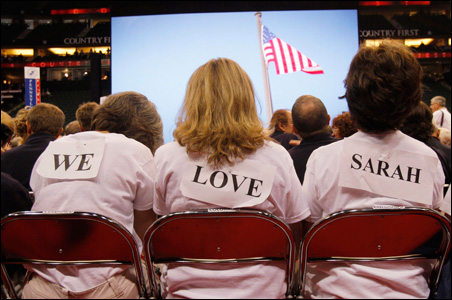 Five Republican women leaders today took on the media, Democrats and bloggers in a presidential campaign version of gender wars.

At a special briefing called by McCain campaign officials, they stressed the executive experience of Alaska Gov. Sarah Palin, their candidate for vice president, and called for an end to what they consider sexist and demeaning comments about her.

The event took place just hours before Palin is to address the Republican National Convention in her highly anticipated acceptance speech, which is sure to be scrutinized line by line by political pundits, friends and foes.

Meanwhile, in a separate Fox News interview today, Meg Whitman, McCain’s national campaign co-chair and former CEO of E-Bay, expressed a sharply opposite view from those of the five women. She said she didn’t think there had been any real sexism in the coverage of Palin and called the media vetting of Palin “completely fair,”  and the right thing to do for a vice-presidential candidate.

Palin questioning deemed out of bounds
At the briefing, however, the five women — with resumes in business, politics and motherhood — were emphatic in their distaste for all of the questions about Palin’s family, her daughter and her ability to do her job while raising a still-young family. They said such heightened scrutiny should be out of bounds in the current political debate.

Speaking to about 200 journalists, mostly men, at a noontime event, the women stressed Palin’s strong executive experience — as the six-year mayor of the small town of Wasilla and nearly two years as governor.

“She’s more prepared than Barack Obama to be president,” former Massachusetts Gov. Jane Swift told the reporters. “Barack’s executive experience, as he himself has said, is running a campaign.”

Swift said Palin has taken on corrupt special interests in Alaska, and addressed issues important to women, such as school financing and energy independence.

And, Swift and others said, she’s the most popular governor in the nation.

She downplayed media inquiries about the pregnancy of Palin’s 17-year-old unmarried daughter and questions about how a mother of five — the youngest an infant with Down syndrome — would have time to be vice president or president. “Just like me, Gov. Palin loves her children,” Swift said. “Let’s leave it at that.”

“Republicans will not stand by while the governor is subjected to sexist remarks,” she said. “As women, all of us are sensitized and outraged when we see sexism like this.”

Rosario Marin, former U.S. treasurer, said she has a Down syndrome child, now in his 20s.She said she is “incensed, offended and insulted that the media made much to do of that” in Palin’s case.

‘Shame on them’
“For the media and bloggers and the other side to even make the comments they made, shame on them,” she said.

U.S. Rep. Marsha Blackburn of Tennessee said the “media continue to attack conservative women in an attempt to diminish them.”

As an African-American woman, Renee Amore, deputy chairman of Pennsylvania’s Republican Party, said she understands racism and sexism. “And a lot of the things going on around Gov. Palin are sexism.”

She also said that media smears of Palin and her family situation are meant to “distract the American people from the fact that Gov. Palin has more executive experience than Barack Obama.”

Then she admonished the media for what she called unfair reporting about Palin.

Fiorina also said that she and the other Republican women have been portrayed as “showhorses, not workhorses.”

“We welcome discussion on her track record … but it’s not legitimate to smear her with falsehoods that have been demonstrated to be false; it’s not acceptable to refer to her as a good showhorse, a good cheerleader, and not experienced,” Fiorina said.

Several times, the speakers contrasted Palin’s executive experience with Obama’s role as an activist and legislator.

A reporter then asked if the women thought  McCain — a U.S. senator for 22 years and a House member for four years before that — had ever run anything to give him executive experience.

Yes, Fiorina said, he ran a squadron in the U.S. Navy.