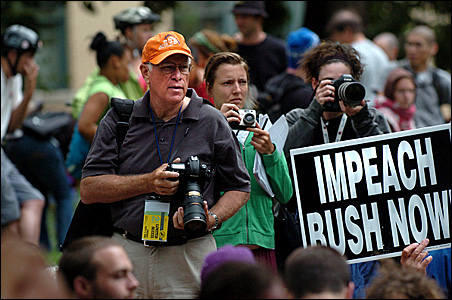 Thirty-nine years ago — it doesn’t seem possible that time has gone this quickly — in the midst of a really murderous race riot in Cairo, Ill., an elderly man tried to strangle me with my own camera strap; but he was in his 70s or 80s and old, and I was in my mid-20s, and I got loose and hurried off down the street and out of sight.

Bad as it was, Cairo was where I learned to enjoy the distant scent of tear gas.

One notable thing, although it didn’t seem so notable at the time, was that I was the only reporter there when the old guy tried to strangle me. Reporters would come through from the Paducah paper, from time to time, or the St. Louis Post-Dispatch, but basically, it was one or two guys at any given time. As a young reporter for the Southeast Missourian of Cape Girardeau, Mo., I had lots of things to do, and only made it to Cairo a half dozen times, and never saw another newsman or TV crew.

If there were to be a similar race riot in Cairo today, you couldn’t get a hotel room south of St. Louis, and there’d be satellite trucks stacked up like cordwood down Washington Avenue.

Maybe the first real changes came with Kent State, and the famous photograph of the young girl calling for help for a kid who’d been shot by National Guard troops. That year I covered riots at the University of Iowa that closed the school and involved serious confrontations between National Guard troops and students. More tear gas.

Working for the Miami Herald in 1972, I covered street action for both the Republican and Democratic national conventions in Miami, and saw probably the most violent conventions ever — more violent than even 1968 in Chicago. The last night, the night that President Richard Nixon flew into accept renomination for the presidency, downtown Miami Beach was a battle zone, with kids and cops fighting each other through a haze of gas.

By then, there was lots of media — lots of TV crews, lots of still photographers, hundreds of reporters. The numbers continued to grow over the years…

New media
And then came the Internet, and the diffusion of “The Media.”

Now, there are two medias — the MSM, or the “Main Stream Media,” as they call it on the net, and the sort of Off-Broadway Media, and the Off-Off Broadway media, and the Far-Off Broadway media. These folks may be working for outlets as big as national news organizations, and as small as individual political blogs. But they all call themselves, “Media.”

Not only do they call themselves that, they make sophisticated media IDs on their laptops, and take the file to Kinkos and print them out on color laser-jets, and embed them in plastic and hang them around their necks on nylon cords…and there they are.

Some of them are pretty interesting. Covering the protests in St. Paul this week, I saw a woman with a media card around her neck who was dressed neck-to-toe in army surplus, had a motorcycle helmet on her head and wore a mask like the Lone Ranger’s. I saw a big silver-haired guy in a huge photo-vest with the pockets packed full, shooting a cell phone camera. I saw a two-person video crew, a small attractive young woman and a tall rangy young man, and when something was going on during a march, the woman would sit on the man’s shoulders, and run the camera, while the man maneuvered through the crowd to give her best shot. The CBS crews could learn from those two.

But the problem is, a lot of these new guys don’t know what to do in a riot.

So here’s a list from a long-time riot aficionado, who would prefer not to see anybody get hurt. Especially media people. However off you are.

1. Always — ALWAYS! — know where the cops are and what they’re doing.
St. Paul cops busted an AP reporter by accident a couple of days ago; he was pretty experienced, but he apparently lost track of where he was, exactly, and he wound up on his back. That happens if you don’t take great care. They’ll usually let you out of jail pretty quickly, though.

2. Don’t mess with riot cops during a riot.
A San Francisco radio talk-show host did that, and she got busted. One of her associates described the arrest as brutal. I saw the tape and I’d call it “gentle.” She got lucky. Cops don’t have time to listen to windy explanations during a riot, and if you deliberately push into them, as she did, you’re toast. Don’t do that. Be polite. Smile. If you need to talk to them, look for a guy with stripes, or a silver bar or two. You gotta remember, the cops get scared and angry, too.

3. Always — ALWAYS! — know where the Little Assholes are.
Most people in protest mobs are pretty sincere, and don’t want to fight cops or break things. But there’s a subset of most any anti-war mob, the LAs, who are similar to the football hooligans in Britain. They are there to break things for their own entertainment. They don’t have much real interest in politics — they’re just LAs. You can pick them out because they wear fashionable bad-ass street dress — black or olive drab, boots or heavy running shoes, bandanas, hoodies. They tend to pierce themselves a lot. The dress is usually pretty worn, and they tend to cluster; so look around the crowd and when you see a sudden darkening of dress, you’ve found the LAs. You need to know where they are, because when they start breaking things, that’s your film-at-six.

4. Very important. Learn to walk backwards.
You’ll notice that in the best riots, the real pros spend a lot of time walking backwards, but rarely run into anything. That’s because they’re pros. If you don’t know what you’re doing, you can walk backwards into a parking meter and damn near kill yourself.

5. All riots have their own geography, or shape.
When you find the LAs, watch their relationship with the cops, and find an angle where you can see both. When the trouble starts, you want to be close enough to see and hear, but not so close that you suddenly get cut off and find yourself with no place to run.  You need the room to wheel. You don’t want to be the first guy to arrive at trouble, before it has a chance to shape up — you don’t want the cops to unexpectedly come in behind you. Be the fifth or sixth guy to arrive, after you know how things are shaping up. If a real fight gets going, people tend to run in the channels — the streets. If you’re absolutely caught, get your back against a wall, your hands in the air, and looked scared. There’s a good chance everybody will ignore you.

6. Listen carefully.
Breaking glass or sudden gusts of screaming means good photography. If you hear loud pops, that’s probably flashbangs meant to frighten people, but it could be gas. Gas can mess you up, if you get too close. If you get gas, try to run out of it. It’s usually pretty local, so if you can run 50 yards, holding your breath, you can often get out of it. It’ll still burn your skin a little, but at least it’s not in your lungs. Bandanas are useful for dipping in water and washing your skin, and for concealing your identity, but I can tell you, they’re no damn good for breathing through in a gas attack. Of course, loud pops could mean shooting. If there’s been shooting, then the photography could bring a Pulitzer, but it could also get you killed. That’s decision time. If you’re a true media, run toward the loud pops. Just don’t be the first to arrive. (See rule 5.)

7. Dress right.
If you’re really going to get your ass whipped, it’ll more likely be by the cops than by the protesters, because the cops are better at it. Therefore, dress for the cops. I recommend khaki slacks and a golf shirt; something that sends a fairly respectable middle-class message. Neat jeans and a golf shirt or a collared shirt will work. You don’t want to push it too far — if you wear really nice grey slacks, an oxford cloth shirt and a sport coat, some LA might throw a bottle of urine on you. You want to look exactly like a semi-intellectual media. Or would it be a medium? Also, listen — if you’re going to be a media, you’ve got to get something better than a photographer’s vest and a $59.95 digicam.

8. Given a choice, at a riot, it’s better to be a reporter than a photographer.
A reporter can put his notebook in his pocket and impersonate an innocent bystander. A photographer is stuck with a lot of equipment, and if the mob turns ugly, that can get you in trouble. If you’re a reporter, keep track of the photographers with flash units; they tend to attract attention to themselves, as do TV cameramen with their lights. Keep a little distance. If you’re a reporter with a cameraman, and things get ugly, and he asks you where you’re going, tell him you have to check something out. I’m not saying that photographers are dumber than other people, but they are the folks who walk around with brilliant white lights in nighttime riots.

Follow these simple media rules, and you probably won’t get hurt, and you’ll probably get the story. Best of all, you’ll also look like a pro.

If you have to do something silly — like, say, have your lips pierced by five silver rings, dress in black capri pants with 10-inch paratrooper boots and an Army camo jacket, and you’re shooting a Samsung digicam, so you look exactly like an LA even if you aren’t one — well, take bail money with you.

And maybe add a helmet to your ensemble.

How to cover a riot