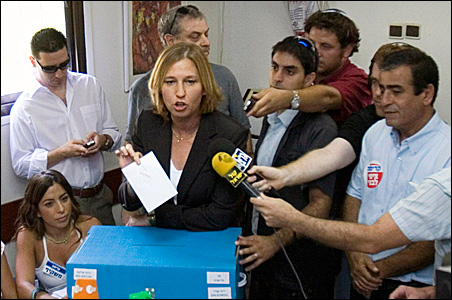 With Israeli Prime Minister Ehud Olmert about to step aside amidst corruption charges, his Kadima Party votes today on a new leader — with the strong possibility that Israel will have its first woman leader since Golda Meir 35 years ago.

At stake in the election is the future of the Israeli government, whether national elections will have to be held sooner rather than later and, most importantly, the status of the struggling peace talks with the Palestinians and Syrians.

“The next leader of the centrist Kadima party must hold together the fractious coalition, build a new one or face new elections. There is skepticism even among Kadima ranks that a coalition will hold; the leading candidate is campaigning partly on the theme that she is best-suited to lead the party into a general election. Independent polls show Foreign Minister Tzipi Livni with around a 15-point lead over her nearest rival heading into Wednesday’s primary. But she may not have enough support to win the four-candidate race outright. That would force a runoff next week.

“Her main rival, Shaul Mofaz, Israel’s transportation minister, is promising to buck the polls. The former head of the Israeli Defense Forces is touting the strength of his grass-roots political machine, including strong support from trade unions.”

“The challenge for the winner will be the same problem that has faced almost every ruling party leader in Israel since the Jewish state was founded 60 years ago: how to cobble together a governing coalition. Since Kadima won more seats than any other party in the March 2006 general election, Olmert’s coalition has gone up in number and gone down but, crucially, always stayed above the magic mark of 60 needed to rule the 120-seat Knesset. At present it stands at a relatively healthy 67 with Kadima buttressed by leftist Labour, the ultra-orthodox Shas party and a party representing pensioners’ interests, Gil.”

He says that the “elephant in the room” during negotiations with the Palestinian Authority has been the future of Jerusalem, which both sides claim as their capital and which contains holy places for Jews and Muslims alike. “The merest whiff that the Jerusalem Issue has even been talked about, let alone dealt with, would cause Shas to flee the coalition,” Butcher says. At the same time, Mofaz’s reputation as a hardliner “puts him at odds with Labour, whose leader Ehud Barak, could well decide to pull his support of a Kadima-ruled government led by Mofaz.”

Ethan Bronner of the New York Times explains the uncertainty surrounding the election:

“Much about the Wednesday primary and its aftermath is still up in the air, partly because Kadima is less than three years old. It was formed by Prime Minister Ariel Sharon before he fell into a coma caused by a stroke in early 2006. Mr. Sharon had been a leader of the right-wing Likud party but, like Ms. Livni and Mr. Olmert, who also began on the right, became convinced that the only way for Israel to maintain its status as a Jewish democratic state was to end its occupation of Gaza and the West Bank, where a total of nearly 4 million Palestinians live.  In Israel, left is distinguished from right largely by the amount of land one is willing to yield in the name of peace with the Arab world. The more one wants to give up, the further to the left one is said to be. Kadima — the name means forward — came to life declaring itself to be in the center.”

In the wings: Netanyahu
He also points out that waiting in the wings should a national election be called is former Prime Minister Benjamin Netanyahu, leader of the right-wing Likud Party, from which Sharon, and his protégé, Livni, bolted in order to try to cut a deal with the Palestinians.

Livni has been the subject of much discussion in Israel for months. She was the lead negotiator in the talks with the Palestinians. She is trying to buck the political establishment, long dominated by men who were former generals. She has cultivated an image of a clean politician when the leader of her own party may be prosecuted on corruption charges. She was recruited by Sharon.

“She is projecting herself as the fresh face of a new national politics. Speaker after speaker at the Haifa meeting (of Kadima members) stressing her ‘Mrs Clean’ image, untainted by the kind of corruption allegations that have brought Mr. Olmert to the brink of an indictment, echoed her own assertion that the wider electorate are ‘willing to vote for me to restore their trust in politics.’ Certainly the polls suggest she is easily Kadima’s best hope of confronting a powerful electoral challenge from Netanyahu’s right-wing Likud. ‘It’s Netanyahu or Livni,’ the local Kadima chairman Itzik Regev told the meeting. ‘There are no other options.'”

In a profile of Livni last week, National Public Radio’s Eric Westervelt says that her life “has been shaped by contrasts. She grew up in freewheeling, left-leaning Tel Aviv, yet her parents were heroes of the right-wing Irgun — militant, pre-state Jewish guerrillas who used what could be described as terrorist tactics to try to force the British out of Palestine. Livni’s father raised her to believe that all of British Mandate Palestine should be the Jewish homeland, and she grew up on that dream of holding on to the West Bank land Israel captured in the 1967 Six-Day War. …

“Dita Kohl-Roman, a close friend of hers, says Livni realized Israel could not maintain its Jewish majority and identity if it clung to all of the West Bank. She said ‘though for me the greater Israel is the dream. I have to give up that dream because it is more important for me to have a democratic state, therefore I want to have a Jewish national home in Israel and I know I have to create the same thing for the Palestinian people,’ Kohl-Roman says.”

Committed, but in no hurry
While she is committed to talks with the Palestinians, Livni “warned she would not be hurried into a deal,” writes Rory McCarthy in the Guardian of London. “Livni also takes a tough position on Iran and its nuclear ambitions. ‘Time is of the essence. … Sanctions are effective but the current sanctions are not effective enough,’ she has said.”

And Carolynne Wheeler writes in the London Telegraph that Livni “is determined to ensure that nobody assumes that the presence of a woman at Israel’s helm might leave the country more susceptible to attack. Ms Livni has made plain that she is likely to end the indirect talks with Syria, brokered by Turkey and made public only in May, bringing to an abrupt halt one of the few innovations of the outgoing prime minister, Ehud Olmert. In her harshest statement yet on the matter, during a rare interview with the Al-Arabiya television network, Ms Livni said last week she has ‘no need to meet with Syrian representatives’ as long as the country continues to allow weapons smuggling to Hizbollah in neighbouring Lebanon.”

Israeli politics is not for the faint of heart. Livni certainly has her detractors, and they mince no words. Caroline Glick writes in The Jerusalem Post:

“Foreign Minister Tzipi Livni may not be a crook, but she is a fraud. And if polls are to be believed, Livni the fraud is just one fraudulent election away from becoming our next prime minister. Her basic dishonesty is expressed both in her political maneuverings and in her behavior as a policymaker. In both areas, she upholds herself as Mrs. Clean — the servant of all of us who are sickened, demoralized and revolted by Prime Minister Ehud Olmert and his hordes of corrupt Kadima colleagues and staffers. But she is not our servant. Rather than serve us, like Olmert and her Kadima colleagues, she lies to us in a continuous bid to expand her power.”

A different perspective
But in an editorial, the left-leaning newspaper Ha’aretz sees a different Livni.

“Livni is the most thoughtful and explicit spokeswoman for the concept of the ‘Jewish and democratic state,’ particularly because she ascribes equal weight to both these attributes and does not see a contradiction between them. In Livni’s opinion, if we do not arrive at an agreement for a division into two nation-states between us and the Palestinians, we will eventually have to choose between protecting the state’s Jewish majority by undemocratic means and protecting democratic principles at the expense of the country’s Jewish character. It is this scenario, which could result in a binational state, that Livni is trying to prevent. It is difficult to find someone among the Kadima candidates who is more involved and committed than Livni to negotiations with the Palestinians.”

Amidst the political and social chaos that often characterizes Israeli-Palestinians relations, The Times’ Ethan Bronner last week offered a bit of optimism from Jenin, a West Bank city that was the site of a violent Israeli-Palestinian confrontation in 2002:

“From that rubble, now newly trained and equipped Palestinian security officials have restored order. Israeli soldiers have pulled back from bases and are in close touch with their Palestinian colleagues. Civilians are planning economic cooperation — an industrial zone to provide thousands of jobs, mostly to Palestinians, and another involving organic produce grown by Palestinians and marketed in Europe by Israelis. Ministers from both governments have been visiting regularly, often joined by top international officials. Israeli Arabs are playing a key role. The aim is to stand conventional wisdom on its head. Instead of a shaky negotiated peace treaty imposing coexistence from the top down, a bottom-up set of relationships that lock the two societies together should, proponents argue, lead to a real two-state solution.”

Key dates leading up to today’s election, from the BBC:

May 2007: Report criticizes Olmert’s handling of war (with Hezbollah). Calls for resignation.