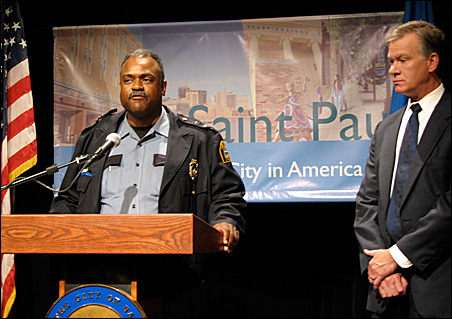 St. Paul police will be in a state of “relaxed readiness” as they monitor this afternoon’s giant anti-war protest that will take an expected 50,000 marchers from the state Capitol to the Xcel Energy Center in downtown St. Paul and back.

But because Hurricane Gustav has caused Republican officials to truncate today’s activities at the Republican National Convention, it’s unlikely many delegates will witness the march.

On the route, officers in normal uniforms will direct traffic, ride horses and shadow the marchers on bicycles, said Police Chief John Harrington at a morning press briefing.

But also on site will be “mobile field forces” with protective gear and nightsticks.

“Unless there’s action that requires their presence, they will stay in the relaxed-and-ready mode,” he said.

St. Paul police did arrest one man Monday morning, a participant in the Iraq Veterans for Peace march in downtown St. Paul.

Harrington said the man had hoped to be arrested.

“Beforehand, he told us: ‘Just so you know, I intend to be arrested.’ At the end of the march, he made a move and we arrested him” for trespassing, Harrington said.

The police chief said he told his officers that the convention is like the world’s biggest wedding: They’ve been preparing for months, and now the big day has come.

St. Paul Mayor Chris Coleman stressed that the city and police officers are prepared for peaceful protest and even welcome the protesters as an important part of the democratic process.

“Protest peacefully and we welcome you, but civil disturbance, or trying to shut down transportation or commit criminal acts, we will not tolerate that,” Coleman said.

“We will not tolerate lawlessness in St. Paul,” Harrington repeated.

Asked if with the first day of the convention shortened, protest leaders might try to ramp up their activities to steal the day’s news cycle, especially with so many national and international media members in town, Harrington said: “I hope not.”

Coleman and Harrington said they hope that lots of energy and concern — from both protesters and delegates — will be directed southward, toward the storm victims.