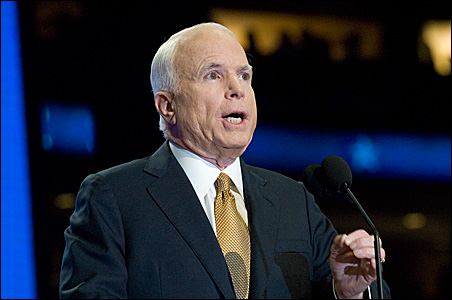 John McCain’s speech on Thursday night had a familiar ring to it. In selling himself as a conciliatory governor of Texas during his 2000 race for the presidency, George W. Bush said many times that he was “a uniter not a divider.”

Now McCain, a member of Congress for 26 years and captain of a campaign jet he calls the “Straight Talk Express,” has cast himself as an outsider bent on changing Washington’s corrupt and partisan ways. Discounting the Republican control of the White House for the last eight years and of Congress for most of that time, and not mentioning his recent record of voting the administration’s line, McCain said that the Republican ticket would bring the change that Washington and the country needs so badly.

“Americans want us to stop yelling at each other,” he said after a heckler briefly disrupted his address. He and his vice president, Sarah Palin, will “shake up Washington,” he said. “When we tell you we’re going to change Washington, and stop leaving our country’s problems for some unluckier generation to fix, you can count on it.”

Trying to reclaim his maverick reputation, McCain criticized his own party. “We were elected to change Washington and we let Washington change us. … The constant partisan rancor that stops us from solving these problems isn’t a cause, it’s a symptom. It’s what happens when people go to Washington to work for themselves and not you.”

After winning a tough election, McCain said he’ll reach out to “any willing patriot … to get this country back on the road to prosperity and peace.”

All in all, it was an audacious tactic, similar to one taught by the U.S. military: When you are on patrol and ambushed by the enemy, don’t duck and cover but turn directly into the attack and charge up the hill firing your weapon, acting as if you are the attacker. It’s a lesson that Republicans have learned well and have taken into battle this fall.

On Thursday night in St. Paul there was no defense of the incumbent’s record and hardly a mention of the word “Republican,” owing to the polls’ revelations that less than 30 percent of the voting public identifies with the GOP. It was as if the Bush-Cheney-Rumsfeld misadventure had been the work of aliens and the party’s eight years of  economic policy had had no impact on the shape of the economy.

On PBS, columnist Mark Shields picked up on the disjuncture, pointing out that McCain has cast himself as an insurgent bent on shaking up Washington by prescribing the same old line of policy solutions.

His analytical partner, the New York Times columnist David Brooks, took McCain’s speech as far less cynical. “Political parties usually reform in the wilderness,” he wrote in today’s column. “They suffer some crushing defeat, the old guard is discredited and the pain compels turnover and change. John McCain is trying to reform the Republican Party before a presidential defeat, with the old guard still around, and with a party base that still hasn’t accepted the need to transform.

“The central drama of this week’s convention,” he wrote, “was the struggle by reform Republicans to break through the gravitational pull of old habits and create something new.”

‘Something new’ not spelled out
McCain, however, did not spell out what that something new is. If there are fresh policy ideas out there that both parties can agree on, he didn’t mention them. The “go-it-alone” tone of the Bush years won’t disappear just because McCain — or Barack Obama — says it should.  Ideas are required.

The stock market took another big tumble on Thursday, and today the government disclosed that the unemployment rate has hit a five-year high.

Obama says that the GOP must account for its failure and he claims the party is out of ideas. But maybe not. Maybe the freshest of all ideas is the one McCain and Palin showcased this week: paint themselves as a team of reformers, one from within the Beltway that the other from as far outside it as you can get. Out-change the changers and go light on the details. Emphasize instead your status as a national hero and hockey mom. People will admire you and vote for you. And opponents will hesitate to criticize a 72-year-old hero and a mother who’s trying her best.

But even that hasn’t stopped critics in the media, at least not yet. “Americans on Thursday night saw the John McCain pretending to be the old John McCain and not pulling it off,” the Times said in this morning’s editorial. “The Republicans have spent the week trying to co-opt Mr. Obama’s talk of change and paint themselves as the real Americans.”

Karl Rove’s “apprentices are now clearly in charge of Mr. McCain’s campaign,” the Times claimed, mentioning Mitt Romney’s speech attacking ” ‘liberal Washington,’ which his party has dominated for most of the last eight years.”

Amazing incredulities
Indeed, this was a week of amazing incredulities at the Xcel arena: Romney denouncing the nation’s “Eastern elites.” McCain’s selection of Palin turning out to be not a pander to women but a tribute to her experience. Unwed teen motherhood changing from a shameful reflection on bad parenting to a shining example of family values. The mere happenstance of being from a small town morphing into a reason to vote for a ticket that looks a lot like you. The Twin Cities convention was a transforming event in many ways.

It’s exciting to believe that the Republican Party has become the force of change, but without authentic evidence it’s hard to swallow. Even Michael Gerson, the Washington Post’s conservative columnist, was unimpressed.

“I praised Sarah Palin’s speech as a Republican revelation,” he wrote. “I have written admiringly about John McCain’s political independence and shockingly courageous life story. But McCain’s speech tonight began slow and got slower (before its genuinely moving end). He set out a strong, overarching theme of restless reform — then undermined that with uncreative, typically Republican policy. The speech was not a flop; it was a missed opportunity. But in a come-from-behind race, every missed opportunity is costly.”

The liberal blogger Arianna Huffington said in today’s post that believing McCain’s reformist rhetoric will require a serious case of amnesia. “You’d think it was the Democrats who occupied the White House the last seven-plus years and it was time to throw the bastards out,” she wrote.

“Given that 82 percent of voters believe we are heading in the wrong direction, it’s a logical position to take. But for the American people to buy into the notion that McCain, who has raced to Bush’s side on tax cuts, on off-shore drilling — even on torture — as this campaign’s agent of change, it’s going to require an incredible suspension of belief. Or a serious case of amnesia.”

“McCain tried to get voters to remember that man in his acceptance speech last night, the one who ‘worked with members of both parties to fix the problems that need to be fixed.’ But that man has disappeared.”

The Dallas Morning News wondered if McCain can win by playing second fiddle to Palin. McCain’s speech came across as an “afterthought,” today’s editorial said. “This was John McCain’s convention, but Sarah Palin stole the show.”

The Orlando Sentinel was lukewarm, calling it “a decent speech” that promises to make the next two months “a more interesting and competitive campaign.”

Today’s Washington Times editorial cast the coming campaign as a battle for the hearts and minds of women, with Palin, not McCain, leading the way. “Mrs. Palin is bolstering Republican support for McCain. Nonetheless, she will have a steep road ahead in convincing women voters of all stripes that she is also their champion.”