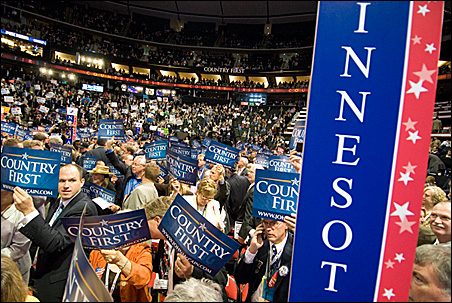 The big buzz at the Minnesota delegation’s morning reception today was Tim Pawlenty’s appearance, but the rest of the featured speakers constituted what more than one delegate referred to as an all-star lineup.

“Well, we’re being spoiled,” delegate Angela Erhard said of the cast of speakers.

“The host delegation gets a little more spoiled than the other delegation,” added delegate Marty Seifert, the state’s House minority leader.

“We’re honored to have a long list of very prominent people, and it might be a recognition of Minnesota as a swing state,” said delegate Dave Senjem, the state’s Senate minority leader. “I don’t know that other states get this kind of show.”

Beginning with Pawlenty, speakers rushed through their speeches in under 10 minutes, due in equal measure to stay on time as well as pump up the 100-plus party diehards in attendance.

They offered up a cavalcade of red-meat Republican talking points and policy stances — and  a clear picture of the strategy that the McCain and his running mate Sarah Palin will employ from now until November.

First up, Carly Fiorina
Fiorina, a former Hewlett-Packard CEO, assured the business crowd that McCain is still in their corner. (And to that crowd, “business casual attire,” as the affair’s dress code was billed, apparently means dark blue suits and silk ties.)

“The economy is the number-one issue this campaign turns on,” Fiorina said. “As a business woman it’s critically important that we have a president who understands the economy.”

She quickly highlighted McCain’s “courage to do the right things,” and that the “American people will recognize his authenticity.” She hit the McCain “maverick” theme while ever-so-slightly distancing the senator from President Bush.

“People say this will be four more years of George Bush,” Fiorina said. “But that’s factually inaccurate. He’s disagreed vocally with the president.”

Then Fiorina turned to a subject that’s hasn’t been embraced by many Republicans in the past: global warming.

“Eight years ago John McCain believed in policies [regarding] climate change,” she said. For those disbelievers in the crowd, she laid out the business and economic sense of going green, adding, if in fact there’s no such thing, “what’s the harm” in doing something anyway?

The issue was one of McCain’s top “things you don’t want to hear” that he was telling voters in Iowa, although McCain emphasized the issue less after gas prices increased.

On the issue of climate change, Senjem said afterward: “Society recognizes that right or wrong, it’s a major issue and we have to compete for votes. Call it what you will but we have to get those independent voters.”

Late-night with Mitt Romney
Romney hit the podium with his wife, Ann, and two of his sons. The former Massachusetts governor started with a Minnesota-themed joke that’s making the rounds: The presidential race is too close to call and McCain and Obama agree to settle it with a four-day ice-fishing contest in Minnesota. On each of the two days, McCain catches 10 fish to Obama’s none.

“On the third day, Harry Reid tells him to go spying” on McCain. “Obama comes back and says, Harry, you won’t believe it, but he’s cutting a hole in the ice.”

After the laughter died down, Romney said the joke illustrates that “experience matters.”

“John McCain and Sarah Palin are both pretty straightforward,” Romney said, repeating a major framing device of the campaign. “Keep taxes down, clean coal, nuclear power, and, of course, off-shore drilling,” he said hurriedly, revealing some litany of policies.

Then he told another funny, this one about he and Ann being in Beijing for the Olympics, and attending a women’s beach volleyball game. He realized his photo was being taken by folks in the crowd, “even Chinese,” and how remarkable it was that his campaign had reached halfway around the world. Then he looked back, he said, “And saw Kobe Bryant sitting behind me.”

More on the economy, energy, Palin
Ridge, former Homeland Security chief, opened with a few wisecracks, praised Pawlenty and then focused on Palin.

“Governors do things, governors have to make decisions,” Ridge said. “On her first day in office she probably made more executive decisions than the Democrat nominee has made in his whole career.”

Then another push for dealing with climate change: “Do nuclear, do coal, do renewable,” Ridge said.

“How about that bold initiative in constructing a pipeline from Alaska down to the states here,” Ridge said of Palin. “How visionary.”

He talked of Palin’s recent “little flaps in life,” but said that the pick was “much to my surprise and delight.”

Hoekstra emphasized McCain’s foreign policy expertise while perhaps undermining his own. “I don’t care, I don’t want to learn it,” he said, in a display of willful ignorance, of pronouncing the names of foreign leaders such as Iranian President Mahmoud Ahmadinejad. “Say them quickly and friends will not challenge you.”

But despite the meeting’s focus on McCain, the Palin star is white-hot right now as delegates and the nation await her speech tonight.

How high has the Palin fervor hit in this convention?

Hoekstra concluded with this: “I’ve not met her, but I love her.”