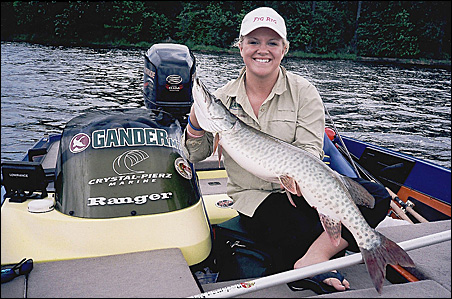 When Sarah Kay, 23, got the CNN e-mail update, she screamed. Her colleagues rushed into her office, concerned.

What had happened? Sen. McCain had chosen a moose-hunting dark horse as his VP.

Kay, who was raised by an avid angler and hunter in rural Rush City, quickly fired off a mass e-mail enumerating her admiration for Palin and asking friends to call her “Sarah Barracuda.”

“I feel like I can connect to her,” Kay says. “She has the same kind of background as I do. I know what it’s like to get up at 4 a.m. to go hunting with your dad.”

Kay is in good company here in the Land of 10,000 Lakes and 900,000 deer. A number of female outdoor enthusiasts have embraced the ice-fishing governor turned vice-presidential candidate. Glen Menze, who is running against incumbent Rep. Collin Peterson in the 7th District, scored hearty applause when he made that point in a speech to Minnesota’s delegation.

“Sarah’s a perfect fit for our district,” Menze said. “When people in our district see that picture of [Gov. Palin] holding that M-16, they’re going to yell, ‘Yeah!’ “

“Lucky Libby” is among them. The 20-year-old star muskie angler excitedly called her fishing partner, her dad, when she heard the Palin news Friday on Fox News.

“I definitely relate,” said Libby Hoene, a Bemidji State political science major. “Everything about her is something that I would do.” Right down to the outdoors-inspired nickname.

“I don’t think he could’ve chosen someone more up an outdoors woman’s alley than her,” she said.

Hoene verged on giddy when describing her respect for Palin. “She’s a member of the NRA, which I think is amazing,” she gushed.

Common ground
Being a hunter and angler reflects more than simply shared interests, Hoene said; it reflects shared values and a common lifestyle. Hunters tend to be conservative, she said. “Being a hunter, you have to believe in your right to bear arms.”

Simone Schara, 36, of Ramsey, daughter of Minnesota Bound’s Ron Schara, also appreciates Palin’s outdoor interests. “It appeals to me because I think when it comes to conservative issues that arise, she is going to lobby more,” said Schara, who hunts waterfowl and upland game with her black lab. “She’s a wonderful asset to McCain’s campaign.”

“I’m the type of girl who will rarely go out fishing without makeup on, and I always have my nails done before a fishing tournament,” Hoene said. “Everybody thinks I’m weird, but you never know when you’re going to catch that massive muskie that may be on the cover of a magazine.”

Palin proves that being outdoorsy and being feminine aren’t mutually exclusive, said Kay, who’s never let the gravel roads in her hometown keep her from wearing stilettos.  “She’s got her hair all nice, but she can still get down and dirty and kick some butt.”