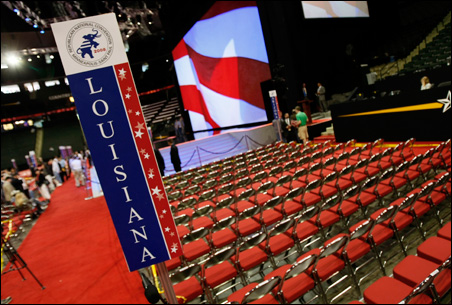 What if you threw a convention and nobody came? That’s been the feeling around town since Hurricane Gustav forced the GOP to scale back convention plans in St. Paul: The prez, the veep, the Ah-nold, the Katie and other television news stars can all be marked as no-shows, at least for day one.

Add to that the stiffing of Minnesota Gov. Tim Pawlenty on the McCain ticket, and local Republicans might be forgiven for crying in their coffee Monday morning. To be sure, the morning reception for the Minnesota delegation at the Hilton Garden Inn in downtown St. Paul was a muted affair, to say the least, but no one’s ready to concede to … Lamest Convention Ever. Not yet.

The featured speaker today was Asa Hutchinson, the former congressman, Drug Enforcement Agency head and Homeland Security undersecretary from Arkansas. He began by giving “a little flavor” of his home state’s political scene, which is full of “Democrat leadership” “across the state.”

In spite of this, Hutchinson promised, “Arkansas will go for Senator McCain,” which drew healthy applause from the roughly 100 delegates, alternates and local party geeks assembled in Town Square Ballroom A.

He continued that “John McCain understands there’s a lot at stake” in this campaign, citing terrorism and border security in particular. But the biggest reaction Hutchinson got was when he moved on to Sarah Palin, McCain’s exceedingly popular vice-presidential pick.

“We in Arkansas love the candidate we have in Sarah Palin,” Hutchinson gushed to applause that might have rivaled reactions from your typical Obama fan. “She’s not just a woman, but a woman with spunk.”

Of course, all this gushing was before news broke Monday that Palin’s 17-year-old daughter is pregnant. CNN and others reported that Bristol is five months pregnant and that Palin issued a statement saying her daughter would marry the father, identified only as Levi, of the child.

“Our beautiful daughter Bristol came to us with news that as parents we knew would make her grow up faster than we had ever planned,” Palin’s statement said. “As Bristol faces the responsibilities of adulthood, she knows that she has our unconditional love and support.”

Solemn about Gustav, ambivalent about George
Afterward, state GOP chairman Ron Carey went over the logistics of bus passes and floor credentials, noting that it’s the best seating the Minnies have ever had at a convention. Then that was the sum of the day’s business. What’s on the program at the Xcel? Not much of anything.

Outside the “ballroom,” delegates were careful to not complain about the large shadow the storm is casting over the affair in St. Paul.

“It’s an appropriate way to start a convention,” said Ron Schutz, a delegate from Medina, referring to the downsized first day. “I don’t think it would be good to be playing partisan politics, which is mostly what conventions are, at a time like this.”

Still, Schutz conceded, the whole thing’s kind of a bummer. “It’s disappointing,” he said, “but understandable.”

Former state Rep. Phil Krinkie, a delegate from Lino Lakes, took the temperature of his fellow delegates. “I’m not disappointed because I think things will be better by Wednesday and Thursday,” Krinkie said. “It’s a little more somber and sensitive, but given all the activity on the Gulf Coast, that’s a threat to life and property.”

But what about all the attention being elsewhere? “TV loves hurricanes,” he sighed.

President George W. Bush and Vice President Dick Cheney were scheduled to speak tonight at the Xcel, and they have a serious, legitimate reason to not appear at the convention. Yet their absence could be seen as a blessing, since Barak Obama has more recently tried to paint any McCain presidency as another four years of a very unpopular current administration.

Is there relief or disappointment that the not-so-dynamic duo won’t be here tonight?

“I think some people are disappointed because they were looking forward to meeting them,” Krinkie said, adding that he’s not one of them because he’s met Bush/Cheney before. “Maybe for a national television audience there’s some relief because of all the analogies that could be drawn to the Bush legacy.” But Krinkie, an optimist of sorts, compared Bush to Harry Truman, who was deemed a failure in the waning days of his presidency only to ascend again in hindsight.

Pat Anderson, the former state auditor and a delegate from Dellwood, said she prefers not to look back. “To some people it’s somewhat of a relief,” Anderson said of Bush’s absence. “Look, George Bush is our president. But the convention is not about the past. It’s about McCain and Palin. It’s about the rebirth and remaking of our party.”

Sorry, Guv: Palin as the GOP’s own messiah
Whether the GOP will transcend and transform itself in this election remains to be seen, but there’s certainly new life in the party with the addition of Sarah Palin on the ticket. Republicans are positively gaga for her. Of course, no one is sure how supporters will react now with news of her daughter’s pregnancy.

But some of the locals also feel bad for Tim Pawlenty.

“I’m not one of those political junkies who was guessing on the candidates,” Krinkie said. “But to have our own Governor Tim Pawlenty be the pick, just miles from where he grew up, and here in St. Paul, that would have been really exciting.”

But Krinkie smiled and said the Palin selection had generated interest in the ticket for Republicans nationwide. “She has a tremendous personal story,” he said, but then admitted that he only knew “tidbits” of it.

Anderson, who worked with Pawlenty during his first term at the Capitol, said she was disappointed for him, “but it’s good for Minnesota because it’s good for him to remain governor.”

But Anderson went on at length about Palin: About how she’s a reformer, about how she’s not entrenched in Washington, and about how she brings some of the fiscal and social conservatives back to the party and back into this race.

“We’ve had a problem with this party in the last 10 years, which happens with any party when it’s too much in control, and there was arrogance coming out of Washington, and the party lost its roots,” Anderson said. By her measure, Palin represents a return to some “old-style” conservatism.

Anderson, a mother of four children and two step-children, also said she admired Palin as a mom and a woman.

As for the knock on Palin not having any experience, Anderson somewhat dismissed the notion. “She’s inexperienced in national security, but she’s got experience in everything else,” said Anderson, a former mayor of Eagan. “She was mayor and on the city council. Look, I’ve done that too, and that’s the toughest job in politics.”

For all the Palin praising being bandied about, there has to be a fear that the ticket is suddenly about the new number two, and not that tired, old number one.

“I think right now, at this convention there’s so much excitement about Sarah, but as the campaign goes on it sort of wears off,” Anderson said. “People vote for the president, not the vice president.”

G.R. Anderson Jr. covers politics and the Capitol for MinnPost. He can be reached at granderson [at] minnpost [dot] com.

A muted affair for state delegation on day one