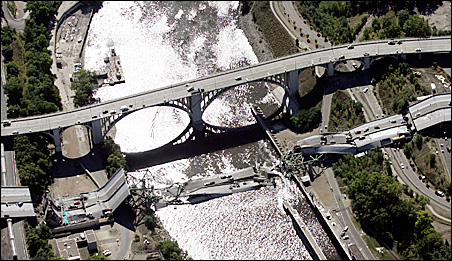 With memories still fresh from that terrible August evening 14 months ago, Minnesota’s top elected leaders gathered on the deck of a rebuilt Interstate Hwy. 35W bridge on Monday to remember the dead, reflect on the lessons learned, and announce that the gleaming new structure will be opened for traffic at 5 a.m. Thursday, three months ahead of schedule.

In addition, Minneapolis Mayor R.T. Rybak unveiled plans for a Remembrance Garden to be built at Gold Medal Park near the bridge’s south end. The garden will serve as a memorial for the victims, survivors, family members and others whose lives changed forever when the bridge collapsed without warning into the Mississippi River, killing 13 people and injuring 150 others.

The mood on Monday was bittersweet as an impressive lineup of speakers struggled to balance dreadful memories with the pride of accomplishment. The new bridge has risen in just 11 months, a remarkable feat of governmental cooperation, engineering skill and workers’ sweat. Described as both safe and smart, the new bridge will provide a template for other major bridge projects across the country and around the world, its builders said.

The concrete and steel structure will cost $234 million — all federal money. In addition, the builders — Flatiron and Manson construction companies — stand to earn tens of millions of dollars in bonuses for early completion. State Transportation Commissioner Tom Sorel would not confirm published reports that the bonuses will reach $27 million.

Gov. Tim Pawlenty said the bonuses for early completion should be weighed against the estimated $400,000 per day in lost efficiency that the collapsed bridge has cost the metro economy.

Uncommon harmony among officials
“It’s important that we reflect on the incredible teamwork that took place amongst the stakeholders that allowed this bridge to get built in such a fashion and such a time,” he said, naming the federal, state and local officials from both parties who worked in uncommon harmony to accomplish the task with remarkable speed.

To the ordinary motorist the newly named “I-35W St. Anthony Falls Bridge” won’t come across as a stylish landmark. There are no massive suspension cables overhead and, aside from the wavy 30-foot sculptures at each approach, no distinguishing decorative feature to set the bridge apart. 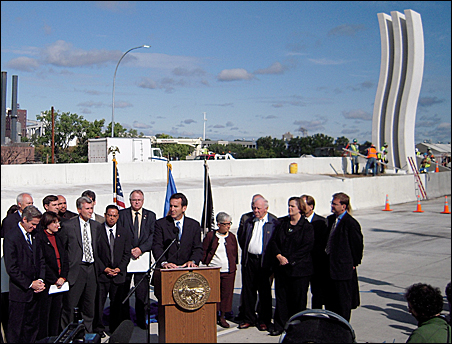 MinnPost photo by Dan Haugen
Gov. Tim Pawlenty, flanked by the Minnesota congressional delegation, Mayor R.T. Rybak and other dignitaries, speaks on the bridge at a press conference Monday.

It seems instead to fit the pragmatic Minnesota character. Its four spans, totaling 1,214 feet, are supported by 12 massive piers, each built to withstand extreme winds and temperatures. Its redundant design provides a real-time flow of traffic and safety data to monitors at MnDOT and the University of Minnesota. The bridge is strong enough to handle a future light-rail line as well as 10 lanes of traffic and four shoulders. And, with 49,000 cubic yards of concrete and 17 million pounds of steel, it’s built to last at least 100 years.

Troopers will escort first cars
To open the bridge for auto traffic early Thursday morning, state patrol cars will line up across the lanes as traffic gathers behind them. The troopers will move forward from each end, escorting the first cars across the new structure. Parkways beneath the bridge along both riverbanks will open at the same time, although bike trails will remain closed for a time.

State transportation officials expect the new bridge to alter traffic flows in the metro region. Traffic should diminish at river crossings on Hennepin, Central and 10th Avenues, and at Interstate Hwy. 94. Traffic on Hwy 280 and on University Avenue may lessen, although bottlenecks in downtown’s “Spaghetti Bowl” and at the Hwy. 36 junction in northeast Minneapolis may return. Before falling, the bridge had carried 140,000 vehicles each day, making it one of the metro’s busiest.

That only 13 people were killed and fewer than 100 cars went into the water was remarkable considering the scope of the tragedy. Construction had narrowed traffic to two lanes and cars were moving at relatively slow speeds as rush hour was ending. The extra weight of the construction project and a flaw in the bridge’s original design (gusset plates that were too thin) are considered the likely cause of the collapse, although the National Transportation Safety Board’s final conclusions won’t be known until November. 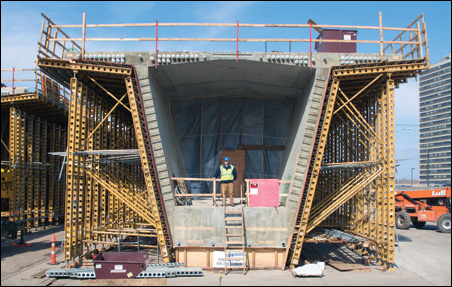 Courtesy of MnDOT
A pre-cast concrete segment of the new bridge.

“It shouldn’t take a tragedy to build a bridge this fast in America. But it has. And it would be a travesty if we didn’t share the secrets that this state, and this community brought together to make this project happen so quickly,” U.S. Transportation Secretary Mary Peters told the gathering on Monday. She praised the “sweat and passion” of “all of you in hard hats” and pledged to make sure that “lessons were learned and the right remedies taken to ensure that no one has to worry or wonder when they cross a bridge in America ever again.”

Tributes to communities’ and delegation’s work
All speakers praised the Twin Cities’ cooperative spirit. “We learned a year ago what happens when a bridge collapses and today I believe we’ve shown what happens when every arm of this community reaches across this river and builds connections that are far stronger than concrete or steel,” said Rybak.

U.S. Rep. Jim Oberstar, D-Minn., chairman of the House Committee on Transportation and Infrastructure, told the story of how Minnesota’s congressional delegation worked across party lines to push the replacement bridge forward with remarkable speed. The bridge fell on a Wednesday night; by Saturday both houses of Congress had passed a funding bill and President Bush had signed it.

The images of courage and heroism by ordinary Minnesotans moved the nation, Oberstar said, and inspired Congress to move with amazing speed. “We were not going to have a Katrina in Minnesota,” Oberstar said, thanking his colleagues from both parties.

‘A call to action’
Ellison’s tone was the most combative. “We must use this as a call to action,” he said, to rebuild the nation’s sagging infrastructure. Roads, bridges, transit systems and ports are short $1 trillion in needed repairs and expansions, he noted.

That shortfall is more critical given that the Federal Highway Trust Fund will go broke next year. Secretary Peters told reporters that one lesson to be learned from the collapse is that gasoline taxes alone can’t make up for the nation’s transportation shortfall. 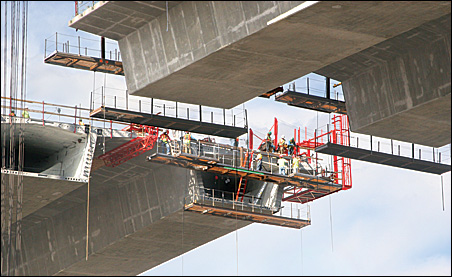 Courtesy of MnDOT
Workers prepare to install the last segment of the bridge.

Lt. Gov. Carol Molnau did not attend Monday’s event. The Senate removed her from her post as Pawlenty’s transportation commissioner last February, seven months after the bridge fell. Her absence yesterday was a reminder that the aftermath of the bridge tragedy had not gone quite as smoothly as advertised.

Indeed, the cooperative mood began to dissolve days after the bridge fell. The shock of the collapse had shattered Minnesotans’ confidence and heightened their indignity that such a thing could have happened in a place they consider a cut above. Klobuchar’s remark that “in America, a bridge just should not fall down” captured perfectly what Minnesotans felt.

Parties had different focus
Republicans preferred to paint the collapse as a tragic accident and to emphasize a replacement bridge. Democrats wanted to focus less on a new bridge than on why the old one fell down. They initially resisted the temptation to blame Pawlenty and his administration even though many believed that parsimony had played a part. And Pawlenty was conciliatory in saying that he might favor a gasoline-tax increase for road and bridge improvements, a big reversal for him.

When Pawlenty backed away, the two sides returned to their trenches. Oberstar said we’d “still be riding in ox carts” if the GOP had its way. Rybak came close to linking the no-tax ideology to lives lost on the bridge. “This was not an act of God, but a failure of man,” he told Congress. “A lack of investment can have serious consequences.”

As the search for clues gathered steam, Democrats didn’t like the answers offered by the National Transportation Safety Board. A number of preliminary reports named as the probable culprits a design flaw (thin gusset plates) and the extra weight of a cosmetic construction project as the probable cause.

But Democrats wondered why MnDOT inspections had not detected problems in the design. If the agency had considered the bridge structurally deficient, as its inspection reports indicated, why had the bridge not been scheduled for immediate repair or replacement? Legislative leaders commissioned an inquiry, led by the Minneapolis law firm Gray Plant Mooty, to determine whether MnDOT’s policies, practices or financial condition had contributed to the disaster http://www.gpmlaw.com/gpmwww/pdfs/InvestigativeReport.pdf and how the situation might be improved. When completed, the report said MnDOT’s cumbersome bureaucracy may have obscured the bridge’s problems and the agency’s lack of money may have “adversely influenced decision making.”

Gasoline tax hadn’t been raised since 1988
The money argument had been longstanding. MnDOT’s major financial building block — the gasoline tax — had not been raised since 1988. Raising the tax had become a political hot potato. But seven months after the bridge fell, the Legislature passed the largest transportation package in state history, including a gas-tax hike, over Pawlenty’s veto. The governor thus became the fallen bridge’s first political victim, although Molnau paid a bigger price. 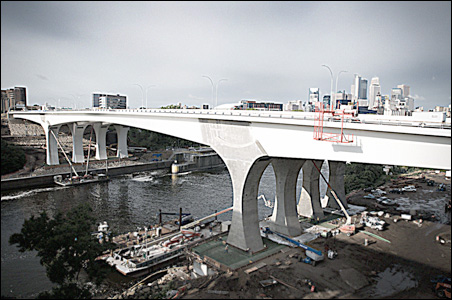 MinnPost photo by Raoul Benavides
The finished bridge, a few days before opening.

There were other disagreements along the way. MnDOT originally resisted Minneapolis’ insistence that the new bridge be capable of adding future light-rail trains. And MnDOT turned aside a proposal from the world’s most famous bridge architect, Santiago Calatrava, among several other bids. Its process and lack of clear explanation drew criticism from the local design community and angry lawsuits from losing bidders.

Tom Oslund, Gold Medal Park’s landscape architect, designed the memorial garden. Thirteen metal beams jut upward from a 65-foot-wide plaza with a large black granite fountain in the center. The striking design will cost $1 million, all in private money, a quarter of which will be used to start an ongoing fund to maintain the garden. The William and Nadine McGuire Foundation, Oslund and Associates, Thrivent Financial for Lutherans, Capella University, the Minneapolis Building and Constructions Trade Council and Flatiron Construction have made initial donations.