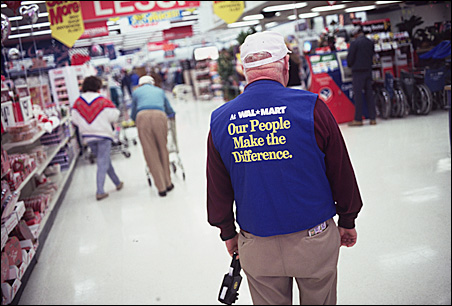 Unless I win the Powerball or my college-age son strikes it rich or I inherit gobs of money from a long lost relative or I remarry into money, this 50-something journalist expects to be writing, editing and maybe even greeting Target shoppers until I’m 80-something.

While interviewing folks in recent days about the financial meltdown in our economy, it’s becoming evident that some of us are going to be working longer than we thought and our notions of retirement are being redefined on the fly. You gotta wonder, and maybe laugh a little, about this headline from MSN Money the other day: “Retirement? Fuhgeddaboudit.”

Workers of all ages say they expect to retire later than they thought they would a decade ago, according to the 2008 Retirement Confidence Survey (PDF) published in June by the nonpartisan Employee Benefits Research Institute. Among age 55-plus workers surveyed this year, 38 percent thought they’d be retiring at age 66 or older compared with 12 percent in 1998. Ten years ago, 38 percent of this age group thought they’d retire between ages 60 and 64; now just 22 percent expect to leave the work force during those years.

One can’t help but wonder what workers will say in 2009 about their retirement plans.

Like many of my peers, I can’t bear to look at my 401(k) account. Make that my 201(k) account. When it comes time to collect my pension, I’m crossing my fingers that my former employer will be around to make good on its promises. I know I can’t just count on the hard-pressed federal Pension Benefits Guaranty Corp. to bail out my pension fund. And who knows how far Social Security will go after I turn 66?

Between dwindling retirement funds and rising costs for health care, gas, heating fuel and food, retirees and near-retirees like me are worried. Earlier this month, a MetLife poll titled “Feeling the Economic Pinch”  (PDF) asked Americans age 60-plus “which of the following aspects of the future keep you up at night?” Forty-seven percent said “running out of $.” In fairness, “America’s loss of prestige on world stage” was the answer of 35 percent of respondents. But 16 percent said “having enough $ to retire.”

The same poll from MetLife’s Mature Market Institute found that 87 percent of the respondents are “feeling a pinch” during the economic downturn and 21 percent of those already retired are now working or seeking jobs as a result.

Back to the grind?
While some experts are telling us to sit tight and don’t cash out of our funds in a panic, others are actively looking for ways to keep us working or putting us back to work.

Susan Tulashie, a program coordinator for the Minnesota Department of Employment and Economic Development, sees evidence of older people’s need to work when she visits one of the 47 workforce centers she oversees. The other day, for example, nearly all of the 17 computers at a Twin Cities center were occupied by people ages 60-plus looking for work.

“There’s a paradigm shift,” she says about retirement. “We always thought we would protect people who were retired, that it would be a time of comfort. And now it’s a time of worry.”

One U.S. Department of Labor-funded program, which works with nonprofits to upgrade the skills of impoverished and low-income people ages 55-plus, has had to turn people away because of cuts in funding. The program pays minimum wage for 20 hours of weekly work to the trainees with the goal that they eventually will be permanently placed in jobs. And more than half typically find jobs.

“I’m getting a lot of phone calls from people who don’t qualify for this program because it’s income-based,” said Taryn Galehdari, coordinator of DEED’s Senior Community Service Employment Program. “Their Social Security and savings aren’t enough (to make ends meet) with the higher prices and fuel costs. They’ve been out of the workforce for three to four years, and they can’t find work because of their age and there’s a lot of discrimination for the older population.”

Marvin Kjergaard is an employee training assistant with the nonprofit Experience Works in Sioux Falls, S.D., which receives state and federal money to help train older workers and land jobs. Kjergaard, now in his 70s, found a safety net there when he had to go back to work six years ago to cover the cost of his medications for diabetes and heart disease. After training through Experience Works, he now works part time encouraging employers to open their doors to the older population.

At the Minnesota Senior Federation, executive director Lee Johnson is preparing for the annual convention in October. One of the items on the agenda will be figuring out next year’s policy issues for the 12,000-member organization.

“Based on the last week or so,” said Johnson about the meltdown, “it’s pretty obvious that we’ll still be concerned about rising property taxes and the loss of equity in our homes … but I also think that we’ll actually be looking into seriously working with other partners about the need for seniors to work. There are many seniors that would have retired but now need to work for a number of reasons, but mainly for health-care reasons — the costs have skyrocketed.”

Seniors’ nest eggs are down anywhere from 25 percent to 50 percent, he says. “They were hoping to have a comfortable retirement and now they can’t afford that.”

Though the federation isn’t in the business of finding seniors work, the coming “age wave is quickly catching up with us and will overwhelm the services available,” Johnson says, adding there’s an estimated 1.3 million boomers in Minnesota. It’s not just the impact on Social Security and Medicare that’s of concern, but also in community services. “I think employers should look at building jobs with that in mind — it’s a wonderful opportunity for mentoring and instilling work ethic in younger employees by teaming with seniors.”

Health-care costs drive some back to workplace
Karin Patrick, manager of the federation’s health plan information center, says that even before the financial meltdown, she was hearing from seniors who felt forced to go back to work to pay for prescriptions. In one case, a woman took a part-time job in addition to a full-time job to pay for her husband’s prescriptions.

More so than in the past, Patrick says, seniors seem to be getting caught in the so-called “doughnut hole,” an in-between period in which Medicare Part D stops paying for prescriptions until another several-thousand-dollar deductible has been satisfied.

“It’s so bizarre — there’s really nothing like it (the doughnut hole) in the employee-benefit world,” Patrick says, adding “thank God.” Patrick now fears that the financial meltdown will distract Congress and others from fixing this glitch in Medicare Part D.

Health-care benefits are among the reasons some people are postponing retirement at Lunds and Byerly’s grocery stores or applying for jobs there later in life, said Rhonda Harman, senior director of human resources for Edina-based Lund Food Holdings Inc. Part-timers working a minimum of 16 hours a week are eligible for pro-rated, partial health-care benefits.

“I think that, in general, we may have seen more applications from older people over the last four or five years,” Harman says, adding that some just want to work there because they want to try something new or are passionate about food. “In my opinion, as baby boomers retire they may not want to completely retire. … Our sense is that they may have retired from a full-time position and they apply here because they’re interested in food and food products — they’re foodies by nature.”

She cites the case of a former lawyer who now works part time in the deli. She doubts he needs the money, but she knows he’s interested in food.

The desire vs. the need to continue working
Which brings us to those semi-retirees who don’t necessarily need the money but enjoy working and want to stay active and involved. I’m thinking of those edgy boomers targeted in the Ameriprise Financial commercials with Dennis Hopper, he of the “Easy Rider” biker era pitching retirement plans. They’re not ready to golf for the rest of their lives — ride their Harleys, maybe, but in-between doing good deeds like volunteering and contributing heavily to my employer, the nonprofit MinnPost.com.

3M Co. pensioner Mark Skeie retired on paper in his mid-50s, but hardly retired. He and his wife, Janet, are the editors and publishers of “Mapping Your Retirement” and are active in the Vital Aging Network, which builds leadership skills and encourages older people to help their communities and workplaces.

The longer they stay involved in something they find worthwhile, the longer and fruitful lives they will lead, Skeie believes. “It’s like you (he means me) saying you’ll probably die over your typewriter, (my computer, actually) that you will probably do this until your last breath. It’s very much what they want to do” because they enjoy it so much.

Fifteen years ago, he had visions of fishing, golfing and traveling in his retirement. These days, he’s busy giving lectures and chairing the Vital Aging Network — most of it volunteer work.

Still, Skeie acknowledges that his peers are increasingly worried about the meltdown and the proposed $700 billion bailout. Though he and his wife each have pensions and savings, he doesn’t want to go into what he calls the “fear mode” or to alarm his cohorts. “There’s just enough anxiety already, and we don’t want to add to it.”

So, where are these events taking us?

“I think history is in the midst of being written right in front of us, right as we speak. I think back to 9-11 and how the world changed around us and … how we saw so many things as the crisis unfolded. … You listen to (Treasury Secretary Henry) Paulson and (Fed Chairman Ben) Bernanke using words like ‘complete collapse of the financial structure,’ and your mind races to the 1930s. You read newspapers that use words that put the fear of God in the American public. I think that’s wrong.”

He urges calm in the face of anxiety. “I think we have to be extremely careful. My experience in life is not to overreact but to let it unfold and watch carefully.”

In the interim, Skeie sees a dramatic shift under way in how we view old age and retirement.

“There are two factors factoring into the equation,” he says. “Number one is the financial crisis. Number two, the underpinnings are starting to shift in how we view this time of life.”

As for me, well, I’m at my keyboard, still breathing and suddenly realizing I forgot to buy a lottery ticket.

Casey Selix is a news editor and writer for MinnPost. She can be reached at cselix [at] minnpost [dot] com.