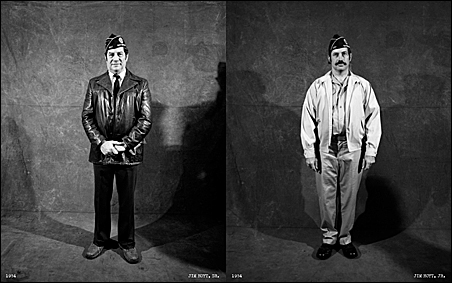 Photo by Peter Feldstein
Jim Hoyt Sr. and his son talk about their lives in “The Oxford Project.”

That changed when University of Iowa journalism professor Stephen Bloom asked Hoyt simply to tell him about his life. The war stories came tumbling out. Hoyt had seen human skin turned into a lampshade. Seen hearts removed from living people. Seen thousands of bodies piled high.

“Seeing these things,” he told Bloom in 2005, “it changes you. I was a kid. Des Moines was the furthest I’d ever been from home.”

The nature of Hoyt’s postwar work struck Bloom: “When you think about this guy carrying this secret with him, on his rounds, delivering letters — the secret he kept was sealed almost as tightly as the letters were sealed in the envelopes he delivered.”

Now they’re being opened. Hoyt’s life story. His wife’s. His son’s. His card partners’. His neighbors’. His buddies’. His relatives’. They’re all revealed in “The Oxford Project,” a spellbinding portrait of small-town life and the passage of time that hits bookstores today.

The project began in 1984, when Peter Feldstein set out to photograph every one of the 676 residents in his town, Oxford, Iowa, located about 300 miles south of the Twin Cities. It was a social experiment; he invited them to pose however they felt comfortable, snapping one picture of each person. By the summer’s end, Feldstein had photographed 670 folks.

Twenty one years passed, and Feldstein, a photography professor at the University of Iowa, decided to shoot a second round. That’s when Bloom entered the picture, equipped with a pad of paper and keen listening skills. “In many ways, I felt like a confessor,” he said. “I felt like a priest in a confession booth.”

Some interviews were brief. Others lasted for hours. After interviewing 100 residents, Bloom crafted their stories, “shrink-wrapping” the tales into brief biographical vignettes. They are presented alongside the old and new pictures of the people, delivering arrestingly intimate glimpses into American lives.

Piecing it together
The pictures and names function as a key to the town; you can track the silk strands that make up the intricate web of small-town life. The context is layered and rich. You see, for example, that the same woman was a “guiding light” to her son and a thorn in her daughter’s side.

The son embraced Oxford; the daughter loathed it.

“Whenever I come back home, a sadness comes over me,” she told Bloom. “I don’t belong and I never belonged. It’s too bad because I think I’m pretty cool, and I think I have a lot to offer.”

Robin Ellen Stoker is gay. In the past two decades, a lot has changed in her life; she moved away, had gastric bypass surgery and found a baby donor. But the spare tire she had as a teen hits the exact same spot on her body in the new picture, and the close-mouthed smile still hints at hardship.

The Oxford Project shows how lives have changed — and how they’ve remained the same. It reveals the risks Iowans took. Mary Ann Carter married the guy who missed their first date because he was in a car accident — and missed the second date because he tried to outrun a Highway Patrol car and got arrested. “Ted and I have been married 42 years,” her story ends. “I feel blessed.”

“We know so much about Angelina Jolie,” Bloom said. “But what this book seeks to do is to allow Americans, and really everyone, to understand who lives in this country and what their dreams and aspirations are, who they wanted to become and who they became. It’s as close to an American reality show as it gets. It’s really the opposite of all this manufactured Britney Spears, Paris Hilton feigned drama. This is as dramatic as it can be, when you look at these quiet stories.”