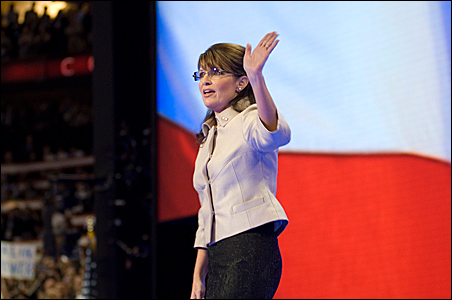 MinnPost photo by Bill Kelley
Gov. Palin’s speech on Wednesday was a clear hit with delegates.

When pundits declared months ago that a cease-fire in America’s culture war was within reach, they clearly hadn’t seen Alaska Gov. Sarah Palin coming to the vice presidential slot on the GOP’s ticket.

In the week since Sen. John McCain introduced Palin as his running mate, combat along the social divide has been so intense that it had cast its own narrative even before Palin’s big speech Wednesday night at the Republican National Convention in St. Paul.

Eager as the nation was to hear more from this surprising candidate, she already had been defined by both sides as battles flared anew over abortion, guns, sex education, feminism, teen pregnancy – and, above all, “the elite and liberal news media.”

It all seemed so ’90s. Those issues supposedly were losing fire. Social conservatives were frustrated with politics, we had heard. The left was learning to be more tolerant of faith-based political thinking.

Not a word about social values
In her speech, Palin made no mention of her staunch conservative values on social issues – not a word about saving unborn babies, erasing sex from education and keeping guns at the ready.

Instead, Palin focused on lauding Sen. John McCain who was nominated for president last night and is set to accept tonight. She also celebrated her family, small towns and hockey moms.

“You know, they say the difference between a hockey mom and a pit bull: lipstick,” she quipped to the delight of an energized GOP crowd.

“Before I became governor of the great state of Alaska, I was mayor of my hometown,” she said. “And since our opponents in this presidential election seem to look down on that experience, let me explain to them what the job involves. I guess a small-town mayor is sort of like a ‘community organizer,’ except that you have actual responsibilities.”

She was referring to Obama’s work as a community organizer in Chicago after he graduated from Harvard Law School.

In a rebuke to her critics, Palin also said, “I’ve learned quickly, these past few days, that if you’re not a member in good standing of the Washington elite, then some of the media consider a candidate unqualified for that reason alone.”

Creating a crisis mentality
Although Palin sidestepped social issues in her speech, one of her roles in the campaign is to light a fire under social conservatives who were lukewarm on McCain. Palin didn’t need to stoke them in her speech. They knew she was one of them, and they were ecstatic.

In the days leading up to Palin’s speech it had looked as though the choice of Palin had brought McCain more trouble than he had bargained for.

But what if the trouble was part of the bargain all along, part of a deliberate bid to throw Republican voters into a crisis mentality and a fighting spirit? New York University journalism professor Jay Rosen posed that fascinating question Wednesday on his PressThink blog.

“John McCain’s convention gambit is a culture war strategy,” Rosen wrote. “It depends for its execution on conflict with journalists.”

The basic strategy, Rosen said, “is don’t fight the crisis narrative. Rather, do things that bring it on; and in that crisis re-divide the electorate hoping to grab the bigger half.”

The strategy “bets big time on backlash,” Rosen said. At its center, he said, “is the flashpoint candidacy of Sarah Palin, a charismatic figure around whom the war can be fought to scale, as it were.”

Palin was an instant heroine of social conservatives, Jim Vandehei and David Paul Kuhn wrote on Politico.com and she helped reignite not only abortion but also other flash-point issues in a way few of McCain’s other vice presidential options would have done.

Until Palin took the spotlight, the whole discussion had been about national security and the economy, “and now we see the culture wars back with her appointment,” said Michael Cromartie, director of the evangelical studies program at the Ethics and Public Policy Center in Washington.

Culture wars, RIP
This is not the way the political script was written a year ago when Brink Lindsey, vice president for research at the Cato Institute wrote in the National Review that “the culture wars are over.”

After the blunders and betrayals of the late Republican Congress and the now-moribund Bush administration, American society has moved past the cultural convulsions that propelled the conservative movement to power, he said. “If that movement is once again to play a constructive role in shaping the country’s future — if it is to regain its lost vigor and clarity of purpose — it will need to redefine itself in light of where the country stands today.”

Then came Palin, or as signs said on the convention floor, “Palin power.”

On Tuesday, the convention’s true opening night, former Senator Fred Thompson and President Bush sounded a litany of us-versus-them rhetoric alternated with impassioned defense of Palin. It was a call to combat with a shared enemy. And conservatives nationwide responded.

“Sarah Palin’s pending nomination for Vice President is exposing the depth of the cultural divide between Middle America and the leftists who have taken over the education, media, and cultural establishment of our country,” Thomas Lifson wrote in The American Thinker.

‘A desperate race’
“A desperate race is underway, with the liberal media scampering to define Sarah Palin to the public as a dangerous religious fanatic and naïve hick, some kind of back woods primitive incapable of effectively discharging the awesome job of president, soon to be thrust upon her as John McCain expires right after his inauguration,” he wrote.

He predicted that ordinary Americans would join ranks with the Republicans and see Palin as akin to Marge Gunderson, the fictional chief of police of Brainerd in the Oscar-winning movie “Fargo.”

“The kind of woman who probably rides snowmobiles with her husband, for crying out loud,” he wrote. “Yet in the end, Marge Gunderson solved the murder despite the sneers of her betters in the Big City (Minneapolis), and won the hearts of movie audiences. Americans like their heroines full of common sense and spunk.”

In her speech, Palin played masterfully to that image. She introduced her family and said of her husband, Todd, “We met in high school, and two decades and five children later he’s still my guy.”

She said that “people in small towns do the hardest work in America.”

‘I didn’t need focus groups’
By way of biography, she said, “I had the privilege of living most of my life in a small town. I was just your average hockey mom, and signed up for the PTA because I wanted to make my kids’ public education better. When I ran for city council, I didn’t need focus groups and voter profiles because I knew those voters, and knew their families, too.”

Except for highlighting her track record on energy development in Alaska, Palin made little mention of substantive issues.

But he also said he was struck by what he didn’t hear: “there was not a word about the middle class or health care or how people are going to fill up their gas tanks or a single word about how we’re going to get our kids through college.”