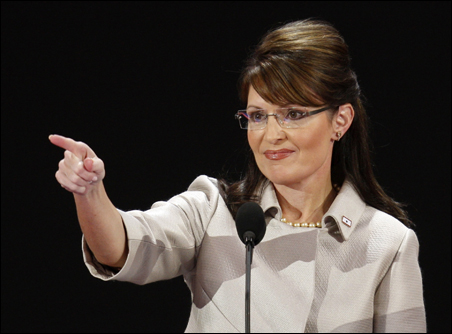 Delegates to the Republican National Convention had embraced Sarah Palin even before she got to the Xcel Center in St. Paul.

Now, they adore her.

All the energy that was missing in the first two nights of this convention? It was in full, screaming, laughing, dancing force on this night.

Then came the moment that Republicans have been waiting for six whole days. The moment Palin stepped to the podium.

Crowd roars for her — and one-liners
She wowed ’em. The crowd roared for her. For her husband. For her parents.

She filled the stage. And the Republicans filled the arena with cheers.

They loved this line: “They say the difference between a hockey mom and a pitbull? Lipstick.”

And this one, too: “I guess a small-town mayor is sort of like a community organizer, except that you have actual responsibilities.”

And they really loved this one: “What does he expect to accomplish after he’s done turning back the waters and healing the planet? The answer is to make government bigger.”

Inside the Xcel, she reached way beyond expectations.

But how did her speech play outside the arena?

One, Kris Sanda, a Republican, had hoped for the best when the speech began.  The other, Joan Growe, a DFLer, was simply curious.

In the end, both were impressed. Actually, more than impressed in Sanda’s case.

“It was stunning!” Sanda said. “I’ve waited 51 years for this. That’s how long I’ve been active in Republican politics. I’m not one of those Reagan Republicans — I was a Ford Republican. I’m pro-choice (Palin is not). But that was amazing. She had spunk, sparkle, sizzle.”

Sanda, who is a Tim Pawlenty appointee to the Met Council and had hoped he would be the choice, said that she was going to have a nightcap before bed.

“A Jack Daniels and water,” she said.

Growe impressed on two levels
Growe, Minnesota’s secretary of state for 24 years dating to 1972 and a losing U.S. Senate candidate (to Rudy Boschwitz) in 1984, is a classic Minnesota feminist. She viewed the speech on two levels.

“I thought it was a well-crafted speech, and she delivered it well,” said Growe. “She stayed away from the social issues. She took the sharpest pokes I’ve heard taken at Obama.”

“The image of a woman giving a good speech in that environment can be a powerful symbol,” Growe said.

“The thing is, she didn’t tell me a thing about her view of the future,” Growe said. “She didn’t say a word about health care and other issues that are often seen as ‘women’s issues.’ Things like jobs and family leave. She didn’t even mention any of the social issues.”

Both Sanda and Growe believe Hillary Clinton all but escorted Palin to the Xcel podium.

“I, frankly, thought Hillary was going to be the nominee (for president),” said Sanda, “and I do think it was her success that made them (McCain) think about a woman.”

Growe was a Clinton supporter. Losing the nomination fight to Obama was hard. But …

“The McCain people, I think wrongly, believe that a woman can capture the disenchanted Hillary voters. She did well. But I can’t imagine anyone who supported Hillary will be voting for the McCain-Palin ticket.”

Both Growe and Sanda find common ground in the belief that women in earlier generations of politics will make it easier for Palin in the coming weeks.

In the end, was Growe impressed?

Sanda had been impressed even before the speech.