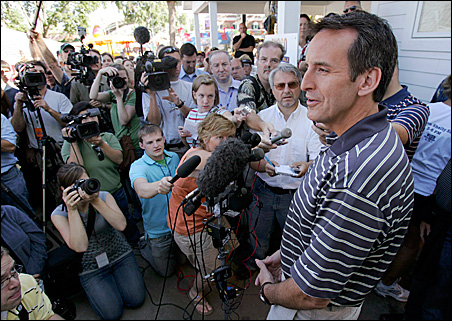 Despite Gov. Tim Pawlenty’s good public front, it is clear through his actions and conversations with people close to him, including staff, that he went to bed last Thursday fairly confident that he was the vice-presidential choice of Sen. John McCain. It’s also clear that despite putting on a good front, the governor and his staff are shaken by not being chosen.

After personally seeing Pawlenty Sunday morning, it was evident that it is not easy to handle everyone expressing their regret. Equate it to having to relive or recognize the death of a family member over and over. Pawlenty didn’t tear up, but the sense of loss was apparent. Despite that, he performed well on “Meet the Press” and “At Issue,” and showed he is ultimately a disciplined team player.

Losing the big game
Media and the chattering class noted Pawlenty’s absence from higher-profile RNC events — notably the media party Saturday evening on the riverfront in Minneapolis and the Minnesota delegation party Sunday evening at the James J. Hill House in St. Paul. These are two places that the governor of the host state would likely want to be.

However, considering that the emotions are raw, hanging out with media or attending a public party with all the movers and shakers in Minnesota, including the GOP delegates, would be about as comfortable as being the star athlete who didn’t get the ball to win the championship but is still expected to cheer the team on after being benched (in favor of a less experienced, lower-round draft choice).

Pawlenty’s staff made appearances at both events, but the disappointment and sense that they’d been within hours of being on the campaign trail were obvious in off-the-record conversations. Staffers shared their insights like athletes who replay the final plays of a big game over and over. This one was clearly a loss.

Now the GOP and Pawlenty’s team are watching closely to see if Alaska Gov. Sarah Palin can catch the “Hail Mary” pass that McCain has thrown to the end-zone with an all-or-nothing choice.

Pawlenty’s grace
Pawlenty, who is known for remarkable grace under pressure, has been tested on camera at every appearance starting Friday morning at the State Fair. It could be his Minnesota-bred fortitude that allows him to charge through. Pawlenty broke the story himself Friday morning in his regularly scheduled interview with WCCO Radio’s Eric Eskola at 6:20 a.m.

According to Pawlenty’s staff, they gave him the option of skipping that interview and the State Fair, but he wanted to move forward and get the entire story behind him. That hasn’t happened. And until the national press and GOP buzz leaves Minnesota, and Gov. Palin is fully vetted, questions about why Palin and not Pawlenty will circle.

By all accounts, Pawlenty may have been within hours of being McCain’s choice. Staff confirms a call on Thursday to the governor from the RNC and McCain’s campaign to clear the governor’s Thursday and Friday schedule. Staff was told not to read that as one way or another. However, members of Pawlenty’s team were told they should know before they went to bed Thursday night if Pawlenty was the pick. They didn’t find out until the early hours of Friday, when McCain called Pawlenty — sometime between midnight and 4 a.m.

There is even a rumor by one highly placed Pawlenty team member that there was a plane in Minnesota ready to take Pawlenty and family to Ohio. Now we know that didn’t happen, and Pawlenty goes the way of other VP contenders in Minnesota, and our sports-team jinx. The game that could have been.

Why didn’t Pawlenty get the job? It’s not clear, but at some point during last week’s Democratic convention in Denver, McCain and his advisers concluded that the Democrats were going to have an enormously successful gathering and it was time to begin thinking beyond the list of names getting publicly discussed as McCain’s running mate.

One point of agreement for most of Pawlenty’s team: The governor himself had a gut feeling for the final week that a woman would emerge as the pick. If true, Pawlenty is still his own best operative.

Finally, Sen. Norm Coleman’s tone has been one of clear support for Pawlenty as the pick. While that won’t cause a major fracture in the party, it does show that not all Minnesotans are saying that “it was just an honor to be considered” and that will be that — for Minnesotans, and probably for many within the GOP, are still trying to figure out the Palin pick, thinking that Pawlenty clearly would have been safer.