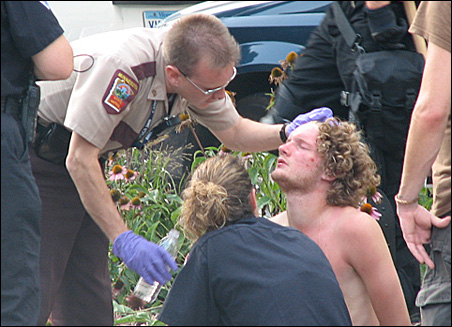 St. Paul police blamed six or seven roving groups of about 20 or 30 persons each for disrupting today’s generally peaceful anti-war protest that brought an estimated 10,000 marchers from the state Capitol to the Xcel Energy Center in downtown St. Paul.

The event, planned for the opening day of the Republican National Convention, was aimed at delegates, though few, if any, delegates were on hand to see them, particularly after today’s program was reduced because of concern for those threatened by Hurricane Gustav.

Some among the clusters of protesters who broke off from the main group are accused of breaking windows at Macy’s Department store and on at least two police cars, as well as slashing tires on a car and a bus. One police officer was overcome by the heat — magnified because of the riot gear hundreds wore; another was punched in the back. Several officers were hit by thrown rocks. None was seriously injured.

At a 5:30 p.m. police briefing, police reported that they’d arrested 56 people during the day, but even as they spoke another confrontation was under way at the new riverfront Upper Landing Park on Shepard Road, near Chestnut Street, where police had surrounded a group of 100 people, many protesters included.

Dozens were led away in handcuffs, and those remaining were told to sit and wait until they could be processed by police.

Most arrests are for misdemeanor charges
Of the 56 earlier arrests, seven were for felonies — assault or aggravated damage to property. Nine were gross misdemeanors, and the rest misdemeanors. It wasn’t immediately known what charges would be filed against those in the early-evening park confrontation.

About 6:15 p.m., Ramsey County authorities reported that the numbers had risen: 78 protesters had been arrested and processed. That includes 22 charged with gross misdemeanors, 38 with misdemeanors and 18 with felonies. That number was expected to grow after processing of additional protesters, and by late evening, the number had topped 200.

Police Chief John Harrington said the six or seven groups of lawbreaking protesters appeared to be coordinated, but not part of any one particular group.

The first arrest of the day came in midmorning, when an Iraq Veterans Against the War group marched downtown, hoping for a meeting with someone on Sen. John McCain’s staff to discuss their objections to the war. One man told police he was hoping to be arrested, and when he went off the route, he was, indeed, arrested for trespassing.

The first violent salvo, Harrington said, came about 11 a.m. on West Seventh Street, where a Dumpster was set on fire and pushed into an occupied police car. Five people were arrested there.

The main protest, between about noon and 3, went off about as expected, Harrington said, with a large police presence but no major problems. But shortly after the march got under way, the wildness began.

When rowdy protesters converged on St. Peter Street, near Sixth Street,  businesses that had outdoor tables or displays began to move them indoors; at Heimie’s Haberdashery, a passer-by tried to help lift a table, only to have the glass tabletop crash to the sidewalk and shatter. A block east, though, large pane glass windows at Macy’s were broken by protesters.

“I think you saw restrained use of force [by police]; they didn’t overreact, they didn’t break ranks.

Mayor Chris Coleman, too, applauded the police officers for maintaining order under difficult circumstances. “We maintained control of the city, thanks to an amazing police department,” Coleman said late Monday.

One group of protesters began dancing and prancing on the Wabasha Street bridge, causing problems for police because thousands were attending a Labor Day union picnic on Harriet Island, across the river from downtown, and the bridge was the quickest route for emergency vehicles to respond to any trouble there. So, at about 4 p.m., 100 National Guard troops took up position at Kellogg Boulevard and Wabasha Street to keep it from being occupied.

And another 100 riot-gear-clad police officers were stationed at the same time along Robert Street and Kellogg, in front of the Robert Street Bridge, as more protesters marched there; some garbage cans were dumped over and street barriers knocked down, and observers said tear gas was used when protesters confronted police.

It was a surreal scene on Kellogg between 3 and 5 p.m., with phalanxes of riot troops in full regalia stationed on the two corners while journalists and onlookers walked by, talking on cell phones and buying hot dogs and pop from vendors on the corners. 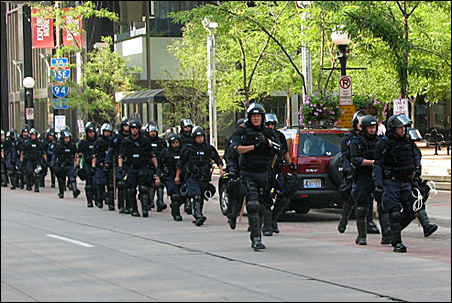 Meanwhile, on the river below, six boats plied the downtown side of the river as the Upper Landing Park confontation played out. Two Coast Guard boats, with machine guns fore and aft, mingled with the other boats. When a double-sized barge approached, heading down river, the Coast Guard boats shepherded the smaller craft out of the way.

Convention delegates, most of whom are staying at hotels in Minneapolis and the suburbs, were brought to the convention site about noon on charter buses that arrived from I-94, using the Fifth Street exit that has been closed to other traffic.

Picking up the delegates in the later afternoon, though, the buses paraded through downtown, coming west on Kellogg and then turning north on Wabasha. Despite the holiday, it created traffic gridlock in the area, trapping cars for long periods while the buses tried to maneuver through the busy streets.

Even though most downtown workers had the day off for Labor Day, it was a major headache  for those drivers who did venture into the area.

Harrington said the bus routes on the three remaining days of the convention will be varied, depending on traffic and other situations.

Joe Kimball reports on St. Paul City Hall, Ramsey County politic and other topics. He can be reached at jkimball [at] minnpost [dot] com.