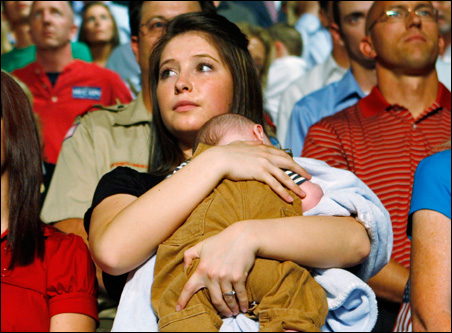 The news about the pregnancy spread pretty quickly, as one might imagine, at the GOP convention, where delegates were taking to the floor at the Xcel just as news was breaking.

Among the Minnesota delegation at a reception earlier Monday, vice-presidential nominee Sarah Palin had been spoken of as a near-savior of a potentially moribund campaign. Everyone loves Sarah.

Three men from the Minnesota GOP delegation shrugged the news off and, as only Republicans can, offered pretty much the same talking points. Calls to local female politicos on both sides of the aisle were not immediately returned.

Evangelical delegates attending the convention also urged a tolerant view on Monday, saying they were pleased the 17-year-old Bristol was choosing “life.”

“I think anybody can be sympathetic and empathize,” said delegate Brian Sullivan from the convention floor Monday afternoon, adding that support and enthusiasm for the ticket among delegates had wavered “not at all.” 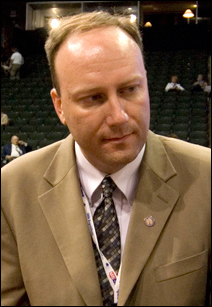 Indeed, the spin was that this just made the Alaska governor and mother of five all the more real, and not some plastic-perfect politician. “It humanizes her,” delegate and Minnesota House minority leader Marty Seifert said during a recess at the Xcel. “Republican families aren’t any different from any other families in America. Our daughters get pregnant. Some family members are gay. If anything, it makes Sarah more genuine.”

The humanity angle
“My thought is that it’s one additional level of humanity,” echoed delegate Phil Krinkie during the recess, displaying the GOP discipline for staying on message. “It’s an additional situation that many families have faced and many young women find themselves in.”

All three said the social conservatives and religious conservatives (folks Palin was supposed to bring around to the nonreligious McCain) among them at the Xcel hadn’t crowed much at all, and, in fact, that 17-year-old Bristol Palin was scoring points for not choosing abortion.

“She’s going to take this child to term and marry the father of this child,” Krinkie said.

“I’ve talked to a lot of social conservatives, and forgiveness is one of the more important attributes of faith,” Sullivan said.

The notion that this would somehow dissuade voters from McCain was pooh-poohed. “If someone thinks that social conservatives are now going to vote for Barack Obama,” Seifert said, “then I have some ocean-front property in Marshall, Minnesota, I’d like for them to see.”

But on the question of whether the religious right, who disdain McCain but swooned for Palin, will now stay home, Seifert was just as resolute: “Nope. Don’t see it happening.”

As for the matter of Palin saying she would support abstinence-only programs in schools when she was campaigning for governor of Alaska, Seifert wasn’t sure if that made her and the issue vulnerable in this campaign. “That’s tough to tell,” he sighed. “We might have to have that discussion sometime soon.”

The evangelicals weigh in
Warroad Community Church Pastor Gus Booth, a Republican delegate, said news of the governor’s daughter’s pregnancy is “certainly unfortunate. Nobody wants a pregnant teenager in the house. But at least she chose life.”

Booth said, “You can’t hold the governor responsible for all the sins of her children, but there certainly is a little bit of culpability there.

“Your children,” he said, “you want to raise them as godly as they can be. You know, I don’t know if it’s a failure on the governor’s part at all, but it’s certainly not good news. It’s not like she’s saying, ‘Praise God, my unwed teenage daughter is pregnant!’ “

Pastor Ed Boston of Hope, Ind., said, “It has nothing to do with the election. People ought to respect a 17-year-old’s privacy and not make a huge deal out of it.”

Boston said the news hasn’t changed his opinion of Palin.

Boston, a conservative blogger covering the convention for the Do the Right Thing website, says convention attendees he has spoken with after hearing the news all agreed the pregnancy is a non-issue.

His wife, Ann, said she would have felt the same tolerance toward Chelsea Clinton and her parents, former President Bill Clinton and Sen. Hillary Rodham Clinton, if she had become pregnant at that age.

“To me, it doesn’t matter if you’re a Democrat or a Republican or independent or a libertarian,” Ann Boston said. “It’s just a fact of life. People have sex. Teenagers have sex.”

The daughter and her boyfriend married after the birth of the baby, then divorced.

“The whole time our daughter was pregnant, I struggled really, really hard with it,” Ann Boston recalled. “I knew she was carrying a baby that she loved and that I loved my daughter and I loved this baby that was going to come, but I still had really, really weird feelings about it.

“But it all changed the moment that child got into my vision. And all those thoughts, fears and worries dissipated.”

Does Bristol’s pregnancy change her opinion of her mother?

“No, oh, no, not at all. I think she’s still the same person, regardless. And [Republican presidential candidate] John McCain knew this beforehand, and the fact that he still said this is a non-issue, I’m still putting my trust and faith in his wisdom. He said this is really a non-issue and let’s go through with this, anyway.”

Bill Smith, an evangelical Christian attending the convention as a blogger, said that when he was growing up in the 1950s and ’60s, it wasn’t unusual for teenagers to get married.

“In our day and age, many people were pressured to get married … but that’s not always the best way either.”

He said he, like Palin, prefers that teenagers be taught an abstinence-only approach by parents rather than public schoolteachers.

He said he favors allowing teens the access to birth control if they have parental approval.

The pregnancy: How big of an issue?