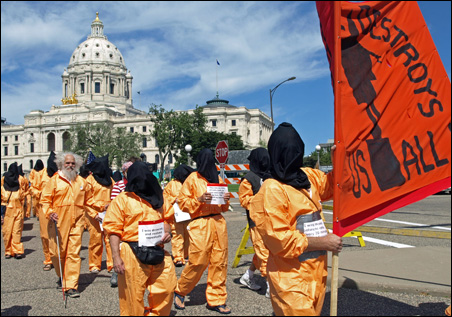 Why would people climb into full-body jumpsuits on the last hot day in August, pull black cloth bags over their heads and march more than a mile in the noon sun?

“What is going on at Guantanamo flies in the face of everything our form of government and the principles of the United States Constitution stand for,” Bob Kolstad, a lawyer from Minneapolis, said as he wrestled into his suit. “This is a visible symbol of how corrupt our government has become.”

The jumpsuits were orange, signifying the suits some detainees at the U.S. facility in Guantanamo Bay, Cuba, were forced to wear after they were captured more than six years ago. About 30 people donned them in front of the Minnesota State Capitol Sunday to march with a larger anti-war demonstration on the eve of the Republican National Convention.

Tim Tiernon, a former Air Force sergeant, said he came from Fort Wayne, Ind., to demonstrate because he believes the United States government is violating the rules of the Geneva Conventions in its treatment of the detainees at Guantanamo and others the United States has captured.

“It endangers our soldiers when we torture and violate international law,” Tiernon said.

Defining issues for McCain
Torture and the treatment of prisoners are defining issues for Sen. John McCain, the presidential candidate Republicans expect to endorse in St. Paul this week. The beatings and other abuse he suffered as a prisoner of war have given him a certain moral authority and personal stature that his Democratic rival, Barack Obama, lacks.

The story we will hear at the convention and in the campaign beyond it began in October 1967 when McCain was shot down during a bombing mission over North Vietnam. Badly injured, he was captured by the North Vietnamese as a prisoner of war and held from 1967 to 1973. In the now infamous “Hanoi Hilton,” McCain was denied necessary medical treatment, beaten repeatedly by the North Vietnamese and often held in solitary confinement, according to his campaign website.

“The first time I saw him, I thought he’d be dead by morning,” one of his cellmates, retired Air Force Colonel George Day, told Time. “He’d been beaten, bayoneted and starved.”

McCain, the son of an admiral, distinguished himself by refusing several offers of an early release because the military code of conduct requires all prisoners to be freed in order of capture. But he felt shamed because his captors brutalized him into a “sham confession,” Time said.

During the years after he was elected to Congress, McCain stood out for his strong opposition to torture.

Bush signed despite reservations
As recently as 2005, he pushed through a ban on torture of detainees. Congressional Quarterly reported that he earned such strong support that President Bush “was forced to sign it despite his reservations.”

In 2006, McCain worked with other senators to force the administration to accept language in the Military Commissions Act making it clearly illegal to impose cruel and inhuman treatment as the terms are defined by the Geneva Conventions. In other words, it would be a criminal act to inflict serious pain or suffering.

Bush’s congressional lobbyist at the time, Candida Wolff, told Congressional Quarterly, “He wasn’t giving ground just because the administration was calling. He had his principles, and it was clear that he was going to stick to them.” 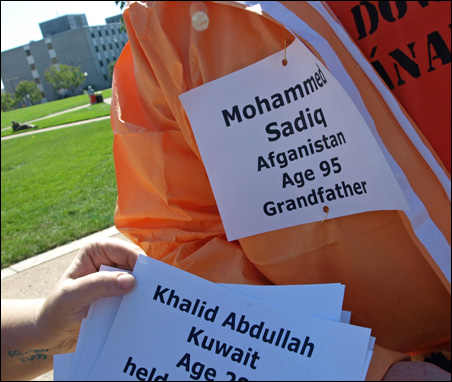 But demonstrators who marched behind a banner proclaiming “Torture Destroys Us All,” on Sunday were less impressed with McCain’s stance.

“It’s really strange,” said Lois Swenson of Minneapolis. “Given what he’s lived through, you would think he would be screaming his head off about what the United States has been doing.”

Let down by later statements
Andy Gricevich from Madison, Wis., was one of many demonstrators who said they felt let down by what they see as backtracking on McCain’s part.

“His initial statements that he cares about torture have been proven false by later statements,” Gricevich said. “Yet he uses his own war experience to gain politically. … It’s pretty disingenuous.”

This year, McCain voted against a bill that would have curtailed the Central Intelligence Agency’s use of waterboarding and other interrogation tactics that many say are torture. CIA officials had acknowledged that three 9/11 suspects in the agency’s custody had been waterboarded in 2002 and 2003. They also said the practice no longer is used.

The bill, which President Bush vetoed, would have required the CIA to abide by the rules set out in the Army Field Manual on Interrogation. The manual prohibits physical force.

McCain said in a statement explaining his vote that the bill would have gone too far by applying military standards to intelligence agencies, something he had opposed earlier. He said waterboarding already is illegal.

“I believe that our energies are better directed at ensuring that all techniques, whether used by the military or the CIA, are in full compliance with our international obligations and in accordance with our deepest values,” McCain said.

McCain accused of pandering
But, coming as the vote did during the primary campaign season, many Democrats and human-rights advocates accused McCain of pandering to Republicans as he sought to win their support for his presidential bid.

“It is shameful that George Bush and John McCain lack the courage to ban torture,” Democratic National Committee Chairman Howard Dean said in a statement. “And it is reprehensible that McCain changed his position on torture just to win an election. … The last thing we need is another president who will put politics over principle.”

The demonstration in St. Paul on Sunday was the first of several events scheduled during this convention week to challenge the government’s treatment of prisoners.

Amnesty International set up a life-sized replica of a Guantanamo Bay cell at West Seventh and Walnut Streets in St. Paul. Visitors who tour the cell can also record a video to President Bush and sign a petition calling for Guantanamo to be shut down. Other groups are displaying anti-torture banners and placards around Minneapolis and St. Paul.