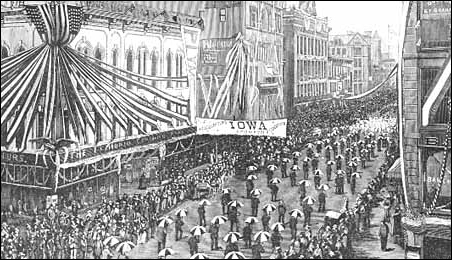 Courtesy of the Minnesota Historical Society
The arrival of the Republican National Convention delegates as they marched up Nicollet Avenue toward the West Hotel, Minneapolis, 1892.

“I can’t believe how well prepared we are,” declared St. Paul Mayor Chris Coleman in late August as his city prepared for its moment in the political sun.

More than 100 years ago, another local civic leader voiced the same sentiments as his city got ready for its chance to shine in the national spotlight.

“Things are in much better shape than I would have predicted three weeks ago,” announced George Brackett, just days before the start of another national political convention in Minnesota. Brackett was the chair of the local arrangements committee in 1892 when the Republicans brought their quadrennial nominating convention to Minnesota for the first time.

While 116 years separates this state’s two Republican conventions, there are remarkable similarities between the two events in terms of their local impact. Both political conclaves sparked huge outbursts of local boosterism and unleashed feverish speculation about the economic and political benefits that the conventions would bring to Minnesota.

Newspapers told of pride and benefits
When word reached here in November 1891 that the Republican National Committee had selected Minneapolis to host the next year’s National Convention, local journalists could hardly contain themselves.

“Minneapolis has secured the greatest honor that she has ever received,” enthused the Tribune. “Not only is it the greatest honor, but it will be of more material benefit than any other event held here. It means $2 million spent here.”

The St. Paul Dispatch, expressing family pride, declaring that St. Paul was “as fully jubilant” about the National Committee decision as its sibling city across the river. “Aside from political considerations, the convention will give both cities a great boom,” the Dispatch noted.

In 1891, a local arrangements committee, led by Sen. William Washburn and former Gov. John Pillsbury, spent six months organizing a highly sophisticated lobbying campaign aimed at snaring the 1892 convention for Minneapolis. One of their big selling points was the availability of the city’s mammoth Exposition Building, the Xcel Center of its time, as the convention site.

Adjectives of admiration
Three days before the start of the convention, a delegation of Republican leaders toured the building.

“Perfect, I tell you. I think that’s the word to describe it,” observed a member of the delegation from New York. “Even Madison Square Garden isn’t perfect in its appointments and so generally excellent in every particular as this hall.”

Minnesota’s 18 delegates were on the floor during opening night on June 7 as the convention’s temporary chair, J. Sloat Fassett, delivered the opening address. Referring to the Exposition Building, Sloat declared that it is “very appropriate that a Republican National Convention should be called together in a temple erected for and devoted to the exhibition of products of … American industries.”

“This city (Minneapolis), which just about equals the age of the Republican Party, presents on every street corner … superb object lessons of genuine Republicanism,” Fassett continued.  “The smoking chimneys of the factories, the busy hum of the work shops and mills, speak louder and teach clearer than any words of mine can do, the wisdom of the Republican doctrine.”

Governor didn’t speak, but Eustis did
Unlike this year’s convention, when Minnesota’s current governor will be a featured speaker, the state’s Republican governor at the time, William Merriam, did not address the 1892 convention. But another member of the Minnesota delegation, William Eustis, did have an opportunity to speak on the convention floor. Eustis was part of a rump group that wanted to dump the current Republican president, the lackluster Benjamin Harrison, and replace him with the more charismatic James G. Blaine, who had been Harrison’s secretary of state.

Eustis, who would be elected mayor of Minneapolis in 1892, told the convention that for more than 30 years Blaine had “toiled for the honor of the party and glory of the Republic.”

State’s favorite didn’t win
When the balloting for the presidential nomination got under way, the Minnesota delegation cast nine votes for Blaine, eight votes for Harrison and one vote for Gov. William McKinley of Ohio, who would become the Republican party’s presidential nominee in 1896.

Despite the vociferous support for Blaine from delegates like William Eustis, Benjamin Harrison easily won the nomination for a second term on the first ballot, winning 60 percent of the delegates’ votes.

Then, as now, Minnesota was considered a battleground state, and then, as now, holding the convention here was intended to generate electoral benefits for the Republic Party in November. In 1892, the Republican presidential ticket narrowly carried Minnesota, but lost the election. It remains to be seen whether history will repeat itself in 2008.

Republican spotlight on Minnesota — 116 years ago