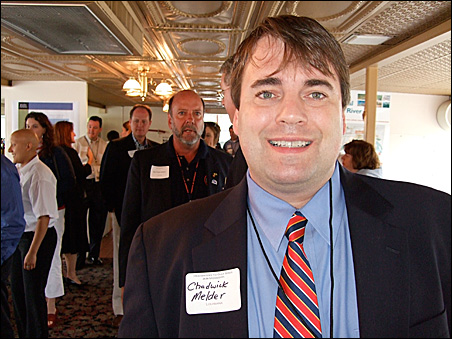 What happens when a couple of hundred Republican delegates trade the convention floor for a riverboat cruise in St. Paul? They put politics aside and get to thinking about something they often take for granted – the mighty Mississippi River.

These aren’t just any Republicans. The people lunching and soaking up the river’s sites during Thursday’s “nonpartisan Headwaters to Gulf on the Mississippi mixer” were part of an elite group. They came from the 10 states bordering the Mississippi. There were folks from Minnesota, Wisconsin, Iowa, Illinois, Missouri, Tennessee, Arkansas, Mississippi, and Louisiana (Kentucky missed the boat).

The St. Paul Riverfront Corp., a longtime advocate for river restoration and development projects, sponsored the event with funding from the McKnight Foundation.

Cruise offered opportunities for networking, showcasing efforts
“Hopefully, people will stay in touch with people they met from other river states,” said Patrick Seeb, executive director of the Riverfront Corp. “These kinds of relationships can lead to great partnerships in the future.”

And partnerships are key to the health of the Mississippi River, says Gretchen Bonfert, director of the McKnight Foundation’s Environment Program.

“The bottom line is, how the river is managed matters,” says Bonfert. “It matters a whole lot. And it matters from its whole length; from the Minnesota headwaters to the Gulf of Mexico.”

The McKnight Foundation has been funding projects to reduce farm-based pollution and encourage restoration of the river in the 10 bordering states since 1992.

Bonfert says the river still has a long way to go, but she’s encouraged by the questions she got from the Republican delegates, who can bring back some ideas to their home states.

The Mississippi, with its many nicknames – The Big Muddy,  Ol’ Man River and the Father of Waters – has always had an allure, starting from early explorers and traders telling tales of American Indian settlements and ancient mounds they can’t explain.

River historian John Anfinson calls the Mississippi an icon, and “a long adventure.”

But a smattering of interviews with boating delegates proved that depending on where one lives along the river, it apparently isn’t always the crown jewel of a town’s topography.

“Well, where I am, it’s all industrial,” says Steve Tomaszewski, an alternate delegate from southern Illinois.

And delegates from two Southern states (Tennessee and Louisiana), say river development is pretty much limited to casinos.

Often, the Mississippi is simply a conduit for trade, as in parts of Louisiana.

Thank you, Huey Long
Chadwick Melder, a delegate and Republican political consultant from Baton Rouge, La., has got a pretty good story about why his town’s three ports are always so busy.

“All the cargo and ships that come up the river must download onto barges when they reach Baton Rouge,” says Melder. “Because in 1931, Gov. Huey Long intentionally built a bridge low enough where ships could not pass the bridge without downloading and using our ports. It was a very conniving, and politically smart thing to do. To this day, we have a bridge too low for many ships, which is why the ports are used so much.” (Long was a Democrat, but Melder still has a twinkle in his eye when he tells the story.)

Between bites of food and conversation, delegates appeared to recognize something different about St. Paul’s riverfront, and genuinely seemed impressed with our fair city, where they got a personal handshake from Mayor Chris Coleman dockside.

As Nicky Baker of Clinton, Iowa, put it: “It’s just beautiful up here. I don’t know if pristine is the right word. But it’s close.”

By the end of the tour, it was pretty apparent Minnesota has got it good, comparatively speaking.

For the most part, the state’s riverfront is alternately wild and tastefully developed while still remaining a working river with busy St. Paul port operations.

It is also uniquely organized as the Mississippi National River and Recreation Area – the country’s only national park on and about the Mississippi River. That means it’s getting resources and attention that would be the envy of many a river state.