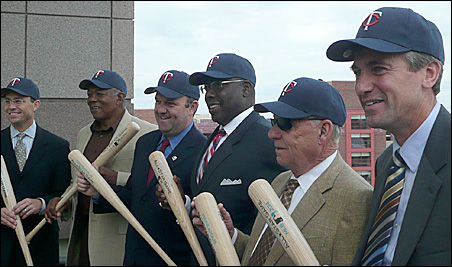 They stood behind microphones on the roof of Target Center this morning. The Mankato-stone-adorned Twins ballpark rose quite spectacularly below them. The announcement — as MinnPost reported Tuesday — was about a bid for the 2014 Major League Baseball All-Star Game.

But the real news came when Hennepin County Commissioner Mike Opat announced — and Mayor R.T. Rybak confirmed — that later this year the mayor will be asking City Council for $3 million in his 2009 budget to help fund “little projects” for pedestrian improvements and transit access around the ballpark.

Three million bucks is barely enough to pay a second-string shortstop these days, and it’s tiny, compared with the overall project cost of $517 million.

Still, it is a significant move because, if approved by the City Council, it would become the first city money invested in the long-debated and long-awaited ballpark.

The city funds would be used, Rybak said, to link the stadium more easily to pedestrians who live and work nearby and to those who use mass transit — such as light rail – to get to games. That’s been a long-term  goal of the mayor’s and the team.

For now, there are no specific plans for Rybak’s little projects.  He mentioned sidewalk improvements, as one example.

From Opat’s perspective, Rybak’s commitment is a long-awaited city contribution to a project that will generate lots of activity for that part of downtown.

“It’s a first for the city,” Opat said of the $3 million as he spoke to journalists and others gathered for the All-Star announcement. “We’ve been waiting for this at the county . . . We hope the City Council works quickly, swiftly and affirmatively . . . It’s a good first step, and we look for more. We’ll keep pressing you, Mayor.”

It’s the county that stuck its fiduciary neck out and, with the aid of the Legislature and Gov. Tim Pawlenty, instituted a 0.15 county-wide sales tax (3 cents on $20) to fund $350 million of the ballpark’s cost, with the Twins picking up the rest.

Rybak acknowledged that he “definitely expects that some questions will be raised” by council members about his $3 million proposal, but he said the goal was to help connect the ballpark with the rest of the neighborhood.

When Rybak attended the Democratic National Convention in Denver last month, he took a bike ride with Denver Mayor John Hickenlooper around Coors Field, the ballpark there. There has been development around that ballpark, Rybak said, because the structure was thoughtfully integrated into the surrounding neighborhood. That’s his hope for the Twins edifice.

The $3 million eventually will be generated — beginning in 2010 — by the 3 percent entertainment tax that will be imposed on Twins tickets sold in the new ballpark. It’s a tax that, with rising ticket prices, will grow over time. The first $3 million infrastructure investment would be prepaid out of city property tax revenues, according to Rybak spokesman Jeremy Hanson.

But the city’s general fund will be reimbursed once the ballpark opens and the entertainment tax begins to flow.

In future years, the mayor wants to use that Twins-triggered entertainment tax money for public safety and traffic control around the ballpark.

“It’s money that wouldn’t be generated if the ballpark wasn’t here,” Rybak said.

But it’s money that, like all pro sports-linked tax dollars in Minneapolis, is sure to be widely discussed come budget time.