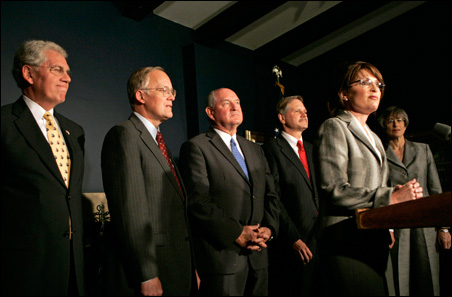 At midday Wednesday, Sarah Palin, the Republican vice-presidential candidate, was the wronged woman, bruised by the sexist media, Democrats and bloggers.

But just a few hours later, she had morphed into the strong, gutsy, fearless “I Am Woman” character of the Helen Reddy anthem. And a pit bull with lipstick, at least among the party faithful.

Some would argue the scene setting for Palin’s speech started at Wednesday’s press briefing in St. Paul, designed perhaps to elicit sympathy. Not a bad thing heading into a major, introductory speech for the Alaska governor.

Five Republican women, all luminaries in their party, spoke out in anger and in Palin’s defense at the briefing. As former Massachusetts Gov. Jane Swift put it:  “Republicans will not stand by while the governor is subjected to sexist remarks. As women, all of us are sensitized and outraged when we see sexism like this,” she said, calling it an “outrageous smear campaign.”

Regardless, Palin apparently scored a winning goal with her speech before the National Republican Convention, portraying herself as both “just your average hockey mom” and a reformer “going to Washington to serve the good of the people of this great country.” The early reaction: Today, she’s buried in accolades.

Markowitz, 37, says she was a little nervous about Palin’s speech, not knowing how well she would do. But she “more than exceeded my expectations,” she enthused, describing the VP candidate as “strong, intelligent, honest, willing to fight for what she believes in and not afraid of the establishment.”

Reaction to speech sprouted in moments in blogosphere
Minutes after the Palin speech, reactions started sprouting in the blogosphere.

Palin was “poised, intelligent, eloquent and right on the money on every topic,” said Ed Gruberman on a website featuring the American flag and Uncle Sam.

“Isn’t she utterly AMAZING!? You think the attack dogs will take a break? I they they’re SCARED WITLESS and it can only get uglier, but I’m going to try not to get too down about it,” wrote Z.

That “average hockey mom” phrase hit a chord. Google it and commentaries pile up like broken hockey sticks at a hard-fought match.

Blogger Alan Wilensky says: “Attaching her to the R ticket was the shrewdest political move in the history of American politics. She is the everypersons surrogate. Issues of experience, succession, etc., will not move the demographic that is enthralled with her. If she only responds in the debates with, ‘duh duh deeee beeep,’ they will still love her, and she will still appear charming. Brilliant.”

Palin seems well on her way to becoming an American folk heroine: “Here’s a little news flash…” as Sarah would say… . after days of enduring the media and bloggers hammer Sarah Palin, it was great to hear her ROAR!!!” That comment is posted on an Iowa blog, founded by a “born and raised Iowa farm girl,” a “conservative man” and other “committed conservative Iowa bloggers whose goal it is to protect traditional values,” according to the site. The poster calls Palin “tough and tender, caring and firm.”

Rudolph Guiliani, the former New York City mayor and presidential candidate, underscored the sexism charge last night in introducing Palin when he said:  “How dare they question whether Sara Palin has enough time to be with her children and be vice president? When did they ever ask a man that? When?”

(There was an opposite Republican view voiced Wednesday, as well. In an interview with Fox, Meg Whitman, McCain’s national campaign co-chair and former CEO of E-Bay, said she didn’t think Palin was the object of sexist treatment.)

Karlyn Kohrs Campbell doesn’t think so. She’s a professor of communications studies at the University of Minnesota who’s made it her life’s work to study language, politics and gender, starting with the historic women’s convention in Seneca Falls, N.Y., in 1848 through the present day.

“I haven’t seen anything yet that seems deliberately sexist, except, of course, the focus on family material. The problem here is that in some way, they’re (women) expected to credential themselves via family,” Campbell said. In other words, for a woman, having children or being married is rather expected as the American way.

“Women are damned if they do, damned if they don’t. They’re expected to fulfill traditional roles as wives and mothers, but when people talk about that, this seems demeaning” and sometime off-limits, as with Palin, the professor said. People talk about her having a 17-year-old pregnant and unmarried daughter and how she went back to work three days after giving birth to a child with Down syndrome. “There’s something unfair about that, and yet it’s part of our political culture,” Campbell said.

She said Palin’s speech was “very well done, a good job of introducing herself and her family,” as well as offering “meat and substance” to her experience as governor and “suggesting” some foreign expertise in regard to oil issues.

Like those of other major party candidates over the years, Palin’s family came onstage after her speech, gathering around in a family-portrait kind of way.

Palin’s talk of her family touched Margaret Flower, state president of the Minnesota Federation of Republican Women, 450 members strong across the state. “Her life is just like yours and mine with her family,” said Flower, who lives in Hastings. She praised the vice-presidential candidate for “putting her family first by running and trying to make a better life for her children and grandchildren.”

“It’s a tricky business about what’s fair, what’s unfair — whether there are special demands on women,” Campbell said. She feels Hillary Rodham Clinton, however, was often treated in a way “very disparaging to women.”

But the family is an issue for many women, she said. Many candidates and politicians fill their political biographies with family members, among them House Speaker Nancy Pelosi, U.S. Sen. Elizabeth Dole and Democratic candidates Barack Obama and Joe Biden. Pelosi pulled her grandchildren in for a photo op when she assumed the role of speaker to look more motherly, to “make a powerful position (for a woman) seem more acceptable,” Campbell said.

Dole, with no biological children of her own, naturally included husband Bob Dole’s daughter in her political biography, the professor said.

And both Obama and Biden talk about the importance of their children in their lives.

She said she suspects the outraged Republicans are using sexism as a tactic to “disparage the kind of data that people have dug up about Sarah Palin” and that they’re “trying to protect her from the media.”

Is Sarah Palin the victim of sexist media, Democrats and bloggers?