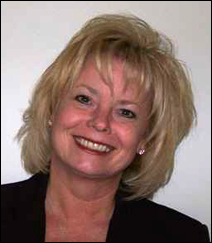 Lynn Wilhelm was pumping her arms as if her hockey-playing sons had just scored a game-winning goal. But she wasn’t sitting in a god-awful cold Michigan arena on a dark December night.

Wilhelm was in the cozy confines of her suburban Detroit home Wednesday night watching the Republican National Convention on TV.

She was celebrating the sanctification of the “Hockey Mom” as played out on the nation’s political stage — albeit at Xcel Energy Center, a hockey building — by Alaska Gov. Sarah Palin, John McCain’s running mate.

“You know the difference between a hockey mom and a pitbull?” Palin now famously asked. “Lipstick.”

Wilhelm, 49, founder of AskHockeyMom.com, a still developing website, was thrilled.

“Hey, we’ve been waiting for that type of recognition,” Wilhelm told MinnPost this morning from her Detroit office. “It’s always been, ‘Soccer mom, soccer mom,’ so now we have a hockey mom, and we are ecstatic.”

So, what exactly is a hockey mom, and why is this the demographic slice du jour?

What is a ‘hockey mom’?
A hockey mom is active and overly busy. Take Wilhelm, who is the chief development officer for a homeless service organization. She’s also the tournament director for the Rochester (Mich.) Rattlers, chauffeuring and administering her two stepsons’ daily and far-flung puck schedule.

The hockey mom is politically skillful.

Sort of like a mayor, governor or — perhaps? — a community organizer?

Lynn Olson, of Minneapolis, has been there and keeps doing that. She’s Minnesota’s top girls’ and women’s hockey representative to USA Hockey, the sport’s national governing body. She’s the mother of two grown daughters. She knows the politics of hockey momdom.

“You have your board of directors made up of parents who want something for their faction, their team, their child,” Olson said. “And they’re fighting against another division or age group or boys against girls. That is a problem in youth sports. It does get very political.”

Good skates?
And the hockey mom is aggressive.

“We’re not meaner, we’re just very competitive,” said Wilhelm. “When you’re freezing in a rink, you have to really get your thoughts out. We’re really tough. Hockey moms express ourselves quite loudly.”

And, as the kids — boys and now girls — check more and push more and fight more …

Well, as noisy as soccer moms can get, the hockey mom seems to be more forceful.

Because of the general shortage of ice rinks in most parts of the country, hockey moms are up earlier and driving later than soccer moms, whose timing might be a bit more normal. Youth hockey teams seem to practice more often than youth soccer teams; three rink practices a week are common, plus off-ice training, Wilhelm said.

Olson had a soccer- and hockey-playing daughter. She acknowledged that, as a mother, she was probably more outspoken at the rink than on the bucolic grass field.

“I think it’s because of the contact [in youth hockey],” she said. “You want it to be a fair situation. You don’t want somebody checking from behind. Bigger kids against smaller kids. I had a 5-foot-2 daughter. The sport is a lot more physical at that level and you react.”

There is an extremely foul-mouthed web video classic. Watch it at your ears’ peril, and see an extreme example of the hockey-mom mentality gone wild.

First came ‘soccer moms’
The politicizing of the “soccer mom” has been traced to 1996. Then, Jacob Weisberg of Slate wrote a thoughtful piece dismissing the idea that this suburban subset could influence that year’s election.

Before the instant emergence this week of the “hockey mom” cluster, there were also the “NASCAR dads” of the 2004 election, the sort of post-“Angry White Men,” who were, perhaps, a sort of hybrid greaser/Reagan Democrats.

To wit, Obama is a pickup basketball player of increasing repute.

As this same New York Times article points out, Bill Clinton was known for his golfing, as, of course, was Dwight Eisenhower. The Kennedys were touch-football proponents. Richard Nixon used football lingo and analogies during the Vietnam War years. Gerald Ford played football at Michigan. George H.W. Bush was a Yale baseball player, and George Bush the Current scored big-time by pocketing public subsidies for a new stadium when he was an owner of the Texas Rangers baseball team.

Wilhelm, a Republican, was planning to vote for McCain already, but thinks Palin will have an impact.

“Being a hockey mom, I can relate to her,” she said. “She can really be relatable to the women who are out there trying to juggle a million things, whether you’re a hockey mom or a football mom or a soccer mom.”

Let’s be clear: the “Hockey Mom” is not a recently discovered subset.

There’s been a publication in the Twin Cities called Hockey Moms for the past seven years. Started by Jim Penningroth and his late wife, Julie, it caters to the mothers who sit in the stands while their sons and daughters skate. It’s distributed free to about 10,000 readers 10 times a year at Twin Cities ice rinks. It doesn’t yet have a website.

“Dads have traditionally gotten a lot of the credit for the things that are done by their kids in sports,” Jim Penningroth, of Woodbury, said. “We thought it was important to trumpet the efforts and accomplishments of the moms, too.”

There’s even a song, “Hockey Mom,” by a Connecticut-based group called The Zambonis, that you can get at iTunes.

It’s got a good beat and you can punch to it.

Political impact: By the numbers
But here’s the real politically scientific piece to all this Hockey Mom hubbub: Hockey is a drop in the bucket when it comes to other sports. Even if Palin got every hockey mom’s vote, it wouldn’t amount to much.

The Most recent USA Hockey data show that there are 457,000 registered players in the nation, with another 82,000 coaches and officials. Taking a wider look, the Sporting Goods Manufacturers Association, which authoritatively tracks overall participation, says about 1.8 million people (age 6 and older) play hockey every year.

Of those 2 million — and we’re talking about someone who skated and shot a puck a couple of times over the past year — the sport is predominantly Caucasian and, of course, extremely Northern in its geography. Among hockey, soccer and basketball, those who participate in hockey have the highest household income of $80,540. It’s a more affluent sport and, perhaps, more Republican, although Minnesota hockey has a blue-collar strain to it.

Let’s put it this way: There ain’t too many hockey moms in Florida.

But you don’t need a calculator to ponder these stats from SGMA or the National Federation of State High School Associations, which tracks high-school sports participation.

At the high-school level nationally, there are 1 million boys and girls playing basketball, 730,000 playing soccer and a mere 45,000 playing ice hockey.

Last time we checked, basketball players had mothers, too.