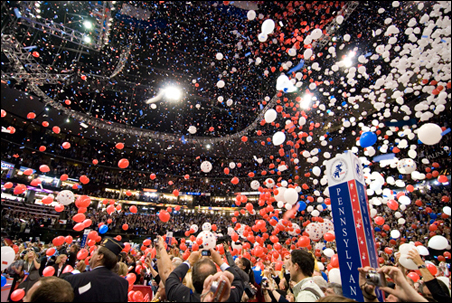 MinnPost photo by Bill Kelley
Republican delegates celebrated in grand style Thursday night, and Twin Cities officials seem just as happy with the results they got for hosting the gathering.

Let’s get the bad news out of the way.

1. Denver has the Rocky Mountains for a backdrop. Denver 1, Twin Cities 0.

2. Denver has a complete light rail system. This would have been a spectacular time to have the University Avenue light rail line in place, but decades of political shortsightedness  means the line won’t be completed until at least 2014. Denver 2, Twin Cities 0.

3. Denver has the 16th Street Mall through the heart of a single downtown, as opposed to the Twin Cities having no single thoroughfare. That meant that on any given day during the DNC, you could stand on the mall and feel the excitement of the political convention. The mall was packed with delegates, political and media celebrities, businesspeople, prophets, hawkers, protesters, anarchists. There was no single point where that happened in the Twin Cities. Denver 3, Twin Cities 0.

4. Denver was host to one of the most remarkable political moments of our time. The sight of 80,000 people peacefully streaming from all directions to Mile High Stadium to see Barack Obama accept his party’s nomination for president will end up in history books.  Denver 4, Twin Cities 0.

So, is it a blowout?

Not so fast. It’s our turn to bat.

1. St. Paul has the Xcel Energy Center, right at the edge of its downtown. The tax-despising Republicans loved this publicly financed place, which was far more accessible than Denver’s Pepsi Center, which is in the midst of acres of parking lots and more than a mile from the heart of downtown.

Some delegates attending the convention in Denver would hike a couple of miles to the Pepsi Center from downtown in hot August weather. There’d be an hour-long wait in the security line. (There was only one main security entrance to the Pepsi Center, compared with three entrances to Xcel.)  When people, sweating profusely, finally got into the secure zone in Denver, they were greeted by a group of cheering volunteers.

It was similar to finishing a marathon.

No need for that in St. Paul. Access was relatively painless.  Denver 4, Twins Cities 1.

2. The Xcel Center is tied to the RiverCentre complex and the old Roy Wilkins auditorium. Those facilities were turned into massive, air-conditioned media centers, complete with restrooms.

You don’t care about the comfort of the media? Remember, it’s the media that tell the stories of the convention and its hosts. Happy reporters tend to tell happier stories.

Despite the Gustav-shortened GOP convention, the media attention given the Twin Cities was huge, according to Host Committee officials. They said today that the convention has resulted in “8 billion media impressions.” That’s 8 billion.

For the last six months, the Host Committee had a clippings service that showed all of the stories being written about the Twins Cities as the RNC host.

“You know, those top 10 places to go in the Twin Cities list in the New York Times or USA Today,” said Teresa McFarland, communications director for the Host Committee.

Then, you multiply that story by the number of people who likely read it.

It was only in the last two weeks that Host Committee started compiling similar data from television programming.

At a news conference today, the Host Committee had 17, three-ring binders, each about 3 inches thick, with clippings from various sources about the Twin Cities and the convention.

“Priceless,” said Jeff Larson, CEO of the Host Committee. “The coverage we’ve received so far is the equivalent of purchasing 122 Super Bowl ads.”

The coverage still will be heavy through the weekend.

Let’s assume, because reporters had indoor facilities here, they were in a pretty complimentary mood — except for those reporters who got arrested covering riots.

At the Pepsi Center, the media was housed in massive tents erected on the parking lots. The tents were air-conditioned, but there was no running water and only satellite toilets. Denver 4, Twins Cities 2.

3. The attitude of the cops: A surprise plus to the Twin Cities here. Despite the fact that Twin Cities area cops were involved in some nasty altercations — and despite the fact there are scores of allegations of  abuse of power — cops here were, on the whole, friendlier than cops in Denver, who had only a handful of  lawbreakers to deal with.

Local media were jam-packed with photos and stories of the confrontations between police and those intent on grabbing the attention away from peaceful protesters. It appears, though, that those images did not get big play in the national media.

“I was walking with (his mayoral aide) Jeremy Hanson in Denver,” said Minneapolis Mayor R.T. Rybak. “He said the Denver media was paying more attention to the lawbreakers than the national media was, and he predicted the same thing would happen here. I didn’t believe him, but he was right.”

Rybak noted that in Denver, the police rode around on running boards of SUVs. It was an intimidating sight.

In the Twin Cities, police rented mini-vans instead of purchasing the SUVs.

“At a critical moment Wednesday night,” Rybak said, “we had to move 100 officers from one point to another. They took off in a caravan of mini-vans. It looked like they were headed off to a soccer tournament. The tone was different.” Denver 4, Twin Cities 3.

(Most of the Republican delegates, by the way, seemed highly appreciative of the work of the police. They didn’t mind any extra thumping being done by police, which is understandable given they were the potential targets of buckets of urine. )

4. The variety of places to go in the Twin Cities. Most delegates I spoke with seemed to enjoy the fact that they could attend the convention in one city and dine in another. Denver 4, Twin Cities 4.

Nah. We can be homers for a day. We win on intangibles.

St. Paul Mayor Chris Coleman said his most memorable moments during the convention came while on a paddleboat ride with 320 delegates and other visitors on the Mississippi. The unsolicited comments he was getting were dazzling.