Remember the big-bucks scotch at the St. Paul Grill? The high-end eatery and bar inside the St. Paul Hotel (PDF) cornered the local market in 55-year-old Macallan scotch last winter, buying the only four bottles made available in this region of the United States.

Folks there figured, with the Republican National Convention on the way, it would go down like Kool-Aid.

But at $525 an ounce, it would be quite the extravagance. And a windfall for the Grill. (It comes in a fancy 750-millileter Lalique crystal decanter that holds the equivalent of about 25 ounces. The bottle alone is valued at $750.) Selling a bottle ounce by ounce would create a $13,125 payoff. No word from the Grill on what they paid for the bottles.

By the time the convention arrived last week, the Grill had sold one of the four bottles outright, for $12,000, to a local heavyweight. Another full bottle had been sold off, ounce by ounce. And about half of the third bottle was sold, too.

So how many shots were sold during the RNC last week? 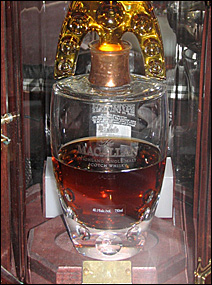 According to bartenders, one was sold during lunch to “a normal rich guy.” The other sold late at night, and they didn’t think a senator or celebrity downed that one, either.

Daytime bartender Theresa Peyer said the first two days of the convention were relatively quiet, but the final days were quite busy in the bar.

Although the Macallan 55 sat there, many others did partake of many of the bar’s 78 other varieties of single-malt Scotch. Most cost less than $100 per shot. The cheapest is $9.25.

Meanwhile, the half-empty (or half-full, for you optimists) bottle sits in a locked wood-and-glass case, complete with back lighting, in the middle of the back bar, waiting for the next big events in downtown St. Paul: Wild hockey games.