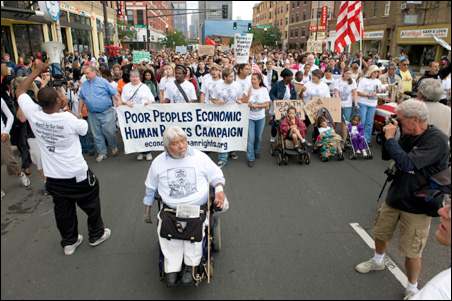 When several hundred people gathered Tuesday in St. Paul’s Mears Park to march to the Republican National Convention under the banner of the Poor People’s Economic Human Rights Campaign, few of them had any idea that they were about to set out on an odyssey through St. Paul’s concrete wilderness, but, led by the police, that’s what they did, in an exercise that varied from the absurd to the painful.

Protesters began gathering in the Lowertown park around 4 p.m., but there was no electrical power for microphones. Speakers tried to use bullhorns, but were generally inaudible in the carnival atmosphere that included Indian drummers and dancers, a brass band, chanting protesters and several street-theater groups. After an hour or so, a parks service worker, called by police, arrived to turn on the power.

As the speakers finally became audible to the crowd, one segment of the crowd broke away and started running toward the southeast corner of the park. The speaker began shouting to “keep the focus up here,” but the breakaway group surged into the street, where they were corralled by police in riot gear, and by mounted police.

The confrontation lasted a half hour, with scrimmages between news photographers and protesters — Minnesota Public Radio photographer Bill Alkofer got shoved around a bit, and a TV cameraman was repeatedly banged against a van — while the crowd chanted at police: “This is the face of democracy” and “This is what a police state looks like.” There were a few arrests, including one woman who was chased down by the mounted police, and one man apparently had a seizure and was taken away in an ambulance. 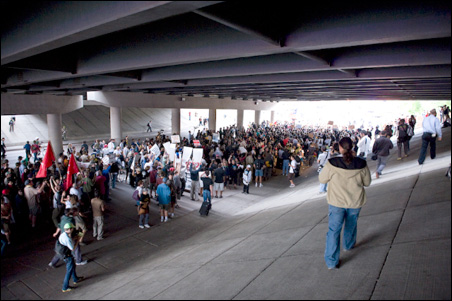 Around 6 o’clock, the march to the Xcel Energy Center began, and the street confrontation ended.

“Where in the hell are we going?” one of the marchers yelled at a police officer, who shrugged.

A barefoot woman said, “This is crazy,” turned around and left the march. Other stragglers began falling out and the march crossed the I-94/35E overpass to Lafayette Boulevard. From there, police led the parade even farther north, through the barren streets of an industrial and governmental backwater with no spectators anywhere — without even a possibility of a spectator — and past the Ramsey Law Enforcement Center.

By then, dozens of people began dropping out and walking away as it became apparent that the march was going to be extraordinarily long; organizers stopped the march twice to rest, as the police led the way up a series of hills, to University Avenue, behind Regions Hospital, then more hills and finally around a corner on Martin Luther King Boulevard to the grounds of the state Capitol building.

A television photographer, lugging a large video camera, said, “They’re [the police] trying to walk them to death so they’ll be too tired to cause trouble.”

Tired and foot-sore
At the Capitol, the march was joined by a crowd that was breaking up after a concert on the Capitol’s lawn.

Many of the Poor Peoples marchers collapsed on the lawn, tired and foot-sore, but the rest, joined by the concert-goers, surged down Cedar Street into downtown St. Paul, where phalanxes of riot-armored police funneled them into the large cage separating the demonstration area from Xcel center. 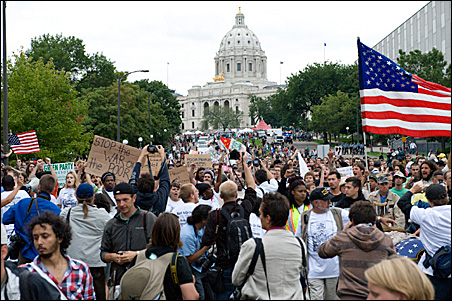 To cover the straight line distance of 11 blocks, from Mears to the Xcel, the police had led the parade some 2 1/2 miles, over two hours; the original crowd of Poor Peoples marchers had diminished by a third before it merged with the concert audience.

At the Xcel, the marchers peered through the bars of the metal cages at the Xcel, where a large video screen was running a history of the Republican Party; and after a few minutes, began to disperse.