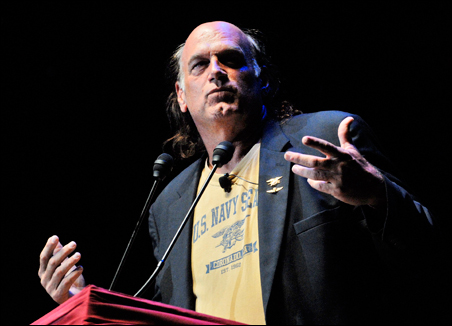 MinnPost photo by Daniel Corrigan
Jesse Ventura at Ron Paul rally: “Chanting and yelling isn’t going to do it. I need action.”

The political rally underway at the Target Center in Minneapolis today might be Ron Paul’s alternate convention, but the show belongs to Jesse Ventura.

Taking the stage after a dozen far-right speakers, including anti-tax activist Grover Norquist and the president of the John Birch Society, Ventura said he’d consider a return to political life if the estimated 10,000 cheering, chanting Paul supporters in attendance laid the groundwork.

“Over the next two to three years, if I see this country rise up, if this country shows me it’s worth it for me to do it, well, then maybe in 2012,” Ventura said. “Chanting and yelling isn’t going to do it. I need action.”

The audience, many of whom were dressed in Revolutionary War garb and other patriotic costumes, responded by pounding the bleachers and chanting “Jes-se, Jes-se.”

Fight back
“We have to start fighting back,” Ventura said. “It’s that simple. And the way you start fighting back is by coming to conventions like this and voting your conscience. When you’ve done that, don’t ever let a Democrat or a Republican tell you you’ve wasted your vote. The fact is, if you don’t vote your heart and your conscience, you have wasted your vote.”

While his main message was to exhort Paul’s supporters to break the two-party system’s deadlock on U.S. politics, Ventura also talked about gun ownership, civil liberties and unanswered questions about 9/11. “The hell with this Patriot Act,” he said. “If you want to be patriotic, then stand up for the Bill of Rights. Because once they’ve stripped those rights, it’s going to be hell to get them back.”

The crowd’s most enthusiastic response came when Ventura said the Founding Fathers were in fact concerned about oppressive government when they drafted the Constitution’s second amendment. “It’s time to take our country back and make those elected people look at that piece of paper called the Constitution,” he said.

When 10-term Texas congressman Paul withdrew from the presidential race in June, he announced plans for the day-long event to serve as the inaugural event in a Campaign for Liberty. The goal of the campaign is to equip Paul’s supports, who include libertarians, constitutionalists, John Birchers and countless other small but zealous conservative movements. They may have been locked out of the Republican National Convention underway across the river this year, but a grassroots effort to win local offices and influence state party apparatuses could change that, organizers said.

Paul wanted Ventura to speak at the event, the Rally for the Republic, because the former Minnesota governor is seen by Paul supporters in other parts of the country as someone who broke the Democrats’ and Republicans’ stranglehold on electoral politics, organizers said.

But the idea of Ventura as the movement’s heir apparent is a divisive one. Paul’s Minnesota followers privately concede they were disappointed Paul wanted Ventura to have a starring role. Specifically, they say Ventura is not a libertarian per se, but a maverick who often takes libertarian positions but sometimes acts in favor of big government.

Irritated with questions
For his part, Ventura seemed to be in his element. He mentioned numerous times that the only reason he had “come out of retirement” from his new home in Baja California was to make sure Paul’s Campaign for Liberty got off to a good start.

Before the rally got underway, he emerged from behind a cordoned off area to talk with reporters, only to quickly grow irritated with questions. After declaring himself “the most dangerous man in America,” Ventura excused himself to leave the Target Center floor, complaining that it would be more appropriate for the media to conduct interviews in a press room backstage.

Following his speech, Ventura made his way to the back of the arena to appear on camera with Fox News. After assuring his interviewer that Paul’s movement “could be the start of a third party,” Ventura refused to be pinned down about just what it is the newly minted activists would have to do to lure him back into electoral politics.