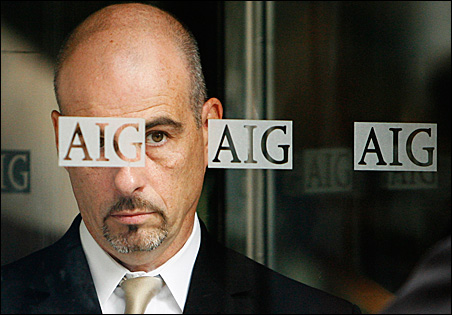 REUTERS/Lucas Jackson
A man walks through a door Wednesday at an American Insurance Group building in New York, a day after the Federal Reserve’s $85 billion rescue of AIG.

Several days into what is now recognized as a global financial crisis, the world’s central banks have joined together in a massive effort to stabilize money markets as further ripples from Wall Street become apparent. Meanwhile, the free-market Bush administration’s dramatic intervention to bolster American International Group (AIG) has the rest of the world marveling at a U.S. “free market detour” and a “paradigm shift.”

“The US Federal Reserve announced it was making available $180bn in extra funding to be pumped into overnight and longer-term money markets. In a joint statement, the European Central Bank, the Bank of Japan, the Bank of England, the Bank of Canada and Swiss National Bank pledged they would ‘continue to work closely together and will take appropriate steps to address the ongoing pressures.’

“Their action followed the dramatic escalation of financial market tensions following the collapse of Lehman Brothers, the rescue of the AIG insurer and the continuing crisis on Wall Street. By Wednesday, lending between banks in Europe and in the US had in effect halted. … The news had an immediate impact on Asian equity markets. In Hong Kong, the Hang Seng rose as much as 0.4 per cent higher after earlier falling as much as 7.7 per cent on the back of Wednesday’s sharp sell-off on Wall Street. But after a volatile session the index ended slightly lower for the day at its lowest level since October. In Europe, stocks also responded positively.”

Free market vs. intervention
Europeans are also responding to the irony of recent U.S. government actions. Writing from Paris, the New York Times‘ Nelson Schwartz asks the question on their minds: “Is the United States no longer the global beacon of unfettered, free-market capitalism?”

Partially answering his own question, Schwartz notes that, “In extending a last-minute $85 billion lifeline to American International Group, the troubled insurer, Washington has not only turned away from decades of rhetoric about the virtues of the free market and the dangers of government intervention, but it has also probably undercut future American efforts to promote such policies abroad.”

He reports that in France, “where the government has long supported the creation of ‘national champions’ and worked actively to protect select companies from the threat of foreign takeover, politicians were quick to point out the paradox of what is essentially the nationalization of the largest American insurance company.

“For the ‘evangelists of the market, this is a painful lesson,’ he added.”

‘A patient in intensive care’
As Carayon referred to the pain of America’s lesson, the Wall Street Journal‘s Jon Hilsenrath, Serena Ng and Damian Paletta employed a medical analogy to convey the dynamics of today’s financial turmoil: “The U.S. financial system resembles a patient in intensive care. The body is trying to fight off a disease that is spreading, and as it does so, the body convulses, settles for a time and then convulses again,” they write.

“The illness seems to be overwhelming the self-healing tendencies of markets. The doctors in charge are resorting to ever-more invasive treatment, and are now experimenting with remedies that have never before been applied. Fed Chairman [Ben] Bernanke and Treasury Secretary Henry Paulson, walking into a hastily arranged meeting with congressional leaders Tuesday night to brief them on the government’s unprecedented rescue of AIG, looked like exhausted surgeons delivering grim news to the family.

“Fed and Treasury officials have identified the disease. It’s called deleveraging, or the unwinding of debt. During the credit boom, financial institutions and American households took on too much debt. Between 2002 and 2006, household borrowing grew at an average annual rate of 11%, far outpacing overall economic growth. Borrowing by financial institutions grew by a 10% annualized rate. Now many of those borrowers can’t pay back the loans, a problem that is exacerbated by the collapse in housing prices. They need to reduce their dependence on borrowed money, a painful and drawn-out process that can choke off credit and economic growth.”

The broader U.S. economy
The WSJ reporters note, too, that the broader economy has so far “held mostly steady.” In part it’s because the government has reacted aggressively, they write, and in part it’s “because exports have been so strong at just the right moment, a reminder of the global economy’s importance to the U.S. And in part, it’s because the U.S. economy is demonstrating impressive resilience, as information technology allows executives to react more quickly to emerging problems and – to the discomfort of workers – companies are quicker to adjust wages, hiring and work hours when the economy softens.”

But, they add, “the risk remains that Wall Street’s woes will spread to Main Street, as credit tightens for consumers and business. Already, U.S. auto makers have been forced to tighten the terms on their leasing programs, or abandon writing leases themselves altogether, because of problems in their finance units. Goldman Sachs economists’ optimistic scenario is a couple years of mild recession or painfully slow economy growth.”

Susan Albright is a managing editor of MinnPost.com. She writes about national and international affairs. She can be reached at salbright [at] minnpost [dot] com.

What to make of the ‘free market detour’