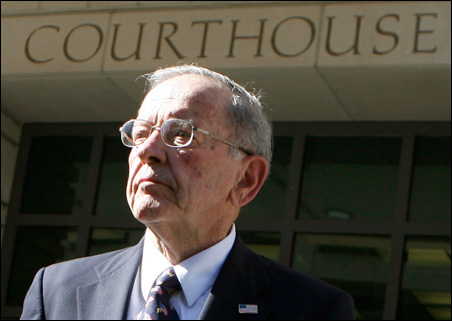 Sen. Ted Stevens’ conviction Monday on felony charges that he made false financial statements about gifts he received in exchange for political patronage raises this question: Do Senate rules require the Republican from Alaska to step down?

No, but precedent suggests he is unlikely to keep his office.

There is no rule saying that a convicted felon must be expelled from the Senate, says Howard Gantman, staff director for the Senate Rules and Administration Committee. But the Senate Ethics Committee can choose to recommend that the senator be expelled. A two-thirds vote is then needed from the entire Senate to expel him.

The Ethics Committee could also decide to wait for the outcome of Stevens’ appeal. But the last time a senator was convicted of a felony — almost 30 years ago — the committee didn’t wait.

Harrison Williams, a Democratic senator from New Jersey, was convicted in May 1981 of charges related to the FBI’s investigation of a bribery scandal known as ABSCAM. In August of the same year, the Ethics Committee recommended his expulsion. Williams stayed in office through the beginning of 1982, until the Senate began to debate the issue. He found few defenders on the Senate floor, and resigned before his colleagues had a chance to act. Williams was later sentenced to three years in prison.

Stevens is the fifth senator convicted of a felony in the history of the Senate. None of the others were expelled. Truman Newberry was convicted in 1920 of election fraud, but his conviction was overturned. Joseph Burton of Kansas resigned after a bribery conviction in 1906, and John Hipple Mitchell, busted for bribery in 1905, died before the Senate could expel him. Fifteen senators have been expelled in the history of the Senate – 14 for supporting the Confederacy during the Civil War.

In any case, the Stevens is up for re-election in just eight days, meaning voters will likely get a chance to expel him before the Senate even considers the matter.

Kristin Jones reports for ProPublica, an independent and non-profit newsroom.