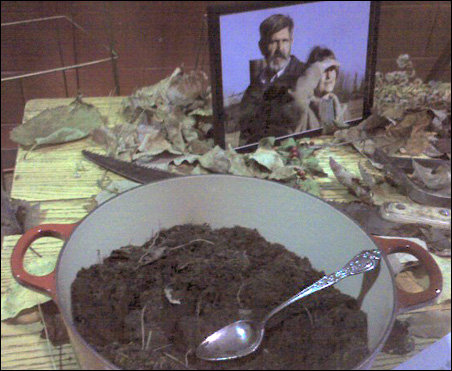 MinnPost photo by Joel Kramer
Gene’s grandchildren gathered dirt and autumn leaves from a trail he built on the family property in Kerrick, and visitors Thursday were invited to take some home.

The population of Bruno, Minn., is barely 100. But about 1,000 people, from local residents to state legislators and a congressman, stood in line at the old elementary school Thursday to hug former state Sen. Becky Lourey after the unexpected death last weekend of her husband, Gene.

Gene, known to his family and friends as Dal, was as shy as Becky is gregarious. But they were twins in their passion for social justice.  You can read about his life in this compelling obituary in the Duluth News-Tribune.

Laurie and I became friends with Gene and Becky in 2002, when Becky asked me to be her running mate in her unsuccessful effort to win the DFL nomination for governor. They have been strong supporters of MinnPost, and Becky serves on our Greater Minnesota Advisory Group.

Gene was not only the husband of a state senator, but the father of one: his son Tony succeeded Becky in the state Legislature. Tony’s wife, Marlana Benzie-Lourey, publishes a small weekly newspaper, the Askov American, where she wrote a personal remembrance of her father-in-law, which you will find below.

Joel Kramer is editor and CEO of MinnPost.com. He can be reached at jkramer [at] minnpost [dot] com.

From the Publisher
Marlana Benzie-Lourey

I was standing at the kitchen sink, a towering pile of dishes before me, my hands soaked and the end nowhere in sight. My kids were just toddlers, tumbling and bumbling around the kitchen at my feet.

“Grandpa Dal!” Stuart blurted, speeding toward our unexpected guest. My husband Tony’s father, Gene, stepped cautiously into the kitchen as his grandsons ran to his feet, calling out his nickname, Dal, a shortened version of his middle name, Dallas.

Dal looked down and chuckled, offering a quick tease that sent the boys running and giggling, only to come back begging for more.

“Ah, yeah, hey,” Dal said, nodding my way, in his characteristic, roundabout fashion. “Yeah, I was just driving by and, you know, you said you were thinking about raising goats, and, well, I have these books.”

Under his arm was a stack of books, magazines, and flyers. From the top he pulled a green, clothbound copy of the 1903 “Angora Goat Raising and Milch Goats,” tapping the cover with his finger.

“You know, you really ought to look at this,” he said seriously. Information was being lost, he told me, as he went over the stack of material on rare breeds. Did I know that big agriculture had thrown sustainability and environmental conservation in the ditch, he asked, as he pointed out flyers with “how to” advice on everything from manure management to cheese making.

Dal had started out quietly, almost timid, but now he was on a roll. He branched off into new ideas he had for fencing and told me how he’d been trying to figure out a way to feed nuisance flies to chickens. But he didn’t like chickens. Someone else would have to raise them.

By now, he was downright loud. People need to learn to live off the land and can’t reply on Big Ag, he said. Local jobs could be created right here. Your children can learn to be a new breed of farmer. He got louder and talked faster. The information poured out of him like a fount that had been let wide open. My sons stood still, transfixed. Colton’s eyes looked serious. Stu was in awe.

“Yeah, well, anyway, here are some books,” he said, tapering off to a mumble as he turned to the door. “I was just driving by.”

Eventually, I brought home two goats better at testing the integrity of fence lines than anything else. I tried feeding Asian lady beetles to my chickens, but they wouldn’t eat them. Dal laughed when I reported back to him.

Over the years, Dal would bring me information on rare and unusual breeds of beef cattle, greenhouses, methane production, raising pigs, growing apples, harvesting timber. Always, the conversation would start slowly, as if there was nothing new to say, but then the ideas would come.

The dreams he had seemed impossible, or, at best, impractical, but each time he could convince me that there must be a better way to harness the earth’s bounty in a manner that would keep us from relying on the petroleum monster that was certain to lead us to war.

He’d think of a way, he was sure, to one day make it all work, his reading glasses balanced on the end of his nose as he wrote target production numbers with a finely sharpened pencil on a yellow legal pad. A mathematician by trade, Dal charted his aspirations for his farm like he tracked elections and polling results — always with an unflagging hope that one day the earth would find a harmonious balance, injustices would be righted, and greed would be conquered.

In the hours before Dal died, he spent a sunny fall afternoon trimming trails through the woods, surely planning the next timber project, thinking about a plantation that would not be ready for harvest until the next generation. A few miles away, Tony and I were admiring the last of our new cows that had arrived a few days earlier — short-legged, fuzzy things suited for grazing our northern pastures without the need for corn. A rare, old breed, brought back from a simpler time.

Stuart, Colton, and Chelsea leaned their long teenage bodies over the fence in a vain attempt to pet the shaggy black heads as the cows eagerly gobbled a bale of hay.