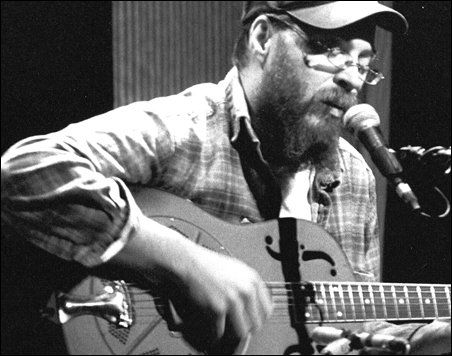 You could forgive Duluth’s Charlie Parr for wincing a bit when he first heard his song on a viral Internet ad for international mobile giant Vodafone.

The soundtrack is quintessential Parr: the quiet engine of his blues guitar fingerpicking and the jumpy growl of his voice. The scene, however, is completely alien to the shadow America of Parr’s songs: It’s a beautiful man in a beautiful apartment. There’s a beautiful view out the window and a beautiful woman in the bed. “When you’re part of the world’s largest international mobile network,” a narrator says over Parr’s song, “you can take the world with you.”

At least 40,000 people have clicked on the ad on YouTube. In Australia and New Zealand, where the ad aired on television, Internet message boards are flooded with messages trying to figure out who this singer is and where he comes from.

You don’t hear American stories like 40-year-old Charlie Parr’s anymore. His father came up on a tenant farm in northern Iowa with 17 siblings and rode out the Great Depression on freight cars. He rode them to Appalachia and Texas and every other corner of the country. He finally settled into a job shoveling animal parts at the Hormel plant in Austin, Minn., where he got active in the union and met his wife.

Job took its toll
The job cost Parr’s father two rotator cuffs and literally broke his back. He quit just before the long and tumultuous strike of 1985, but volunteered at the union hall until lung cancer took him in 1995. Parr’s mother stayed through the strike but refused to return when the strike ended, disgusted with its resolution. She does hospice work in Austin now — at 80.

Charlie Parr dropped out of high school just one year in and left home to see the country. He settled in a rooming house in the West Bank neighborhood of Minneapolis in 1985 just like an endless lineage of Minnesota troubadours before him.

When Parr talks about the routine of his West Bank days, he might as well be talking about the scene that preceded him by three decades.

“I’d go and see Dave Ray and Tony Glover at Hard Times on Thursday. Then it’d be Willie Murphy at the 400 Bar on Friday and Spider John Koerner on Sunday at the Viking.”

Songs heard in childhood
In his room behind the Mixed Blood Theater, Parr was plucking his way through the songs his father had been playing on the family’s Magnavox stereo console all through his childhood — songs by Elizabeth Cotton, Fred McDowell, and Doc Boggs collected and released by great American folk music archivists like Alan Lomax and Harry Smith. “The newest music my dad listened to,” Parr says, “was Johnny Cash.”

For every song about a factory town, union battle, or soup line, Parr’s father had a story from his travels. Parr tried punk rock — Husker Du, the Minutemen and the rest. “Then my dad pointed out that The Clash was really just really loud folk music. I resented that at the time, because I was trying to rebel.” He came quickly back to the folk and blues he came up on. “That’s always been the music that hits me right in the gut,” Parr says. “I have a visceral reaction to it.”

The song on the Vodafone ad is a tribute to his father called “1922” — that’s the year his father was born. The song is a perfect tribute to the hard-times ballads of the ’30s and ’40s: “Well I worked all summer couldn’t save a cent gave all of my money to the government. I don’t know how it got spent but the banks are coming for my deed boys … ain’t that the way it is?”

You can imagine, then, Parr’s reaction when he first heard his song attached to the good-life imagery of the Vodafone ad. “It’s about my father hopping freight trains,” he says. “I wasn’t thinking about yuppies when I wrote it. It’s kind of embarrassing.”

The Vodafone story
These days artists you’d never figure for the commercial licensing types are selling their songs to corporations. But that’s not what happened with Parr and Vodafone.

“I do a lot of film music, and an Australian director was talking to me on the phone and he said he was directing this commercial and he wanted to use my song. I said sure.” For most artists, publishing rights would have kicked in and Parr stood to make tens of thousands of dollars. The thing is, Parr, who releases his records himself or on small record labels that allow him full control of every aspect of recording and marketing, has never bothered with the paperwork required to register with publishing companies like ASCAP or BMI. “It’s not a principle thing,” he says. “I just don’t like paperwork. I like playing guitar.”

Still, Vodafone cut Parr a one-time check. He won’t say how much, just that “they wouldn’t have had to do that.”

There have been other benefits of the ad. He has a record deal in Australia now and just about 30,000 people know about a bar in Winona called Ed’s. There’s a YouTube clip of Parr playing “1922” at Ed’s, a place where, Parr says, “you can fit maybe 100 people — in a pinch.”

Here are the two clips: the Ed’s performance:

and the Vodafone ad:

Worked with the homeless
Parr is a working musician. He used to work as a homeless-outreach worker, but left the job to take care of his kids. He didn’t make much working with the homeless (“It’d be weird if I did,” he says) and figured eliminating the cost of day care for his two kids, ages 2 and 7, would just about cancel out the effects of no income — and he’d be able to play more guitar.

“Before the kids I’d play six or seven hours a day. Now it’s just one or two—I put my head down like a bull and just play. Sometimes the baby will come up and put his hands on the strings to stop me.”

He’s on the road all the time. During the summer, when his wife, a drama teacher at a Duluth high school, is off in the summer, the whole family goes on tour in a minivan. During the year, it’s long weekends or weeklong outings — of the 10-hour-a-day drive and sleeping-in-the-van variety. “It’s much better for me with the family. I eat better and stop a lot — you’ve got to show the kids the dinosaur bones and kick the soccer ball around a bit.”

“I go down to Southwest Virginia three times a year and I always play with this string band called the Black Twig Pickers. I finally convinced them to come up here. In their world, music surrounds them. I told them it was just like that in Minnesota.” They didn’t buy it, but they came just the same.

“They were astounded by how much good music we have here. We’re lucky. In other states a scene like ours is hard to come by. We’re spoiled.”

Jeff Severns Guntzel writes about the arts and other topics for MinnPost.