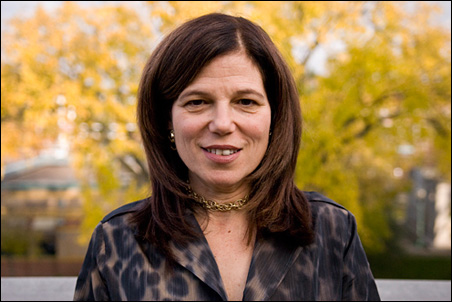 MinnPost photo by Daniel Corrigan
Rabbi Marcia Zimmerman of Temple Israel in Minneapolis is working to raise consciousness among Ashkenazi Jewish women about their increased risk of developing breast cancer.

You’ve probably noticed that it’s National Breast Cancer Awareness Month. There’s a lot of pink, seemingly everywhere. The coffee shops are selling their own special “awareness” roasts and mugs. There are pink ribbons and T-shirts aplenty. You can even buy pink-ribbon dog food.

It’s a public service strategy that some find unseemly, but even the most ardent critic of the marketing blitz agrees that awareness of breast cancer has increased exponentially in recent years because of it.

Despite all of the successful consciousness-raising, there’s more to do.

For example, there’s a message about the disease that doesn’t appear to be reaching a population of women that needs to hear more about the elevated risk of hereditary breast cancer they face — Jewish women of European ancestry, called Ashkenazi Jews.

To date, Ashkenazi Jewish women are the only ethnic group geneticists have found that carries a higher rate of a specific gene mutation that increases their risk of breast cancer.

Ellen Perl, who is of Ashkenazi descent and a recent survivor of breast cancer, says her community is made up mostly of highly educated women who are generally savvy about their health.

“But they’re not aware that there’s a … greater risk of breast cancer for them,” says Perl. “As I started to use these numbers with my friends, I can tell that they’re not (aware).”

Perl, 53, lives in South Minneapolis with her family. She educated herself about the genetic link while dealing with her own cancer, and she wants to help other women learn more about it so they can have the knowledge she wishes she had possessed years ago.

After her 77-year-old mother died from breast cancer in 2005, Perl started having suspicions about the health of her own breasts.

“Mine felt heavy,” Perl says. “It wasn’t a lump. Nobody could feel a lump.”

A mammogram showed nothing but “density.” Perl says she has had many previous mammograms that always turned out that way. But this time, her doctor ordered an MRI and an ultrasound. Those higher-level tests found Perl’s cancer. As a prophylactic measure, she had a double mastectomy and had her ovaries removed.

Perl is now clear of cancer but now faces another hurdle — finding out whether the cancer tendency has already taken root in her children, a 20-year-old daughter and 17-year-old son.

“There’s no question that I have to take the test — because my children have to know,” says Perl.

Test can screen for dangerous gene mutation
The test Perl will take screens for specific mutations: the BRCA-1 and BRCA-2 (short for Breast Cancer 1 and Breast Cancer 2) genes.

Perl plans to take the BRCA test in a couple of years, when she and her children are ready to handle the results and possible consequences. If Perl has the gene, her children will be tested. “If they end up not having it, then it stops with me,” says Perl. “That would be ideal.”

If Perl’s daughter has the mutation, she might be advised to get radiologic screenings every six months, alternating between mammograms and breast MRIs.

Additionally, women who carry the gene could decide to have their ovaries removed as a prophylactic measure. The hormonal changes that occur by removing the ovaries have been found to reduce the chances of breast cancer in pre-menopausal women substantially.

The BRCA-2 gene has been linked to an increased risk of male breast cancer and prostate cancer. So if Perl’s son has the gene, he could elect to have prostate screening earlier and regularly. The information also would be valuable for any future offspring.

For anyone with the gene mutation, the focus is on prevention — with regular screenings and increased vigilance for early detection.

Knowledge of mutation carries emotional burden, too
Kristen Niendorf, a genetic counselor at the Humphrey Cancer Center at North Memorial Hospital in Robbinsdale, says people with the mutation also have to deal with the trauma of knowing about it.

“We discuss with them the impact on their lives and family members,” says Niendorf. “We also make referrals to mental health providers. Because lots of issues arise, like how to tell other members of the family, and what is a good age to tell your children and how.”

The significant emotional impact is one reason why doctors do not recommend every Jewish woman run out and get tested for the gene mutation. Cost is another factor.

Niendorf calls it “prohibitively expensive.” She says the screening costs anywhere from about $450 to $3,000, depending on whether only a portion of the gene is tested, or the entire BRCA-1 and BRCA-2 genes, which are very long.

The only people who should get the test are those whose family history suggests a heredity predisposition, Niendorf says. There are four criteria that help doctors and patients decide whether genetic testing is appropriate, she says.

“First, are there multiple people in a family with the same cancer?” explains Niendorf. “The second thing to look for is if those cancers were diagnosed at early ages. Fifty or 45 years old would be considered early onset. Third, do the cancers occur in multiple generations? That would suggest the trait is passed on in the family. And fourth, we look to see if there is more than one kind of cancer in the family.”

Another argument for not taking the test unless those family factors are present, she says, is the chance of undue worry caused if other gene mutations are discovered that are not associated with increased cancer risk.

“So, if you randomly test people and find a variation you haven’t seen before,” explains Niendorf, “that may unnecessarily concern someone, and may not be related to cancer risk. It may just be a variation within the gene that that has no negative effect.”

Support in the synagogue
Rabbi Marcia Zimmerman of Temple Israel in Minneapolis says she has buried too many congregants who have died from breast and ovarian cancer (they are both linked to the BRCA genes). She says she started learning about the genetic link when several temple members became ill. Zimmerman is widely seen as being at the forefront of raising awareness of the health risks specific to her community.

“The synagogue is a perfect place to be the catalyst for that, and advocate for Jewish women,” says Zimmerman. “To watch women have the strength of character and strength of spirituality through this process of diagnosis and treatment is profound for me as a rabbi.”

But, she says, “I would rather have it on the other end, where I could counsel women around the spiritual aspects of knowing they have the gene or getting early detection and those kinds of realities. We haven’t done much of that, and that’s where we have to go to save lives.”

Zimmerman has put together panel discussions on the issue at Temple Israel. She also gives sermons on it, especially as part of a healing program during Yom Kippur, the holiest day of the Jewish year.

But Zimmerman wants to do more. She’s thinking of a campaign that would put posters in the bathroom stalls of Jewish institutions telling women about their increased risk of breast cancer because of their genetic link to the disease.

“That genetic connection is very important,” says Zimmerman. “When you go in for a mammogram, make sure you tell your doctor you’re Ashkenazi. Because if you have the gene, your chances of getting cancer rises to 80 to 85 percent. I think that’s really what people don’t know. When you hear those statistics, it’s mind-boggling.”

Zimmerman also thinks the medical community should be more proactive and not place all of the burden on the patient. For example, she thinks doctors’ health intake forms should include a box to check if you’re Jewish and of Ashkenazi descent.

Though it seems like a simple solution to improve the situation, checking a box is actually fraught with some possible social and legal side effects.

Douglas Yee, director of the Masonic Cancer Center at the University of Minnesota, says BRCA families fear that once they’re identified, they’ll lose their health insurance because they have a “pre-existing” condition.

“Any time you begin to classify people by ethnic or risk background,” says Yee, “it does put them at some level of potential health discrimination.”

Privacy issues aside, Yee agrees tracking the disease by Jewish ethnicity is not a bad idea. He says, too, the medical community could do more to connect earlier with their Jewish patients.

“I think physicians should ask (about Jewish heritage),” says Yee. “If you see a young woman in her 30s, and you’re doing the family history, you might identify a need for more intense screening, and if they’re of Ashkenazi descent, you would raise that bar a bit higher.”

One reason why education about the breast cancer gene has been slow to translate into increased vigilance by both doctors and patients could be because it’s a relatively recent discovery. The BRCA-1 and BRCA-2 genes were found in the mid-1990s as part of the Human Genome Project.

Additionally, Yee says, the majority of breast cancer cases do not originate with the BRCA genes.

But, Yee suggests, that’s little comfort to families with the BRCA mutation, where the risk remains very high.

Cancer survivor Ellen Perl says she remembers reading an article in the New York Times in the mid-1990s. It was about the discovery of the BRCA genes. Perl says she thought to herself, “Wow, I’m an Ashkenazi Jew. I wonder if I have this gene,” but she says that the awareness didn’t move her to talk to her doctor about it.

She’s hoping other women will listen to their intuition when they learn about the gene and be more proactive about their health.

“We need to make Jewish women aware of this, but not fearful,” says Perl.