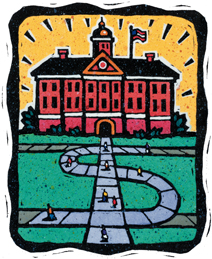 No one needs to tell Minneapolis school officials that it’s not exactly the best time for them to be asking for money. A housing crisis, weak economy and political uncertainty suggest residents might not be too excited to vote themselves a $17-a-month property tax increase to pay for schools.

But decide they must on Nov. 4. The Minneapolis school district is asking homeowners for $60 million a year for the next eight years.

Voters overwhelmingly approved a referendum in 2000 with 73 percent of the vote. Since then, tax dollars have added $615 per pupil to the district’s base funding. The new 2008 referendum would about double that to $1,200 per pupil.

“The biggest obstacle to this passing is the economic crisis in the country, no question,” says Minneapolis School Board Member Pam Costain.  “We know people are hurting. While I understand it’s difficult to vote yes (on the referendum), it has tremendous payoff — not just for individual kids, but for the city and the economy.”

Costain says the money will be spent wisely, with reform in mind. The levy dollars would fund deeper investments in early reading skills and math and science education. The money would also buy updated technology and new textbooks. Costain says half of the money, $30 million, would go to reducing class size.

District focusing on raising student achievement
“We need this money because Minneapolis Public Schools has a very ambitious plan to raise student achievement, and we really can’t do it without this referendum,” she says. “If we lose, it would be devastating.”

To date, there has been no organized opposition to the proposed levy increase.

But even though the “Strong Schools, Strong City” campaign staff has met with hundreds of community organizations and block clubs to explain the referendum, there is some concern that voters have been focused on the presidential, U.S. Senate, and legislative races and, therefore, know very little about what’s happening on the school district level.

“I don’t think all the voters are aware,” says Scott Croonquist, executive director of the Association of Metropolitan School Districts. “It’s a huge challenge when you’re getting four or five pieces of (election) literature. Voters start to tune out referendum campaign-related messages. We worry if voters go into the polling place on Election Day and haven’t really studied the issue and really understand what money is used for — the gut-level reaction would be to vote no on a tax increase.”

Despite Croonquist’s concerns, and the fact that only 16 to 18 percent of Minneapolis families have children of school age, it appears that many people who do know about the measure are saying they’ll support it.

“I always vote for it,” says 65-year-old South Minneapolis resident Maureen Malloy. “I have an interest in seeing the district be the best it can be. I’m always for anything to help the schools.”

Malloy is retired, and her children are grown. She voted for the referendum in 2000 because the district said the money would go toward reducing class size. “Class size is very important to me — not just for students but for teachers, too,” says Malloy.

Opponent frustrated with district ‘reneging’ on promises
Initially, classes did get smaller as part of the infusion of money from the 2000 referendum. But three years ago, class sizes started growing again, and that frustrated parents like South Minneapolis resident Sue Tincher, who says she will vote against the new referendum.

“I did vote ‘Yes’ on the last referendum but was very disappointed that what the district promised, it reneged on in a few years,” says Tincher.

Tincher, who has two children in the school system, says she knows her opposition puts her in the minority. “Everybody’s supporting it,” Tincher says. “It’s very difficult to say I support kids and public education, but I’m not going to give money. … Throwing money at the problem won’t solve anything. I don’t believe the district can be relied upon to do something accountable with the extra money, and I don’t have faith that they will use the money responsibly.”

Board member Costain responds, “It’s fair to ask for accountability for the money, because schools get a lot of money.”

She says “every dime” of the 2000 referendum revenue did fund smaller class sizes, but it wasn’t enough. “What the money bought eight years ago is different than what it bought four years ago.”

Costain says the district’s money woes were exacerbated in 2003 by the massive state budget deficit. Additionally, she says, base education funding from the state hasn’t kept up with inflation, and federal special-needs requirements go unfunded, so the district has had to shift costs, which led to layoffs and bigger class sizes.

“It’s true that education is expensive,” says Costain. “In Minneapolis, we have really high needs. Over 65 percent of the kids live in poverty, 5,500 are homeless or highly mobile, moving three times a year, so housing is very unstable. And a huge number, about 40 percent, are English language learners, and 16 percent are special-needs kids.”

The complaint that public schools are underfunded has become the underpinning for school operating-revenue referenda for years now.

Croonquist of the Association of Metropolitan School Districts says when the “excess levy” law was passed in the 1970s, it was intended for extras, including supplies or a new gym, but very few districts exercised their taxing authority.

Today, that couldn’t be further from the truth.

“Now, 90 percent of school districts in the state have a referendum in place,” says Croonquist. “In the metro area school districts, it’s not uncommon that 10 to15 percent of their revenue comes from referenda. That tells you how important that funding stream is.”

So far, change is not in the wind. And next session is looking bleak for lawmakers as they deal with rising costs and a shrinking budget.

So, until there’s an overhaul of the way the state funds education, districts must hold out their hat every few years and hope voters are on their side.

More Minneapolis school ballot issues
Another Minneapolis Public Schools measure on the ballot is the ABC (for Accountable, Balanced across the city, and Connected to the Community) Referendum.

The proposal would increase the size of the school board and change the way members are elected.

The current seven-member board is elected through an at-large system, which means anyone can run no matter where they live. The ABC Referendum would add two board members, with the majority of them (six) elected by geographic district, mirroring the Park Board districts with three in the eastern and three in the western halves of the city. The remaining three seats would remain at-large. Eleven districts in the state elect their school boards by district.

The ABC referendum stems from a 2006 state law that gives the Minneapolis district the authority to change its governance structure to geographic representation. The measure was defeated in a 4-3 vote by the Minneapolis School Board last December. As a result, however, the matter goes on the ballot for the public to decide.

Supporters of the ABC referendum say the current system does not fairly represent the city. They say the restructuring proposal would create more diversity on the board and ensure that each of the members knows the schools and communities in their areas. Supporters say it’s the best way to address such district problems as declining enrollment and dwindling resources.

Opponents say the ABC proposal would “Balkanize” the district, with an increased potential for horse-trading and more political maneuvering. Dealing with reform proposals could be messier, too, they believe. Critics also say it takes away a citizen’s right to vote for all board members and instead puts the election in the hands of specia- interest constituencies.

While passage of many of these measures will be challenged by the weak economy, Minneapolis Public Schools has the advantage of being in a heavily Democratic town in what may well be a big Democratic year. So, politically, this election may actually be a very good time for the school district to go to the public with its proposals.