This is not Michele Bachmann’s first time — nor will it be her last — backpedaling like Michael Jackson in the “Thriller” video.

Bachmann has a history creating uproars with out-of-line comments and actions that are out of touch with her district and mainstream Minnesotans. This time she seems to have done it with someone she’ll have trouble attacking, MSNBC’s Chris Matthews, because he’s as tough as they get.

Still, it’s vintage Bachmann: She’s spent most of her time in the state Legislature and Congress finding bright lights and cameras as her main strategy to put forth her conservative agenda.

For instance, she has had more appearances on “Larry King Live” than debates with El Tinklenberg, her DFL and Independence Party opponent in the 6th District congressional race. She was on King again Friday night after her “Hardball” appearance with Matthews — but before the comments settled in and caused a storm.

Since previous behavior is a strong indicator of future performance, let’s review some of Bachmann’s other big moments since entering politics:

The light bulb
In March, Bachmann called a news conference to denounce the use of fluorescent light bulbs to conserve energy because they contain minimal amounts of mercury and introduced a bill to halt a program designed to phase out the use of traditional incandescent bulbs. Result: Bachmann was ridiculed at a time when even her own party’s governor was pushing conservation efforts. 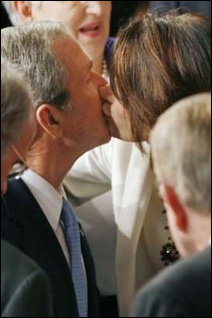 The kiss
The death grip that Bachmann put on President Bush after a State of the Union speech has become legendary. Laura Bush may have had family-value issues with that kiss.

“Iran is the trouble maker, trying to tip over apple carts all over Baghdad right now because they want America to pull out. And do you know why? It’s because they’ve already decided that they’re going to partition Iraq.

“And half of Iraq, the western, northern portion of Iraq, is going to be called the Iraq State of Islam, something like that. And I’m sorry, I don’t have the official name, but it’s meant to be the training ground for the terrorists. There’s already an agreement made.

“They are going to get half of Iraq and that is going to be a terrorist safe haven zone where they can go ahead and bring about more terrorist attacks in the Middle East region and then to come against the United States because we are their avowed enemy.”

Later, she was forced to backpedal because she either let out sensitive top-secret intelligence or she was simply making all of this up.

The sister
During the battle in the Legislature over Bachmann’s proposal to ban gay marriage, her step-sister Helen LaFave emerged to publicly announce that Bachmann had divided the family with her polarizing views on the issue. LaFave wrote this letter to the Star Tribune: 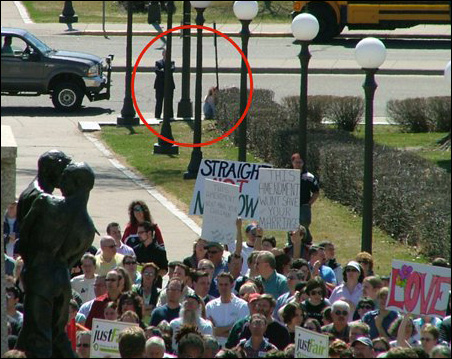 The bushes
Early in her state Senate career Bachmann was caught spying on a pro-gay-rights rally by hiding behind bushes. This incident occurred after she was profiled in the Star Tribune and photographed vacuuming in heels (see LaFave’s letter to the newspaper above). If there is one thing that’s out of touch with voters in the 6th District, it’s hiding in the bushes (unless to hunt) and vacuuming in heels.

This year independent minded voters in the 6th District may have had enough of the bright lights that accompany Bachmann. The economy and energy may have given Tinklenberg a chance to be competitive in this race, but it’s Bachmann herself who has presented Tinklenberg and the DFL an opportunity they will never get again.