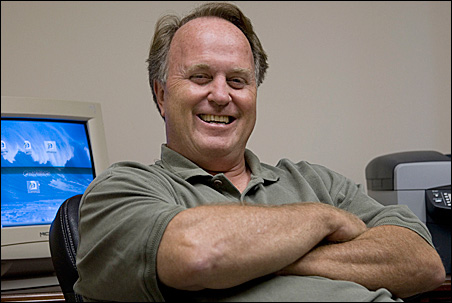 MinnPost photo by Bill Kelley
Dean Barkley, shown at his Plymouth law office, talks about his campaign efforts and the dynamics of a three-way race for U.S. Senate.

No matter how Minnesota’s U.S. Senate candidates are positioned for Sunday’s debate in Rochester, it will be Dean Barkley in the catbird’s seat.

Given the slop that Republican incumbent Norm Coleman and DFL challenger Al Franken have been throwing at each other in their costly and ugly campaign, the Independence Party’s Barkley will look clean by comparison. More importantly, Barkley will not be tied to any of the sorts of promises candidates from the two major parties make to various interest groups.

“You don’t have to worry about offending anyone,” is how Barkley put it. “You can simply be who you are.”

IP’s Barkley free of usual political constraints
Former DFL U.S. Rep. Tim Penny, who was the IP’s candidate for governor six years ago, gave an example of the freedom of being independent from party doctrines.

This freedom means a couple of things.

“It means I don’t have to do a lot of debate prep,” said Barkley, laughing. “I can say what I think.”

Ron Greene, a communications professor at the University of Minnesota, says that it means something else.

In recent years, the IP candidates often have sounded wise, compared with their Republican and DFL counterparts. Certainly, Penny and Peter Hutchinson, the IP candidate for governor, in the last two races sounded at least as wise as their foes. Even Jesse Ventura, when seated with the DFL’s Skip Humphrey and Coleman, in debates in the 1998 race for governor appeared as qualified, and more forthcoming,  as his foes. He laughed at them when they got involved in finger-pointing spats with each other, and he could answer honestly to any question, while Humphrey and Coleman frequently tried to dance around questions they didn’t want to answer.

IP candidates, including Barkley, have another big advantage:  Their opponents don’t know how to deal with them.

“Franken’s not taking Barkley seriously, at least outwardly,” said Penny. “He’s always framing the race in terms of him and Coleman. Coleman, on the other hand, is saying nice things about Barkley. The last thing he wants to do is sound dismissive of Barkley because that will offend some of the independent voters he has to have.”

Besides, Coleman tried being dismissive once before. In his gubernatorial race, he frequently told voters that a vote for Ventura would be “a wasted vote.”

Ventura was furious — and dislikes Coleman to this day. So were Ventura’s followers.

But  Penny, Barkley and the U prof all agree, the “wasted vote” issue is the huge stumbling block for every IP candidate.

Penny puts it like this: “You can win every debate, but you cannot assume that all those people who agree with you will vote for you. It doesn’t work out that way.”

A couple of reasons.

“The Independence Party candidate can sound wise, but not different enough to pull a Democrat or a Republican from their party. People who identify with their party aren’t going to be pulled away easily. They do fear it means wasting their vote — especially in a year like this when we keep hearing, ‘This is the most important election of our time.’ People want their vote to count in this election.”

Barkley faces the ‘wasted vote’ syndrome
Barkley, who served briefly as a U.S. senator when Ventura appointed him to fill the last two months of the term of the late Paul Wellstone in 1992, admits that the “wasted vote” fear is a far greater obstacle for him than either Coleman or Franken.

The recent surge he showed in the polls — two local polls two weeks ago showed him the choice of about 14 percent of the voters — have been helpful. But, he says, that surge needs to rise considerably higher in the next couple of weeks.

“I have to get to the 25 percent level (in the polls),” Barkley said. “If that can happen, then people will stop and say, ‘Something’s happening here. …’ ”

To date, his best source of support for any chance of a rise have been Coleman and Franken. The ugly ad campaigns being run by the two candidates — and their surrogates — have torn both of them down and, in the process, lifted Barkley up.

“I especially like the one about rape,” said Barkley, laughing at the absurdity of the Republican Party ad supporting Coleman that refers to a skit Franken once proposed.

Greene, the U prof, predicts that neither Coleman nor Franken will be as ugly in their debates as they are in their campaign commercials.

“They’ll attack carefully,” Greene predicted. “The last thing they want to do is intensify the idea that they’re nasty. The attacks will be policy-centric, not personal.”

So look for Coleman and Franken to continue what they tried to establish back in August in a debate at Farmfest in Morgan, Minn.

Franken will attempt to tie Coleman to “big interests” and President Bush. Coleman will attempt to ignore Franken’s attacks and establish himself as an independent senator who “can work across the aisle and get things done.” Barkley, as he’s done since he entered politics and given life to the state’s independence movement 16 years ago, mostly will talk about how “immoral” it is to pass on the national debt to our children and grandchildren.

But he’ll have one other huge job to do. He will try to sell the idea that a vote for him is not a wasted vote.  He’ll try to convince voters that it’s the two-party, finger-pointing system “that’s got us in the mess we’re in.” But there is a third choice, he’ll say often on Sunday and in coming days.

Here is the schedule of five debates in Minnesota’s U.S. Senate race.

Three of the debates, including Sunday’s debate, are sponsored by Debate Minnesota, described as a multi-partisan, nonprofit group.

In addition, the candidates will debate Oct. 24 on public television in the Twin Cities and Nov. 2, two days before the election, on Minnesota Public Radio.

Minnesota is the most promiscuous of states (when it comes to U.S. senators)
By Eric Black
4/25/2008

OTHER
Independence Party of Minnesota

No matter where candidates sit for Sunday’s first Senate debate, Barkley will have the catbird’s seat