WASECA — It’s not hard to spot the Penny home here. There’s a campaign sign for John McCain — and two for Barack Obama.

Ah, this is a lovely brick house divided. But it does not fall. The Pennys remain pleasant with each other. Why, they (usually) even laugh about their differences.

In the midst of such a passionate campaign, how do they manage to keep their political discussions civil?

Start with this:  The two major Penny combatants are father Tim, the former DFL congressman who now calls himself an independent, and son Marcus, a 23-year-old student at Mankato State University. The father has endorsed McCain; the son is one of the thousands of Obama volunteers in the state.

But it’s not just Marcus, the youngest of Penny’s four children, who disagrees with his widowed father. The former congressman’s extended family — two other sons who are on their own, and his daughter, Molly, who lives there with her daughter and toddler son — also are Obama supporters. Even Molly’s daughter, Ramona, who is 4, disagrees with her grandfather about presidential choices. 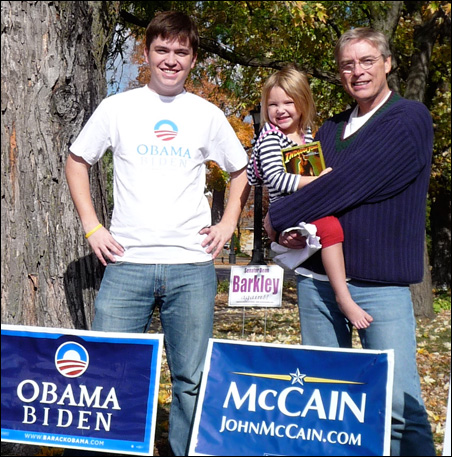 MinnPost photo by Doug Grow
Marcus Penny, left, and father Tim Penny don’t agree on their presidential choices but, even in these divisive times, have mastered the art of peaceful co-existence. Granddaughter Ramona, meanwhile, sides with the family’s Obama supporters.

“Who do you like?” Ramona was asked while hugging her granddad.

“Do you like John McCain,” Grandfather asked the little girl.

“A little,” she said, wrinkling her nose.

“I have a 26-year relationship with him,” said Penny, who was the DFL congressman from Minnesota’s 1st District from 1983 to 1995. “I have always had tremendous respect for him. I’ve witnesses his capacity to work across the aisle. I just cut him some slack on campaign tactics. I believe the essence of the man is his integrity and his public service. … A year before McCain announced he was running, I told him if there was anything I could do to be helpful, I’d be happy to help.”

Marcus rolls his eyes a bit on those glowing words, taking a couple of shots at his father.

“You knew John Kerry too,” he said, noting  that his father voted for Kerry in the 2004 presidential election but would not endorse him. “Back then, he said he wanted to keep the Independence Party front and center.”  (Tim Penny ran on the IP ticket for governor in 2004.)

The father always seems to answer the son patiently.

“I knew Kerry, but not personally,” said the father. “I didn’t have the legislative alliances with him the same ways as I had with McCain. It’s easier to explain publicly why I endorse McCain. He’s bipartisan. He worked to normalize relations with Vietnam. He truly is a maverick.”

Another shot comes from the son.

“People would think you were in the Senate with McCain, not just the House,” Marcus said.

His father smiled, shrugged his shoulders and looked at me as if I could offer relief.

Key to civility: Avoid the extremes
The key to civility, the former congressman said, is to try to eliminate concepts of good and evil.

“He doesn’t think that I’m a communist, and I don’t think he’s a fascist,” said Marcus of his dad.

Marcus  admits he had more good will toward McCain a few months ago than he does now.

“I watched every Republican debate,” Marcus said, saying he was impressed with McCain then.

But he believes McCain has demeaned himself in recent weeks.

“His campaign is trying to do the Karl Rove thing,” said Marcus. “On issues like immigration, he says he wouldn’t even sign the immigration bill that he helped write.”

His father acknowledged his son’s diminishing respect with a nod of the head.

“I don’t approve of all the tactics,” he said.

But campaign tactics always seek to raise the temperature of races.  A few years ago, Tim Penny wrote an article about how most of us would be better served by “paying no attention to TV commercials and hanging up on all polling calls.”

Marcus can’t ignore the tactics.  He’s furious, for example, about the robo-calls that have been used in many states, linking Obama to terrorists.

“That’s the one time I get angry with him,” said Marcus of his father. “It’s when he’s ignorant of some tactic that’s being used in the campaign.”

But the anger is infrequent. The discussion are constant, though the son is a little befuddled about his father’s technological skills.

“I sent him a text message a few days ago at 6 a.m.,” said Marcus. “It was about Colin Powell appearing on ‘Meet the Press’ and the Washington Post endorsement.”

“I don’t know how to retrieve a text message,” said Tim. “But my phone made this little beeping sound. So, I called him. He answered and said, ‘Funny you should call. I just texted you.’ ”

No matter what happens in the presidential race, father and son have managed to find some common political ground, and they display that view in the yard, too. As the campaign sign for Minnesota’s U.S. Senate race attests, they’re both backing the same candidate: the Independence Party’s Dean Barkley.