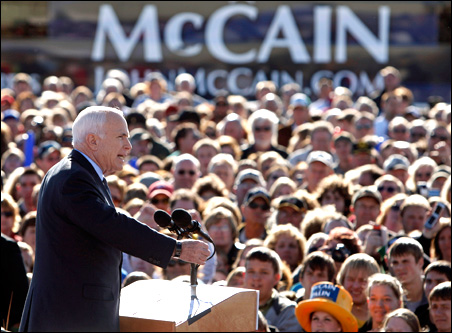 Sen. John McCain will have many objectives in mind when he flies into La Crosse for a 9 a.m. rally today and then continues on to the Twin Cities for a 4 p.m. town-hall forum at Lakeville South High School.

In one day’s visit, he wants to energize his base, woo undecided voters, raise a little money and get that all-important media coverage.

Sen. Barack Obama‘s  campaign will be back in the state Monday, when his wife, Michelle, attends a Rochester event in the morning and comes to the Twin Cities in the early evening. Final details haven’t been released.

Both campaigns will continue these kinds of whirlwind stops in key states in the closing month of the presidential campaign, often hitting border towns, such as La Crosse, to double-up, or even triple-up on the media coverage in adjoining states.

Recent published polls, though, seem to indicate a healthy Obama lead in Minnesota, which raises a question about what McCain hopes to gain with a personal visit here, when he could be hitting other, possibly hotter spots.

He’s coming because there’s more beneath the surface, says Sarah Janecek, Republican strategist and publisher of Politics in Minnesota.

“The internal McCain polls are not as bad as the polls being published, and I think the Obama internal polls must show the same thing,” she said. In other words, it could be close, and having McCain in this market matters.

Indeed, Tom Steward, communications director for McCain in the state, said Minnesota “is one of the key states on our map. We’re closing in, and we’re going to contest the state. Minnesota could make the difference.”

The same thing happened in 2004, for similar reasons. President Bush and Sen. John Kerry each made eight Minnesota campaign stops in the last presidential campaign because the state was in play and, for the first time in decades, Republicans sensed they had a chance here. Kerry ultimately won with a 51-48 margin.

So we’ll likely see more of both camps, although both say that flexibility is key in tactical planning in the final weeks, so they won’t be scheduling the candidates very far in advance.

First: Energize the base
What’s to gain by personal visits?

“It really does get your base fired up,” Steward said. “The volunteers have been putting in countless hours, at night and on weekends, and an event like this gets them close to the candidate and gives them a better sense of what they’re fighting for.”

He said this is McCain’s fifth trip to Minnesota this year, which includes his acceptance of the party’s nomination at the Republican National Convention in early September.

Nick Kimball, Obama’s communication director in Minnesota, said the volunteers love to see the candidate and that Obama already has been here three times this year and once in the summer of 2007. (Disclosure: Nick Kimball is my nephew.) 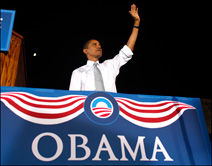 “We love to have him in the state, but candidate visits are just one part of the campaign, along with grass-roots organizations and the 15,000 volunteers,” he said.

“There’s a tiered system: You send the main guy to places where there’s a real question of whether you’ll win, like North Carolina,” he said. “But in Minnesota, Michelle will do a very good job at bolstering the troops and keeping everyone pumped up.”

In McCain’s case, after basically withdrawing his campaign from Michigan, a personal visit to  Minnesota  “screams: ‘I’m not dropping you.’ It shows the state is still an important place,” Spano said.

Second: Court the undecideds
Candidates also believe that by showing up in person, they can command a good share of the local media, thus carrying their message – without paying the ad rates – to undecided voters.

“We want the candidate to talk not only to the base, but also to undecided voters, and give them the chance to hear directly from the candidate’s mouth where he stands, and how he can get us out of this economic crisis,” Kimball said,

Steward said: “We’re encouraging independent voters and Democrats to get tickets [for McCain’s Lakeville event] because it’s an opportunity to get the message personally, first-hand. And you hope to get the media to put the message out, both in the days leading up to the rally or the forum, and the post-event coverage afterwards.”

Curt Reithel, chair of the political science department at the University of Wisconsin-La Crosse, agreed.

“The appearances give them a chance for extra publicity. It’s usually the dominating news event in the community, so it gets big headlines in the local paper and lots of television news time,” he said.

And because tickets are needed for the McCain events today in La Crosse and Lakeville, and names and e-mails are collected at many events for both parties, the candidate appearances generate lots of new contacts for the campaigns, Reithel said.

Third: Raise some dough
Often, candidates combine a public rally or forum with a fundraising event, often a big-bucks event with wealthy backers. This late in the campaign, though, there’s often not time for much of that, because the candidates are moving quickly from place to place.

Janecek said donors sometimes pay to have their photos taken with the candidate, but lately there’s been a migration of fundraising to the Internet, making it less of a factor at  candidate appearances. Spano, too, said campaigns traditionally have put a big emphasis on handshake fundraising, but Obama’s success with online fundraising during the primary campaign has made that less of a worry for organizers.

Altered states
Obama stopped in La Crosse Oct. 1, and McCain is there today. In recent years, that Wisconsin border city on the Mississippi River has also seen Presidents Clinton and Bush and candidates Al Gore and Kerry.

“In La Crosse, there’s a lot of overlap between the states, and a lot of media within range of that will travel there to cover the candidates personally,” Steward said.

“There’s an added benefit to a location that is central to a lot of voters, and if those voters come from two or three separate states, that’s an added bonus,” Kimball said.

Reithel, the La Crosse professor, said his city has seen much benefit from the candidates’ attention.

“The local community benefits from all the attention, people come downtown to the rallies, and they shop and eat,” he said.

His classes will be canceled this morning, so students can go see McCain at the La Crosse Center; he did the same thing when Obama appeared there last week.

“It’s a great opportunity to see them in person; one of them will be the next president,” he said.

And he’s gratified by students’ reaction: They vote.

“In the last presidential election, there was something like a 98 percent turnout for the UW-La Crosse campus. That’s amazing, and a part of it was, I think, the opportunity they had to see the candidates in action.”