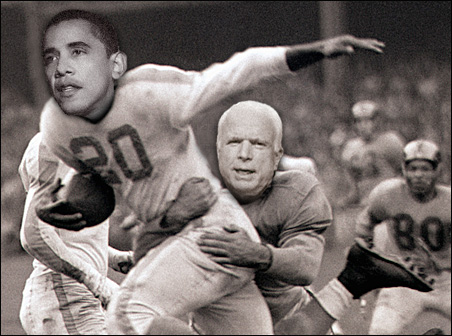 Here’s what the pundits likely will kick around in the pre-game shows before tonight’s final presidential debate.

Barack Obama will attempt to “run out the clock,” they’ll say. With the electoral scoreboard and recent polls showing him ahead, the Illinois senator should avoid any verbal or visual fumbles.

John McCain, the crafty veteran, is bound to go on the offensive, perhaps, my friends, intensifying the trash talk. He might even have some trick plays up his sleeve.

Obama should be prepared with a soft, but effective, “prevent defense.”

Like many of us in describing political fates, observers often turn to sports metaphors. With their elaborate electoral scoreboards and stats and lingo, the talking heads sometimes can’t seem to help themselves, turning CNN and its competitors into a political ESPN. This time of year, their lips may stick to pigskin jargon.

But what of such football-tinged political strategies? When a team leads by seven points with, say, two minutes to go, does the prevent defense work? Or does playing it too safely invite danger?

When the team owns a sizable lead and controls the ball, should it meekly run out the clock? Or should it march forcefully down field and put the contest away by denying its opponents any chance of a last-second Hail Mary comeback?

We went to experts: three local college football coaches who know what it takes to close a deal.

Prevent defense
John Gagliardi, the winningest college football coach in history, began devising game plans when Harry Truman was president. He’s coached at Collegeville’s St. John’s University longer than Robert Byrd’s been in the Senate. Gagliardi was entering his ninth season with the Johnnies in 1961, the year Obama was born.

“The older I get, the more conservative I get,” he said.

At 82, Coach Gags can’t get too much more conservative. But he’s no fan of the “prevent defense.”

“We try to let them have the short ones,” Gagliardi said of the opponent getting a few yards here and there, rather than the big play. “But we try to keep doing what’s going best for us.”

Gagliardi, Macalester’s Tony Jennison and Bethel’s Steve Johnson all asserted that the notion of a prevent defense is overused and overrated. Generally, it means one or two fewer defenders rush the quarterback, remaining far back to halt any long throws.

“You’re ahead, and there is a sense of ‘Don’t screw it up, don’t let them have anything easy,’ ” said Bethel’s Johnson. “But the fundamentals of what you do have to remain intact, or you’re going to lose.”

If a defense plays it safe consistently in a final drive, Mac’s Jennison said, the other side “might just pick you apart . . . In my opinion, you have to change it up all the time to give different looks.”

Are you listening Sen. Obama?

On the McCain side of the ball, the question is whether to sustain a drive of short advances — “to nickel-and-dime them,” as Jennison said — or to attempt a few long bombs — so to speak — to break the debate wide open.

“It all depends how the game has been going,” said Gagliardi. Adjustments during the course of this evening’s debate will be key.

Bethel’s Johnson noted that, sometimes, in high-scoring offensive games, defense has to be thrown to the wind.

“Say we’re getting smoked all day by the other team,” he said, “but we’re scoring just as fast. Then, we’ll take a chance. We’ll open up our playbook. Because we know if they’ve got the ball we lose. If we’ve got the ball, we win.”

Run out the clock
Football coaches being who they are — competitive, serious, outcome-based — the notion of “running out the clock” grates on them.

“My players would burn me first,” Jennison said, if with a lead, he ever instructed them to play it safe and then got burned by a more aggressive opponent.

Still, when a team is ahead — like Obama — and the clock is running down — as it is — generally speaking, caution is the mode.

When the debate starts at 8 p.m. at Hofstra University, using that guideline, should Obama — whose defense has been strong the past three weeks — just stick with that?

If Obama feels that McCain’s aggressive offense has actually harmed the Arizona senator — as recent polls suggest — maybe he should just let the former war hero keep trying — and failing — to score on his attacks.

“Field position is a factor,” Gagliardi said. Every poll suggests Obama’s in good shape there.

“Weather is another factor,” Gagliardi said.

What a political sage the coach is!

McCain is expected to raise the Weatherman issue in the debate.

Taking a knee
No one says a team should play the final minutes not to lose. No one says that “playing it safe” is a mode they embrace.

“But you don’t want to do anything stupid,” said Johnson of the team that’s ahead.

Vikings fans will never forget the infamous knee that quarterback Randall Cunningham took in the 1998 NFC Championship. With the Vikings seeking the Super Bowl and 23 seconds left in regulation, Coach Dennis Green ordered Cunningham to fall to his knee, run out the clock and take a tied game into overtime against Atlanta.

The Falcons went on to win.  A dark hour in gridiron non-aggression found its way into NFL lore. The Vikings base — that is, their fans — booed.

Obama, it seems, risks alienating his base if he plays it too safe too soon. Some believe his early high-fives during the primary season allowed Hillary Clinton to push him to the final buzzer of the nominating process.

Bethel’s Johnson said “taking a knee” is the ultimate act in the absolute last seconds of a game. It’s a tactic used only when victory is indisputable and can’t be undone.

“That’s when it’s over,” he said of the moment that a quarterback or a candidate can stop all the talk and just wait for the tally to be put into the record books. “Taking a knee, that’s my favorite play in football.”

Gagliardi and Jennison didn’t offer any advice for the candidates tonight, but Johnson, the emotional Bethel coach, did. If Johnson were one of those high-priced consultants to either Obama or McCain, he’d tell them this in the locker room.

“You don’t get these many sorts of games in your life,” he’d say. “You’d better run it the way your heart tells you. I don’t like all this positioning, all this not saying something wrong. When you’re in a game like this, you’ve got to do it like this: ‘Here’s what I think. Here’s what I feel. This is in my heart. Boom. I’m going to do that way.'”

Such an emotional performance by either candidate could be a true game-changer, with the days ticking away like so many seconds on a stadium Jumbotron.

Jay Weiner writes about off-the-field sports issues, such as sports business and sports and public policy. He can be reached at jweiner [at] minnpost [dot] com.

Tonight’s debate: With a lead, will Obama run out the clock? Will McCain try a Hail Mary?