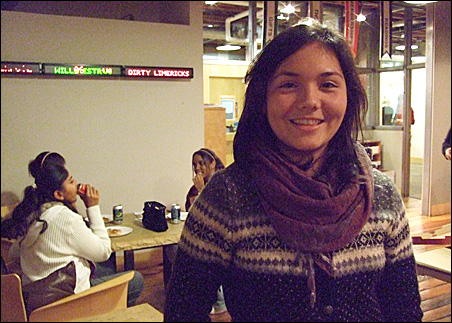 MinnPost photo by Marisa Helms
Magdelana Kaluza, 17, a student at South High School in Minneapolis, is too young to vote but still can make her voice heard through an InkTank poetry event.

On Tuesday, an estimated 100,000 Minnesota schoolchildren will cast their ballots for president.

No, it’s not a case of ACORN voter registration irregularities.

It’s totally legit, and it’s one of several local efforts to involve those too young to vote in the excitement — and learning opportunities — of the election season.

In 50 school districts across the state, Kids Voting is hooking up kids in kindergarten through high school with voting booths and ballots.

“They’ll go to the polling place with their parents on Election Day,” says Kids Voting Minnesota Executive Director Lars Sandstrom. “The kids’ ballot has the same candidates on it as the ballot for adults.”

Sandstrom says the Kids Voting program is a gateway to a lifetime of trips to the polls.

“Kids develop habits at an early age,” says Sandstrom. “And our philosophy is if we can get them into a habit of voting and understanding the process and what it’s about, then they’re more likely to grow into adults who are habitual voters.”

Sandstrom says Kids Voting creates not just voters, but informed voters. They use their website as a curriculum extender for public school teachers around the state. Each school district runs its own program and recruits high school-age and adult volunteers to man the polls and count the ballots.

Results from the last two Kids Voting presidential elections mirrored the kids’ parents’ votes, Sandstrom says, but didn’t necessarily go the way of the state.  In 2004, 67,530 kids voted through the Minnesota program. The majority went for John Kerry. But in 2000, the 31,000 votes cast by kids were split in a tight race where George W. Bush won by a razor-thin margin of just 150 votes. Hmmm, sounds familiar…

Sandstrom says his goal is to have 100,000 kids voting this election, and he’s right on track to hit the mark. “We could very well get there, given how much my phone is ringing of the hook,” says Sandstrom.

Kids Voting started in Phoenix in 1988 and now has affiliates in 30 states. Sandstrom says his research shows that adults ages 18 to 24 who participated in Kids Voting when they were younger tend to vote at a 15 percent higher rate than adults who have not been involved in Kids Voting.

“Kids Voting started in Duluth in 1994, and 10 years later, in the 2004 election, Duluth had 91 percent voter turnout, the highest turnout of any city in the country,” says Sandstrom. “We can’t take credit for all of it, but we will take credit for some of it.”

Hip and literati, but still too young to vote
For some kids, mock voting is just not where it’s at. They want to do the real thing and are pretty bummed they are a few years away from 18. Despite the fact they can’t vote, many teens are engaged in politics and have loads of opinions.

Magdelana Kaluza, 17, is a student at South High School in Minneapolis. She says she’s not particularly excited about either candidate because they don’t represent the change she thinks is needed.

“I would like to see a candidate who was OK with gay marriage and have it be called marriage,” says Kaluza. “I feel strongly about that. I’m also unhappy with the two-party system we have now and feel like those two candidates are playing into it, and that the two parties have become strikingly similar.”

Kaluza is a poet and part of InkTank, a teen writing group sponsored by the The Loft Literary Center in Minneapolis.

Here’s an excerpt from Kaluza’s poem she wrote about another issue she’s passionate about, immigration. It’s called “New Today.”

Today i fried 120 eggs and made breakfast for 60 people.

slid plates off to hands

supported by sore wrists, which

delivered the food to tables where it was

gobbled up, bite by bite, yolk and all.

Today i topped 230 cans and preserved that much of your jelly.

But the atmosphere took away any cravings to be had

with its metallic and oil-laden stench.

There are no more sweatshops in the U.S.,

Today i laid hundreds of shingles and protected two families from the rain.

Out here, it’s cold and wet,

dark ’cause of those fearsome, cover-all clouds.

hours upon hours to lay.

Health care is another issue Kaluza says needs more attention from politicians. She says she sees the repercussions of a lack of health care access all the time at school.

The Loft’s InkTank coordinator, Claire Wilson, says the idea to hold a poetry night to express thoughts about the election and the issues came from the students in the group.

“These are incredibly engaged,” says Wilson. “I think these are the most important voices out there now. They’re going to be most affected by this election. And they give me hope — in the way they’re engaged and tackling these big ideas.” 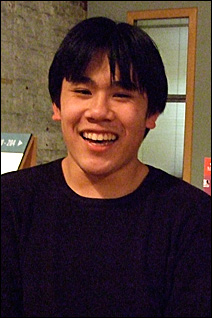 Another teen in InkTank who read his poem the other night is Christopher Cheng, a 16-year-old sophomore at Eden Prairie High School.

“Even though we can’t vote, everyone has a voice and an opinion, and everyone is affected by laws that are passed,” says Cheng.

Cheng expressed his views in his poem, “Election 2008 II”:

The colors of red, white and blue were so far apart

The people in this nation were so far apart

I see these in all directions

Despite my purest intentions

Republicans advocate “trickle down economics” that has yet to trickle down

Democrats advocate bigger government that has yet to impose higher taxes

Religious rights versus gays and lesbians

Cheng says the issues he cares most about are immigration and health care, and “feeling the crunch” on the economy.

“I would like my vote to benefit America,” says Cheng. But until then, he says, “Sorrow and opinions can really be expressed through writing.”

Classrooms alive with democracy projects
Younger students are preparing for Election Day, too. For many in the West St. Paul-Mendota Heights-Eagan School district, the teachable moment of the season has been age-appropriate reading, and cutting and pasting.

The district’s third- and fourth-graders have been learning about the history of the presidents, including reading the diary of the 38th president, Gerald Ford.

Teacher Steven Anderson says one of the students’ big projects has been making bookmarks to encourage adults to vote.

“They had to include some kind of patriotic picture and facts from research they have done,” he says “For instance, information about people who were denied voting rights in the past, or facts about how one vote has made a difference in politics.”

Anderson says the students donated the bookmarks to a couple of local libraries.

In the last days before the election, students will do an exercise in which they imagine they are the president. They then will write a few sentences in their own presidential diaries to discuss in its pages how they would deal with five official activities, including such tasks as hiring an adviser, coming up with an idea for a law, and handling a crisis.

Anderson says the kids are very interested in the material he’s been teaching them.

“So often in school there’s no time for current events,” says Anderson. “But this year, it’s a big election with a lot of controversy and a lot of hype. So it’s a great chance for kids to understand what democracy is about and that we’re lucky to live in a society where we can vote for our leaders.”