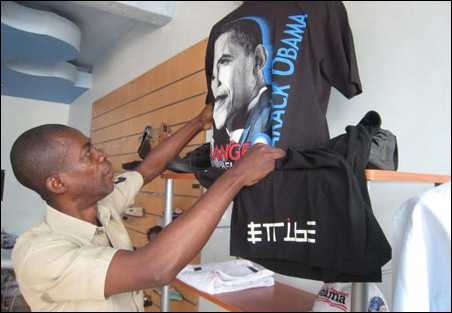 Which makes the display of “Obama for President” T-shirts near the front door seem a bit out of place.

That — and the fact that Nti’s shop is located on a narrow crowded street in West Africa.

“I’m just proud to witness this event going on at this time,” says Nti, a fashion designer and life-long Ghanaian. Wearing a khaki shirt, black slacks and leather sandals, he is small in frame, frail and quiet-spoken, except when you mention the possibility of Barack Obama becoming president of the United States.

“We believe that a black man being in that position, even if he doesn’t do anything for us, it brings us prestige,” he says, his eyes and smile widening. “It brings a lot of glory to the African nations.”

Nti’s brother, who lives in Maryland, sent him the Obama T-shirts, and I noticed the display had dwindled since I first stopped in Nti’s store two days earlier.  I came back to pick up a dress, and to ask Nti about the U.S. election and how he would feel if John McCain won.

“I don’t even want to think about that,” he said.

Speaks volumes to the world
“I think we will accept whoever the U.S. elects, but I guess people would be deeply disappointed,” says Mensa Otabil, [men-suh  oh-tuh-bill] general overseer of a network of local churches in Ghana, and founder and chancellor of one of the country’s first private colleges. Otabil, 49, is also the host of an annual speaker’s conference, which my husband attends each fall. Otabil says the symbolism of an Obama presidency is not lost on him or his nation.

“So many people who have migrated to America have had opportunity,” says Otabil. “The Jews, the Poles, the Irish, the Scots — every other group except those who came aboard the slaves ships and their ancestors, as well as those who came in later on. The stage had been narrowed in America for black people. And the fact that an African-American can be seen as a possible leader for such a major nation, speaks volumes to the rest of the world, that the world is a place of opportunity, not only in America, but all of us can make something good out of our lives. So the symbolism is very huge.”

We saw evidence of that symbolism throughout our stay in West Africa. First in Ghana, then in Nigeria, where television sets in our hotel were tuned nonstop to CNN. News reports from across Africa touted Obama as the candidate with “local roots.” A current affairs program used the term “Obamamania” to describe the interest here in an election that has, according to one TV commentator, “electrified the world.”

Still, for all of its historical significance and cultural symbolism, Otabil has no delusions of what an Obama presidency would mean for Africa.

“I’m happy that an African-American has been invited to sit at the table, but I don’t see Barack Obama as an African hope,” he said.  “I think the hope of Africa is really in the hands of Africa and the African leaders.”

More than skin deep
Fred Odekhian [pronounced Oh-deck-hee-in] is an electrical engineer who lives in Lagos, Nigeria, the largest country in Africa.  A country that, according to Odekhian, views Barack Obama’s candidacy as a “global phenomenon” — an event he and others in Nigeria have followed daily through news reports.

Over a lunch of fish, vegetables and stir-fried rice at a Chinese restaurant down the street from our hotel, Odekhian, 43, also made it clear that his interest in Obama is more than skin deep.

“My support for Obama is not because he’s a black man. My support for Obama is because of what he represents,” says Odekhian. “[Obama] demonstrated a lot of interesting character over the course of this campaign.  His ideology, his personality, his temperament, his ability to be able to stand in the face of obvious and unnecessary provocation — all of that has revealed that he is  going to come up with a style of leadership that will have a positive global influence.