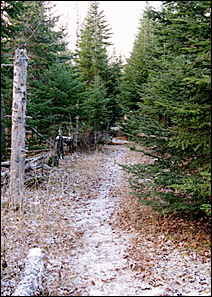 MinnPost photo by Catherine Conlan
A dusting of snow rests on a hiking and snowshoe trail near the Lake Superior Hiking Trail on the North Shore northeast of Two Harbors.

TWO HARBORS, MINN. — Despite a weak economy and high gas prices, tourist agencies in Minnesota’s Arrowhead region — a favorite for Twin Cities travelers — say summer turned out well, fall colors gave October a boost, and they expect that the upcoming holiday and winter season should continue with decent numbers.

“We had a great summer,” said Terry Mattson of Visit Duluth. “There was a slow start … but our August was a great tourism month. It’s been a challenging year for tourism and all sectors of the economy, but we’re definitely faring better than most.”

Resorts and attractions up north say that for people in the Twin Cities, they straddle the line between far enough for a vacation and too far to drive when gas prices are high. This is especially true for Duluth, Mattson said.

“The bulk of our market comes from within a two- to three-hour drive,” Mattson said. “The effect of fuel prices is negligible. There probably is some threshold, but from a psychological standpoint, consumer confidence is more important for us.”

Still traveling, but spending less
Once they arrive at their destination, some travelers are spending less on vacation goods and services these days.

“The bottom line is, people have always needed to travel or get away,” Mattson said. “We see more a change in habits — more of a shift toward fast food instead of a restaurant, entrees that are lower priced as opposed to higher priced.

“Spending is still up there, but people are being a little more value-conscious.”

Linda Johnson, managing director at Giants Ridge in Biwabik, said she’s seen that spending pattern this year. “People are still coming,” she said, “but they’re spending less on merchandise and food. That’s certainly what we’ve seen in our business.”

Nancy Burns, owner and marketer at Lutsen Resort, said their summer-season food receipts were stronger than last year’s, “But one of the other restaurants in the area was closed this summer because of renovation, and we may have seen the effect of that,” she said.

A beautiful fall helped
“We actually had a solid summer; it was up slightly over the year before,” Burns said. “July and August were good months, weather-related. We had a beautiful fall up here, and a very solid October: In terms of guests, we are actually slightly ahead of last year.”

Johnson said total revenue so far was down about 5 percent from last year, but that their season-skiing-pass sale had gone better than expected. “We were kind of holding our breath, because it’s kind of a pulse of what the consumer is going to do and what the market is going to do,” Johnson said.

“It was a strong pass sale. We were up 6 to 10 percent in the different offers” such as alpine or Nordic skiing.

Fall colors were good this year on the Range as well, leading to a good turnout, said Cheyenne Denney of the Iron Range Tourism Bureau. “We had a decent fall,” she said. “The fall colors were the best we’ve had in a couple of years, and we did see more traffic. Last year I don’t think the leaves even peaked, so this is an improvement.”

Hoping for a snowy winter
She said she “wouldn’t be able to guess” if gas prices played a factor in people driving up to the Range for summer activities, which include golfing, ATV trails, hiking and mining attractions. A snowy winter helps Iron Range tourism for cross-country and downhill skiing, hiking, snowshoeing and snowmobiling.

“Through September, our lodging tax report was up almost 6 percent, which was good, frankly, because it was a cold spring and summer got off to a slow start,” Brostrom said.

“I think that a lot of people in Minnesota stayed in Minnesota for their vacation, so Northeastern Minnesota in general held its own,” Brostrom said. She said that many lodging businesses in the Grand Marais area are mostly basic motel rooms, and so the area tries to draw visitors with events throughout the year.

“That’s all the more reason that we hold these things — the art fair and Dragon Boats in July, the Fisherman’s Picnic in August,” Brostrom said. “Other events that are created by organizations, such as our art colony, have a lot of importance because our lodging doesn’t have the capacity to be an event themselves.”

Johnson at Giants Ridge said she thought more people were staying close to home for their vacations. “What we’re looking at is those luggage fees,” she said, referring to the charges many airlines are putting on even one piece of luggage. “If you’re going on a ski vacation out west, and you look at the fees for luggage and snowboards and skis — that’s just another piece of your spending money. Maybe they’ll stay closer to home and travel in a car instead of a plane.”

In Duluth, ‘stars and planets lined up’
Several “marquee” events, including FinnFest in July and the visit from three tall ships as part of the Maritime Festival in August, helped boost lodging and restaurant receipts in Duluth, Mattson said.

“We’ve always pushed for those sorts of things, and this year we had so many events,” Mattson said. “The stars and planets lined up, and with the economy the way it is, we gave people a good reason to come here. It worked for Duluth. Our August was the greatest tourism month. We had huge increases in demand and occupancy; I think it grew 8 or 9 percent. Even to affect numbers by a percentage or two in peak demand is a big deal.”

While Duluth itself isn’t affected as much as the skiing and snowmobiling resorts by a brown winter, Mattson said it can still be a factor.

“If we have a normal winter weather-wise, we’ll track well through that,” Mattson said. “Everyone’s pretty cautious because of the economy.”

Meanwhile, at Giants Ridge, “We’re optimistic,” Johnson said. “The weather’s cooling, and we have the snow guns ready.”