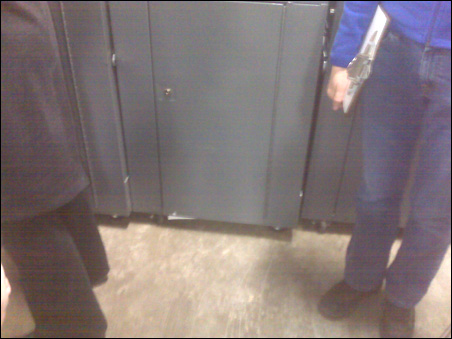 Photo provided by Al Franken campaign
See the tiny sliver of white protruding from under a black door? Franken’s campaign says it is at least one ballot that an election judge in Minneapolis has refused to count.

Today, in the pre-game shows for Wednesday’s key State Canvassing Board match-up, the Norm Coleman and Al Franken legal surrogates were as quotable and definitive as they’ve ever been.

Today in RecountLand, we heard more charges of missing ballots, more concern about so-called frivolous challenges, more hints of further legal action and more disputes about which of the two U.S. Senate candidates is actually ahead as the recount continues.

Coleman’s ahead by about 200, says his recount lawyer Fritz Knaak.

Franken’s behind by only 84 votes, says his recount lawyer Marc Elias.

As day turned to night on this pre-Thanksgiving Tuesday, votes were still being recounted, although the process is moving into the final stages, with more than 80 percent accounted for.

• Wednesday at 9:30 a.m. in Room 200 of the State Office Building, the State Canvassing Board — made up of Minnesota Supreme Court Justices Eric Magnuson and G. Barry Anderson, Ramsey County District Court Judges Kathleen Gearin and Edward Cleary, and Secretary of State Mark Ritchie — will convene.

They are expected to deliberate on and decide the fate of rejected absentee ballots. This is something the Franken side wants to see happen. The Coleman side rejects the inclusion of these as part of the recount. (See accompanying PDFs at upper right.)

The proceedings will be webcast here.

• One skirmish today set the stage for Wednesday.

The Franken campaign submitted an affidavit to the Canvassing Board from DFL Party operative William Howell.

In it, he details how the campaign has now received lists of rejected absentee ballots from 66 counties. He notes the somewhat strange and idiosyncratic reasons that some were rejected, including one in Itasca County that notes a ballot was rejected because, according to an election official, “We screwed up and somebody put it in the reject pile.”

Total number of rejected absentee ballots from those 66 counties? A whopping 6,432, said the Franken campaign. Elias emphasized not all were rejected wrongly, nor can we assume whom the voters chose. But that’s a heckuva lot of ballots for the Canvassing Board to ignore.

If the Canvassing Board allows those rejected ballots to be part of this recount …what a mess that’s going to create! Elias again declined to outline a process he has in mind, but, clearly, he has one.

• As for the Franken campaign’s claim that its candidate was behind by only 84 votes during the day: Franken’s team arrives at that number by including decisions made by election judges at each recount site; that is, even if challenged, the Franken campaign believes that impartial rulings at various precincts will be accepted by the State Canvassing Board next month.

Those decisions are not included in the secretary of state’s official count.

“We hope you’ll treat these numbers with the same credibility that we would treat sightings of Bigfoot,” said Knaak.

• Another skirmish: The Unexplained Cases of the Missing Ballots.

This story line began Monday and continued today as the Franken campaign spoke of “hundreds of ballots” gone missing from Hermantown to Hopkins, from Becker County to Minneapolis.

Elias said: “Our concern is not alleviating but is growing . . . [ballots] are missing and appear to be disappearing.”

He displayed a photo showing what looks like a ballot or ballots at the bottom of a Minneapolis voting machine, but no election official will count them, Elias said.

Of course, there is a sequel to this predicament: The  Cases of the Unexplained Found Ballots.

Of missing ballots, Knaak said, “Immediately the alarms will go off, shields up, here come the Klingons, that kind of thing.

Then, you realize you have to be patient . . . Generally [the ballots] do surface.”

Proving Knaak’s point, at 11:44 this morning, reporters covering the recount received this urgent message via email.

“On Nov. 21, the City [of Crystal] discovered a discrepancy in its ballot numbers and subsequently found eight unopened absentee ballots bundled with accepted absentee ballot envelopes.  Minnesota and Hennepin County election officials were immediately notified and candidate representatives were informed at a reconvened recount session on Nov. 24 at Crystal City Hall.

All eight absentee ballots are from Ward 4, Precinct 2.  Seven votes were for Al Franken; one vote was for Norm Coleman. These are not rejected ballots and were inadvertently overlooked by election judges.

“This was not a deliberate action but rather an honest mistake during an election with a huge turnout,” said City Clerk Janet Lewis.”

This, presumably, is how most of the missing ballots will be found. In Crystal, 1,543 absentee ballots – twice the usual amount – were cast with a citywide turnout of 94 percent.

But “missing ballots” are sure to be a theme if and when this election finds its way into the courts.

• Which leads to Wednesday’s legal slugfest before the Canvassing Board.

Board members won’t take oral arguments from the lawyers. They will ask questions of both sides. They will hear diametrically opposite points of view.

The Coleman/Knaak view is simple and steadfast: The board is “ministerial.” The law states the board shouldn’t rule on the worthiness of rejected absentee ballots, Knaak says. That’s for a court to decide, not an administrative body like the board.

So, Knaak was asked, there’s no gray area on this?

Knaak, a former Republican state senator, even found time to praise the once-left-wing Star Tribune, which sided with the Coleman camp in an editorial today.

But Elias sees no gray either.

He said the board “clearly has the authority” to consider the rejected absentee ballots. “They know they have the authority because they’re going to make a ruling . . . They clearly can.

He went on – and you can just hear him saying these very same words to the Canvassing Board members Wednesday and, weeks later, to a Minnesota or federal court: “It would be an extraordinary state of affairs for the state of Minnesota to declare [the board] legally incapable of counting every lawful ballot . . . I think it highly unlikely that the Canvassing Board is going to declare itself statutorily or otherwise incapable of making sure that every Minnesota lawful ballot was counted.”

• Mobilizing … just in case.
Despite being confident that the Canvassing Board is going to side with him, Knaak acknowledged today that his side is preparing for the eventuality that the previously rejected ballots will be accepted.

While it was the Franken crew that sought the names of the voters whose absentee ballots were turned down – and won to get them in court – the Coleman team had previously pooh-poohed the need for such details. No more.
They are no longer setting aside the data. They are beginning to analyze.

“We want to have our proverbial ducks in a row,” said Knaak, “anticipating that the Franken campaign is moving towards a judicial challenge. We will be ready.”

• What are you doing New Year’s Eve?

The U.S. Senate is set to convene on Jan. 6. Assuming that various Canvassing Board and legal challenges ensue, could we still be chatting daily with Mssrs. Knaak and Elias come 2009?

What others are saying

Here are a few all-over-the-map links to get a feel for what others are saying:

• Sean Hannity on the recount, with some counter-analysis.

• In Mower County, it got nasty.

• What they’re saying at Politico.

• Somebody makes fun of us.