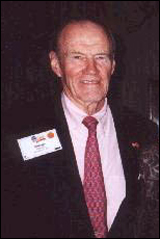 A grand old Republican, George Pillsbury, was planning to wear his GOP, elephant-covered tie to a luncheon today. But on Tuesday, he’ll be voting for Democrat Barack Obama for president.

“First time in my life I’ve voted for Democrat for president,” said the 87-year-old Wayzata resident this morning.  “I not only concluded I would vote for a Democrat, but that I would announce what I’m going to do before I vote.”

Two major issues — the U.S. relationship with other nations and abortion — moved Pillsbury to Obama.

The war in Iraq has troubled Pillsbury so much that in 2004, he refused to vote for the re-election of President Bush, but he didn’t vote for Democratic challenger John Kerry, either.

“I just left that part of the ballot blank,” Pillsbury said.

The other major issue that moved Pillsbury to Obama is abortion. Before Roe v. Wade, Pillsbury, a strong believer in family planning, supported a woman’s right to have a legal abortion. As a state senator in 1971, he wrote legislation that would have put harsh penalties on “back-alley, coat-hanger abortions.” But that same bill would have allowed physicians to perform legal abortions.  The legislation went nowhere.

Pillsbury was upset when he received a recent mailing from the state Republican Party, urging people to support Republican candidates.

“On that mailing, were the words ‘Vote Pro Life,”’ Pillsbury said. “… So many moderates in my party feel left out.”

Laughing, Pillsbury said that he’s had a large, family network nudging him toward Obama.

“I’ve been persuaded by my 10 grandchildren,” he said. “Many of them are working all over the country for Obama.”

Pillsbury implied that he won’t vote Democratic all through the ballot, but he may not vote Republican, either.

“I may vote for the independent candidates,” he said of how he’ll vote in the Senate and 3rd District congressional races.