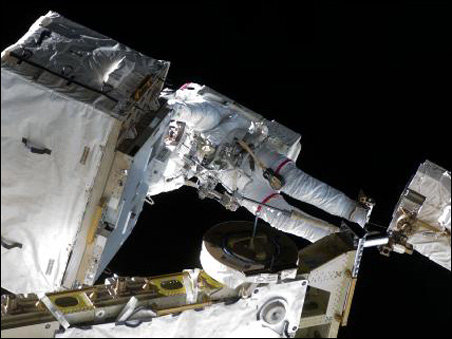 Photo courtesy of NASA
Anchored to a foot restraint, Stefanyshyn-Piper works on the space station.

Adelheid Stefanyshyn was not surprised to see her astronaut daughter successfully complete a grueling spacewalk on Saturday despite an earlier mishap in which a $100,000 tool kit had slipped from her grasp and drifted into space.

“She does not quit,” Stefanyshyn said on Monday.

Maybe that’s because Heide Stefanyshyn-Piper acquired a certain tough mindedness growing up in St. Paul’s brutal winters. The fact that she was only girl in a family with four boys played a role too, her mother said.

Stefanyshyn-Piper, 45, was the first woman from Minnesota to launch into space and the sixth American woman to walk in space when she served as a crew member on the space shuttle Atlantis in 2006.

Now she is the lead spacewalker on the shuttle Endeavor’s 15-day mission to the International Space Station, which is scheduled to return to Earth next Sunday.

Stefanyshyn-Piper explained the runaway tool kit in an AP video (below) posted on YouTube. She and fellow astronaut Steve Bowen were on a space walk to clean and lubricate gears on a space station mechanism. Grease had oozed from a grease gun in her tool bag and slimed over other tools. In the process of trying to clean up the mess, she lost her grip on the tool bag which would have weighed 30 pounds on Earth but floated away weightlessly in space.

Her mother, who has exchanged e-mails with Stefanyshyn-Piper, said her daughter’s first instinct was to lunge for the bag.

“But her brain was working fast, as usual,” Adelheid Stefanyshyn said, expressing relief that her daughter did not risk floating away in pursuit.

In the video, Stefanyshyn-Piper said, “You can’t dwell on mistakes.” But she added that “it was hard coming back in (and) having to face everybody else.”

Her fellow crew members, though, treated the loss as part of the job. Bowen said on the video that he was as much responsible as her for the mishap because he had made the final check on the tool bags. And Endeavor commander Christopher Ferguson said: “We’re jacking up the International Space Station, taking the wheels off, and we’re bound to get a little dirty, a little dusty and meet a few surprises along the way…. I think we’ve weathered this one just fine and come back with a lot of confidence.”

Grueling space walk
On Saturday, Stefanyshyn-Piper and Bowen were back at their tasks. They spent nearly seven hours cleaning and greasing up a 10-foot wide gear that rotates the station’s starboard solar wings so they always face the sun, Space.com reported.

“It was the third, and most grueling, space walk dedicated to the task,” said Space.com senior editor Tariq Malik.

Having completed it, Stefanyshyn-Piper has now logged 33 hours and 42 minutes to make her the United State’s second most experienced woman spacewalker, behind fellow NASA astronaut Peggy Whitson, Malik said, and she “ranks 25th on the list of the most experienced spacewalkers in the world.” 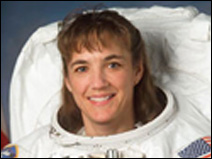 As a girl growing up in St. Paul, Stefanyshyn-Piper never expected to become an astronaut, let alone achieve such distinction in space, she said in an interview with me in 2002.

“I can’t say that I was one of those people who from the age of six always wanted to be an astronaut,” she said.

Only men had been chosen as astronauts at the time. But Stefanyshyn-Piper did excel at other endeavors men dominated. She was a whiz in math and science at St. Paul’s Derham Hall High School, where she graduated in 1980.

After Massachusetts Institute of Technology accepted her, “I needed to figure out a way to pay for it,” she said. So she enrolled in Navy ROTC, landed a Navy scholarship and eventually dreamed of becoming a Navy pilot. But nature got in the way. She failed the eye test on the Navy’s physical exam.

So she went the other way, plunging into the seas. With a master’s degree in mechanical engineering from MIT, she went to a Navy dive school and landed work repairing ships and working on major salvage projects.

In the 1990s, her skills and NASA’s needs began lining up perfectly. Work on the International Space Station called for space walkers with mechanical skills.

“The jobs they were advertising looked more like diving than flying,” she said.

She was selected as an astronaut in 1996.

‘Wow! That’s home’
In a NASA interview, she described her first thrill at seeing Earth from space in 2006: “The way our altitude was, you could look off and see the horizon, the end of the Earth, the atmosphere and then beyond it . . . just pitch black, just black space, and you think, ‘Wow! That’s home. That’s our planet.'”The way our attitude

NASA has dubbed the current mission as an “extreme home improvement” project.

When it is complete, the space station will have all of the key systems needed “to turn what is now a three-bedroom, one-bathroom home for three into a five-bedroom, two-bath residence for six,” NASA said.

On Monday, the astronauts completed the fourth and last of their space walks for the exterior work. One astronaut, Sandra Magnus, is to stay at the Space Station until February. The other crew members are pilot Eric Boe and mission specialists Donald Pettit, Shane Kimbrough and Greg Chamitoff.

NASA’s mission control notified the astronauts Monday that their work will be extended by one day, scheduling the Endeavor to undock from the space station on Friday and land back on Earth Sunday.

Meanwhile, space watchers back on Earth are having a hoot over that loose tool bag in outer space.

A posting on E-Bay (later removed) claims the bag “fell safely to Earth and landed on a golf course in Minnesota.” Found inside, it said, were “remnants of one of the grease guns, a white rumor cell phone for outer space texting, a compact mirror, a hot chicks vote Republican Sarah Palin button, lipstick (are there pitbulls in outer space) and some space type tool.”

Plenty of skeptics were questioning the $100,000 price tag on a bag of tools.

The Houston Chronicle, where NASA coverage is hometown news, said the cost was “mainly because of high labor costs in the design and testing of the equipment.”