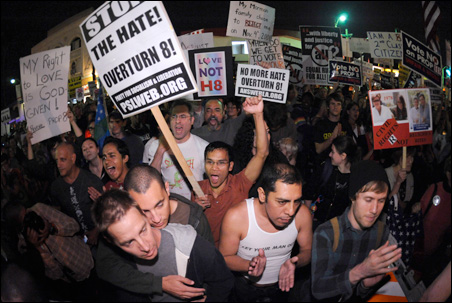 In a state long known for being one of the most gay- and lesbian-friendly states in the country, why hasn’t there been a recent court case supporting the idea that marriage should be a right for all couples?

“We’re all about marriage equality,” said Phil Duran, staff attorney for Outfront Minnesota, an organization that pushes for rights for gay, lesbian, bisexual and transgender people. “But litigation is NOT a good idea at this time. I find this personally frustrating. I went to law school because I wanted to rattle cages, but …”

When couples who want to go to court to win the right to marry come to Outfront, they’re told, “Not yet.”

“They come here,” said Duran, “and every time it seems like it’s the same: They’re good people, they dream of a solution, they have rational arguments and we have to explain that it’s not time.”

Massachusetts has marriage equality. Connecticut, too. California had it and lost it again because of a woman-man marriage amendment that passed in the last election, but most believe that the constitutional amendment will be challenged in the courts and/or go before voters again within a couple of years.

Even Iowa’s Supreme Court will be hearing a marriage-equality case on Dec. 9.  In that case, a lower court ruled in favor of marriage equality a year ago, but the ruling was put on hold, pending the outcome of the decision of the Iowa Supremes.

But not in supposedly gay-friendly Minnesota.

“It stands as precedent,” Duran said. “It casts a shadow over what we’d like to do.”

A quick review: On May 18, 1970, two University of Minnesota students, Richard John “Jack” Baker and James Michael McConnell applied to Hennepin County District Court clerk Gerald Nelson for a marriage license. He denied the application, because the applicants both were men.

Baker and McConnell sued Nelson, claiming Minnesota law on marriage made no mention of gender. The trial court was not impressed with the argument, agreeing with Nelson. The state Supreme Court agreed with the lower court. When Baker-McConnell went to the U.S. Supreme Court, the couple was rebuffed again. The Supremes, in 1972, dismissed the case “for want of a substantial question.”

Baker v. Nelson has been used in other states as precedent to block efforts at marriage equality.

The couple has never really stopped going to court. But Baker and McConnell are seen as being at the far fringes of the gay rights movement in Minnesota, a problem more than a solution.

“They were way ahead of their time,” said Duran, diplomatically.

Movement’s approach: One step at a time
Most of the state’s mainline gay rights organizations now believe that it’s better to lead the state to marriage equality one step at a time, but not make the mistake again of jumping ahead too far. The last thing that’s needed, they believe, is a contemporary court to affirm Baker v. Nelson.

In fact, there have been small steps backward since Tim Pawlenty, who as a state legislator was a supporter of GLBT civil rights, became governor. Pawlenty twice has vetoed bills that would allow local governments to provide domestic partnership benefits to employees. Those rights were won when Jesse Ventura was governor. Pawlenty is on record as saying he supports a constitutional amendment that would define marriage as being between a man and a woman.

Not all in Minnesota share the incremental approach of the major organizations. Not all even really believe Pawlenty is a deep-down foe of marriage equality.

“Things are changing so quickly,” said Doug Benson. “Pawlenty’s a political animal, and he’s not stupid. I think he realizes that opposing rights is not a good place to be if you want to be a national presence.”

The efforts of building the group and pushing for a court case, or legislative action, is moving forward, Benson said, despite warnings from Outfront and other GLBT rights organizations such as Project 515. (That organization is named for the 515 Minnesota statutes they claim discriminate against GLBTers.)

Family Council among groups opposing same-sex marriage
Meantime, the efforts of such organizations as the Minnesota Family Council to block any steps toward same-sex marriage are continuing. Tom Prichard, executive director of the Family Council, said he expects some legislators to at least propose the amendment during the upcoming session. But Prichard doesn’t expect the Legislature to be very receptive to spending much time with the issue.

“Obviously, with the DFL in such control, it will be a great challenge,” said Prichard of trying to push the amendment. “But the Republicans who are there are more conservative than before.”

Prichard’s organization has fought every step of legislation that expands rights for GLBTers.

There’s a flier, sent out by the Family Council, posted on the wall at the Outfront office as a reminder of what those who favor expanded rights face.

The flier is headlined “Incremental Approach to Legalizing Homosexual Marriage.” The flier shows figures of two men going up the stairs toward a goal of same-sex marriage.

Hunting & fishing licesnes?  Ducks and walleyes are a threat to heterosexual uber-rights?

Monica Meyer, public policy director for Outfront, said that something so basic as family fishing licenses are a wonderful tool to enlighten all sorts of people about inequities in state law.

The fact that longtime Minnesota couples of the same sex can’t get family hunting and fishing licenses has opened the eyes of a lot of anglers and hunters in places that might not be considered gay-friendly, she said.

“There’ll be a (same-sex) couple who have been fishing together for years, and they’ll be talking to some other fishermen,” Meyer said. “The subject of licenses will come up, and the fishermen will be surprised. ‘You can’t get a family license? That’s just wrong.”’

Meyer is of the belief that Minnesota is a more GLBT-friendly place than ever before. In her travels around the state, she said, there is growing support for across-the-board equal rights.

There are hopeful statements about the Minnesota mindset in a statement from Outfront and Project 515.  The statement cites a 2006 survey conducted by Decision Resources Ltd. that found: “Nearly eight of 10 Minnesotans said government should treat people no differently because of their sexual orientation. Almost 70 percent of Minnesotans agreed that ‘gays and lesbians should have the same rights and responsibilities as everyone else.’ ”

Still, both she and Duran have concerns about a backlash. They point to the re-election of Rep. Michele Bachmann as a reason for GLBT rights advocates to be wary. They look at an adoption amendment in Arkansas that passed this November that is chilling: The amendment says only married couples can adopt and, of course, in Arkansas only a man and a woman can marry.

Other reminders that it’s not safe to assume that most Minnesotans are ready for marriage equality came in the passage of amendments this month in California, Arizona and Florida that restrict marriage to man and woman. That raises the total of states with such amendments to 29.

There’s not much legislative will for such an amendment in Minnesota at this time, Meyer believes.  But neither is there much will among legislators to talk about marriage equality.

Outfront and other organizations may try to make some small steps — perhaps even try to test Pawlenty on domestic partnership benefits again — but there will likely be no big steps.

“Not yet,” remains the warning of most mainline GLBT organizations.