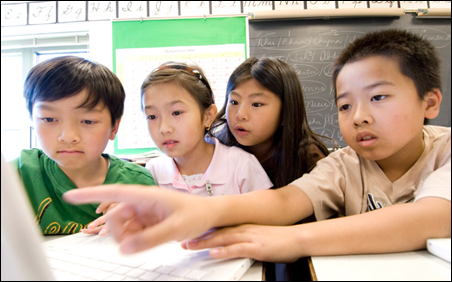 Racial diversity wasn’t an issue in the Osseo school district not long ago. Almost every student was white.

Osseo and other suburbs far afield from the inner-city St. Paul and Minneapolis school districts now sport a rainbow of skin colors and ethnic backgrounds, a change some accept easily and others don’t.

As Carol Fischer, a teacher at Osseo’s Weaver Lake Elementary: A Science, Math and Technology School, tells her fourth-grade pupils, “We are all different, we are all the same.”

That may be true, but the demographic transformation hasn’t made Osseo school officials’ jobs any easier. As minority populations rise dramatically in Osseo and other suburbs, school officials are struggling to deal with the same ramifications — widening academic achievement gaps, student poverty and parental backlash — that officials in urban districts began confronting in the 1970s.

But unlike the integration debates of the past, aggressive efforts like busing are off the table, and now few on either side mention race — though it is often the elephant in the room when officials re-draw school attendance boundaries or close or reorganize schools.

Still, the racial makeup of the Twin Cities’ suburbs is dramatically and quickly changing.  In 1995, only 8 percent of children attending suburban schools were minority. Today, children of color make up 23 percent of the suburban school population.

Of the metro area’s 894 suburban schools, 114 are schools where a majority of students are nonwhite. And the suburbs are home to 22 segregated elementary schools, an important indicator of the future makeup of school population. In addition, 45 schools are considered “racially identifiable,” a legal definition of segregated under a complex state rule.

Demographic changes
Numbers compiled by school districts and collected by the state Department of Education tell the story 10 years ago and now. In 1998 in Richfield, for example, whites held an 86 percent majority but now they number 38 percent. Minority enrollment in Burnsville climbed from 7 percent to 34 percent, in Hopkins from 8 percent to 28 and Bloomington from 7 percent to 36 percent over the last decade.

It’s a similar tale in St. Paul’s suburbs over those 10 years. Students of color in the North St. Paul-Maplewood-Oakdale district increased from less than 5 percent to 31 percent and in Roseville from 9.6 percent to 34 percent.

Further, that diverse student mix will continue to increase statewide, according to government demographers. In Minnesota, between 2005 and 2015, the white population is predicted to swell by a mere 7 percent while non-white populations will grow 35 percent and the Hispanic population will double.

These demographic changes are apparent in maps prepared by staff at the University of Minnesota law school’s Institute on Race and Poverty. Using data supplied by school districts to the Department of Education, the maps illustrate steady movement of persons of color into suburban areas, as well as increasing poverty as measured by growing numbers of students who qualify for the free or reduced-fee school lunch program.

In addition, the institute’s research shows, many metro communities and neighborhoods are segregated by race, a portent of trouble when it comes to integrating schools, said Myron Orfield, executive director of the institute and a law professor, in a 2007 study.  Simply put, Orfield said, “we are a white place that is just at the beginning of this happening in the suburbs.”

A generation ago suburban school districts were so homogenous that if you had to shuffle students around to solve school crowding problems, you “just re-drew the boundary lines” with little reaction, recalled Ted Blaesing, recently retired White Bear Lake Schools’ superintendent.

But today, educators need to look at race, socio-economic status and even country of birth in drawing those lines to even out students’ educational needs.

Magnet schools are cropping up around the metro area in an attempt to mix students of various races, ethnic backgrounds and socioeconomic classes. Districts are also setting up other programs to create opportunities for kids to interact with those of different backgrounds.

And those decisions produce stress and sometimes anger from parents.

Osseo: A case study
What’s going on in the Osseo school district is an example of what’s increasingly being played out in suburban districts across the metro area.

To save money in the wake of a failed levy effort last year, the district took actions to cut the budget by $16 million, including relocating a magnet school from the diverse, working-class east side of the district to tony, whiter Maple Grove on the west side. Many west side parents got hot under the collar when they lost their neighborhood school, Weaver Lake, and protested loudly.

Some voted with their feet, transferring children around or outside the district, enabled by the state’s open enrollment law. Only 65 of 484 children who last year attended Weaver Lake stayed as the school transitioned from an 83-percent white neighborhood school to a magnet school with 55 percent white students.

In the process, other districts benefited. This year, Wayzata — an 81-percent-white district — accepted 125 new students from Osseo, mostly elementary-school age.

State school aid to the tune of about $6,000 follows each student, so districts implementing measures parents don’t like — including integration — are penalized.

Some parents in Osseo also got political. Ten candidates competed for the seats of three incumbent Osseo school board members this November. Last summer, a handful loudly protested renewal of Superintendent Susan Hintz’ employment contract, though the board renewed it.

Sometimes those who object to school officials’ efforts hide behind cloaks of anonymity, setting up anonymous email accounts and voicing their views only if they don’t have to identify themselves.  (As tensions grew in Osseo, board members received this email message: “Please keep pour [sic] children in their own neighborhood.”)

In many districts there are new websites to watchdog district officials carrying only the name of an organization. In Osseo, a website called Families for Neighborhood Schools or District 279 United http://fiins.district279united.com/fiins/index.cfm  surfaced.

Osseo officials dispute the idea that moving the magnet to Weaver Lake was part of a new desegregation effort, though the magnet has long been part of the district’s public desegregation plan required by the state, and part of the Northwest Suburban Integration District.

The relocation was about reducing operating costs after taxpayers voted down the tax levy, said administrator Don Pascoe.

And there are many supporters of Osseo’s magnet school, including those who like the new Maple Grove location, a larger school and plenty of wiring to accommodate lots of student laptops. The school has attracted about 150 more students to the program, including 50 from outside the district. And there’s “a waiting pool,” said Weaver Principal Gretchen Peel.

Maple Grove parent Mary Ellen DeBois, who is white, sends her three children to Weaver because she likes the math, science and technology focus and inquiry-based teaching methods that gets kids thinking and learning.  “My kids come home and they talk endlessly about school,” she said.

But race doesn’t enter their conversations, she said. “My hope for them is that my kids don’t get it,” that they don’t understand “the fuss” last winter about bringing a diverse student body to Weaver Lake, she said.  “My husband and I hope we’ve been successful in teaching that the color of skin is no different than the color of hair.”

Another mom, Michelle Johnson, who volunteers at Weaver Lake, said having her children there had nothing to do with cultural differences and everything to do with it being a science, math and technology school.

Worries over behavior problems
Still, many parents calmed their concerns about Weaver Lake by sending their children to Wayzata schools this year.

Parent Shellie Tyron of Maple Grove said this summer it was the achievement gap that bothered her. She feared that many children from the east side of the district coming to the magnet would not be “up to grade level,” while her children are “at the top” of their classes academically. She worried their academic needs wouldn’t be met in the push to help children below grade level.

Some parents argue, in suburban districts now and in inner-city schools so many years ago, that if nonwhites and white students have equal resources, it’s OK if their schools are not integrated.

“They do have equal education, very equal,” Tyron said, talking about children on the diverse east side of the district, compared with mostly white kids on the west side.

Are these kinds of parental concerns linked to race?

“No one would ever call that out specifically. I think there is a sense of ownership in their schools and change is hard,” said Osseo School Board chairwoman Kim Green, adding that there is broad-based support for the district.

And with change come growing pains. “As our district changes, we’re just a microcosm of our community,” Green said. “If we can manage our diversity well, it makes us stronger. If we can’t, it deepens the divide. I believe this will be our children’s world. We can either learn to manage diversity and it can enrich us, or it will divide us.”

At the grassroots level, in the classroom, Weaver Lake teacher Carol Fischer sees signs of success.

“Notice how well-behaved they are?” said Fischer, pointing to her African-American, Asian and white students. They’re gathered in diverse teams, sitting shoulder to shoulder, intent on charting the growth of monarch butterflies on laptop computers.

For these 9- and 10-year-olds, a compelling science lesson trumps race, she said.

Thursday: State and educators can’t agree on how to spend integration funds

Friday: A better way to integrate schools: by race and class

School integration through the years

By Cynthia Boyd and Beth Hawkins