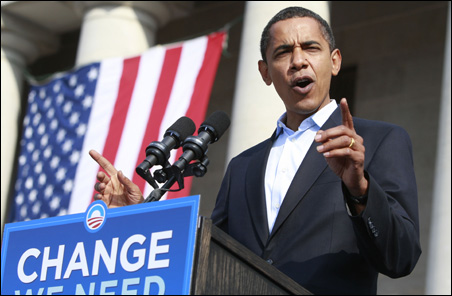 It did not surprise me when I read on AllAfrica.com Friday that Sen. Barack Obama’s Kenyan grandmother had cut off interviews because she was exhausted from the media swarm to her remote village in western Kenya.

I saw enough Obamamania while on assignment in Kenya last month to convince me that a good share the people in the homeland of Obama’s father will — like Mama Sarah — be glued to news of far-away U.S. election returns this week.

In Nairobi you can find a veritable bazaar of Obama trinkets and sales pitches. One of my favorites was the rush on an East African Breweries beer named Senator. A bartender in Kisumu told the Financial Times, “People now say ‘I want an Obama’ when asking for Senator.”

I was in the western city Nakuru, on Oct. 7 when Kenyan authorities scooped author Jerome Corsi from his hotel in Nairobi and gave him the bum’s rush to the airport.

Authorities said Corsi was detained because he didn’t have the right visa. Everyone I talked to assumed the real reason was that Corsi had written the highly critical book “The Obama Nation: Leftist Politics and the Cult of Personality.”

The legal proprieties didn’t matter to the staff at my hotel. They were positively giddy at the news, which was splashed across the front pages of local newspapers.

Visit to the countryside
My most memorable Obama moment came, though, on a day when two Kenyan companions and I drove for hours along a rutted, washboard road through the country’s western highlands to talk with farmers from the Maasai tribe.

To be sure, a few Maasai people stood for photos in the provincial town of Narok, adorned in traditional costumes. It was a commercial photo-op for tourists enroute to Masai Mara National Reserve, and it didn’t count for me.

In the more remote countryside, we met several Maasai farmers on the semi-arid highlands they have called home for generations. The landscape looked like South Texas without the prickly pear and with scrub versions of the flat-top Acacia trees in place of the mesquite.

Most of the Maasai people gathered there wore handsome beaded jewelry and colorful shawls. Many had large holes pierced in their ears. All of the men and boys carried long sticks.

The first break in their reserve came because, like farmers everywhere, they welcomed a chance to gripe about their crops. I had been sent by the Pulitzer Center for Crisis Reporting in Washington, D.C., to cover a wheat disease that is ravishing crops in Kenya. (See the Pulitzer Center’s web site for more of my blogs from Africa. And watch MinnPost.com for the crop story in a few weeks.)

One of the farmers, Edward Kosen, leaned on his long stick and described the stem rust disease that has attacked his wheat for three years, slashing yields and alarming wheat experts worldwide. Soon the other farmers crowded in. Suddenly, everyone wanted to be interviewed. 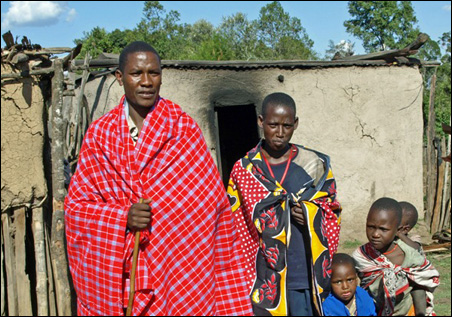 MinnPost photo by Sharon Schmickle
Edward and Nomesenyik Kosen at home with their children.

Women, kids and farmers alike giggled nervously into the lens. They insisted on posing. Nothing I said could convince them to carry on with ordinary activities while the camera pointed at them. So they stood stiffly together while I clicked away.

Then Kosen agreed to take us to his house. It was a treat even for my Kenyan companion, Ruth Wanyera, who had never seen the inside of a traditional Maasai home, called a kraal.

It turned out that Kosen had two houses. One, a wooden shanty, was for his second wife.

But he took us to the traditional homestead where his first wife and kids lived. It was surrounded by rail-fenced pens for Kosen’s sheep, goats and cows.

A separate hut, for grain storage, also served as a closet for the family’s colorful shawls and other clothing. Maybe it was coincidental, but it struck me that the sweet smell of the grain functioned much like the dried flower-petal sachets we buy for our closets in the United States.

‘USA! Obama!’
Kosen’s first wife, Nomesenyik Kosen, walked into the yard with a load of firewood on her back. She didn’t like me. She thought I was British.

“USA! Obama!” the men exclaimed to her.

She ran to the grain shed, grabbed a beautiful shawl and smiled into the camera along with her three children.

And one of her neighbors invited us inside her home. Its walls were made of mud and sticks. The roof was tree bark and cow dung, hardened over the years to a cement-like sturdiness.

In the center of the small dark interior was a fire pit where the wife cooked meals. Over the years, soot from the fire had blackened the walls. Among her utensils was an animal skin bag which she filled with milk from the cow. Her husband drank from it first, we were told; she and the children shared what was left.

Her husband’s bed on one side of the pit was covered with a blanket of cow leather. On the other side was a smaller bed where she slept with the children. There were two small stools, one for her and one for her husband. And, for visitors, there was a narrow wooden bench near the doorway.

Once we were back in the sunlight, Kosen offered to slaughter a sheep in honor of our visit.

But we had to say no thank you.  After all, we were there to cover a crop failure. And these families had a lot of mouths to feed.